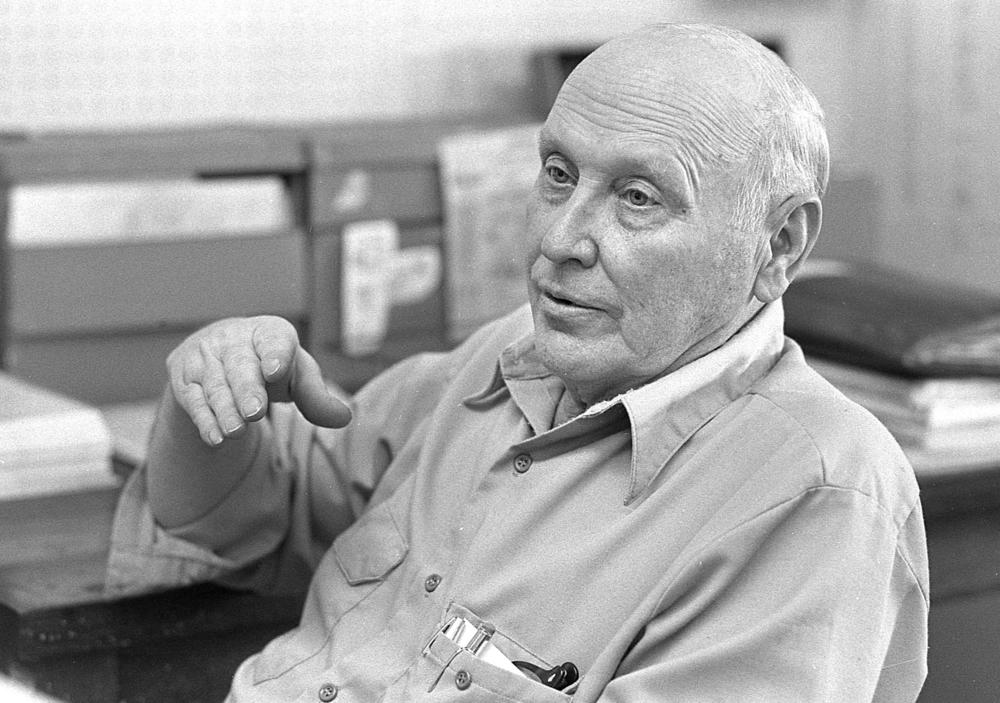 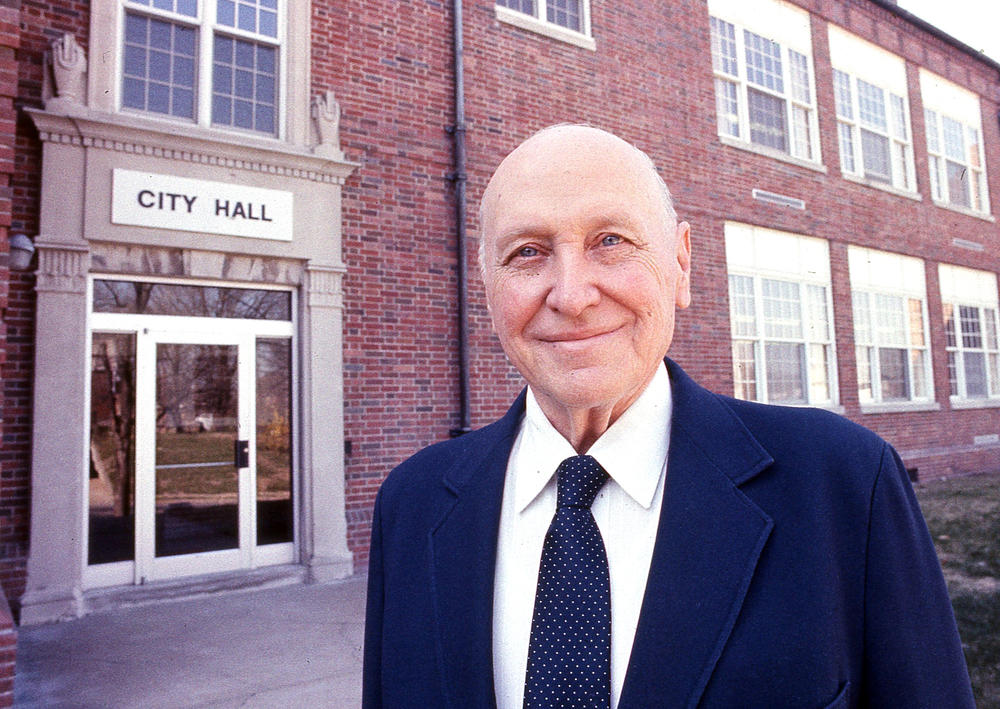 Cape Girardeau Mayor Howard C. Tooke stands in front of City Hall where he has exercised leadership for most of the past two decades. He will retire April 7, 1986. (Fred Lynch photos)

At 11:30 a.m. Monday, Howard C. Tooke will step down as mayor, ending a political career that has spanned nearly two decades and one in which his name has become almost synonymous with Cape Girardeau city government.

It's hard to imagine city government without him. He has served continuously on the City Council for the past 17 years and has held the post of mayor 13 of those years.

For a man who has given so much of his time to city government, retirement won't come easy. With municipal affairs "having occupied a good part of my time for 17 years, it (retirement) is going to leave a rather gaping hole in my life," noted Tooke, 68.

Tooke stressed he is not retiring from life. He said he plans to stay involved in other civic activities, including being a member of the board of directors of Southeast Missouri Hospital.

Tooke added that he plans to remain active in business as president of M.E. Leming Lumber Co.

In his political career, Tooke has only lost one city election. On Sept. 24, 1968, in his first entry into politics he came in fourth with 250 votes in a special city primary election.

In 1976, Tooke lost a bid for a state Senate seat to Benton Democrat John C. Dennis, who still holds the seat. That was a district-wide election.

In those years, voters elected the City Council and the council elected one of its members to serve as mayor.

But with establishment of the charter form of government, the election procedure was changed to allow voters to elect the mayor. In 1982, Tooke was elected to a new four-year term as the first mayor under charter government.

Tooke, who began his political career relatively late in life at the age of 50, said he never planned on serving on the City Council for so many years.

"I wasn't really shooting for the record," he stated. Tooke said he probably would have retired four years ago except for two things: the new city charter was just being implemented and planning was under way for the multipurpose building.

He recalled that when he began his political career he initially thought he might serve two terms on the council.

He said he realizes people think of him, not as a businessman, family man or church-goer, but as mayor. Retirement may not change that. Tooke said he expects many people will still think of him as "Mr. Mayor."

Even so, the soft-spoken Tooke claimed that "most of the honor shown me is to the office, not the man.

"In most cases, the man doesn't make the job; the job makes the man," he said.

"I was a virtual unknown in the community until I got on the council," recalled Tooke. "I don't think that I had the ability when I came on the council to direct in any manner the affairs of the city.

"I think I learned it on the job," he pointed out.

When he first became involved in city government, Tooke remembered his desire was "to keep it (local government) running smoothly with some degree of fiscal responsibility.

"I didn't come into office with any great plan to change the direction of the city at all," he noted. But, he pointed out, some things have changed--most notably city finances.

Tooke contended the "greatest step forward" for the city was passage of a city sales tax in 1970. Until then, city finances were largely dependent upon property taxes.

The sales tax provided city government with a valuable source of revenue, according to Tooke. "It probably accounted for more good things happening here than any other event," he maintained.

Operation of the City Council also has undergone a change, Tooke said. Where council sessions were once conducted almost entirely by the city manager, they are now conducted by the mayor. Tooke said he was probably responsible for that change.

"I don't personally feel I have any apologies to make for my role in it," he said. "The plan was sound" and the project has always had the support of a majority of the citizens, he said.

The project was loudly criticized by some, principally motel and restaurant owners who wanted the arena built on the city's west side rather than on the SEMO State campus.

Tooke maintained that his actions did not create the controversy. "While I hated to see the friction develop, I don't think anything I did developed it."

The mayor at times has been accused of being inflexible. Tooke said he doesn't make hasty decisions, but once he makes a decision he sticks to it.

"I can't escape being called stubborn," said Tooke. But, he stressed, "My mind is open up to the time that I've made a decision."

While making decisions can prove difficult, Tooke noted, "the rules of the game are that the council has to vote yes or no. There's no maybe."

Even so, the mayor conceded that compromise is an essential part of politics. "I think politics is the art of compromise, if it can be accomplished."

A strong supporter of local government, Tooke has always been one to let citizens speak their minds. "I think people need to be allowed to express themselves.

Tooke said he has been opposed to limiting debate at council meetings because the last person that speaks may make the "most telling point."

"People say we don't listen. What they really mean is we don't agree with them," commented Tooke.

Over the years, the mayor has consistently championed the rights of citizens, particularly the less-fortunate.

I grew up in poverty and I understand some of the problems people have," Tooke once explained to a reporter. "I think I do understand the problems of people to whom money is a problem," he said this week.

"I do think there is an element of social justice in all the decisions the council makes," asserted Tooke.

The mayor said he has consistently set aside his business needs to devote time to city business. "I have tried to put the city's business first."

Never one to pat himself on the back, Tooke said he takes pride, not in his own accomplishments, but in those of the city.

Tooke, who has been active in the Missouri Municipal League, serving on its board of directors since 1971, has never stopped promoting Cape Girardeau.

"I've been on a first-name basis with the last four governors. I've known personally the last five presidents of the National League of Cities. I think I've been a good ambassador for Cape Girardeau," he observed.

Tooke said he will never stop promoting Cape Girardeau. "I think wherever I go for at least a few years, they will say, 'Here's a fellow from Cape Girardeau.'"

From Tooke's point of view, there could be no better praise than that.