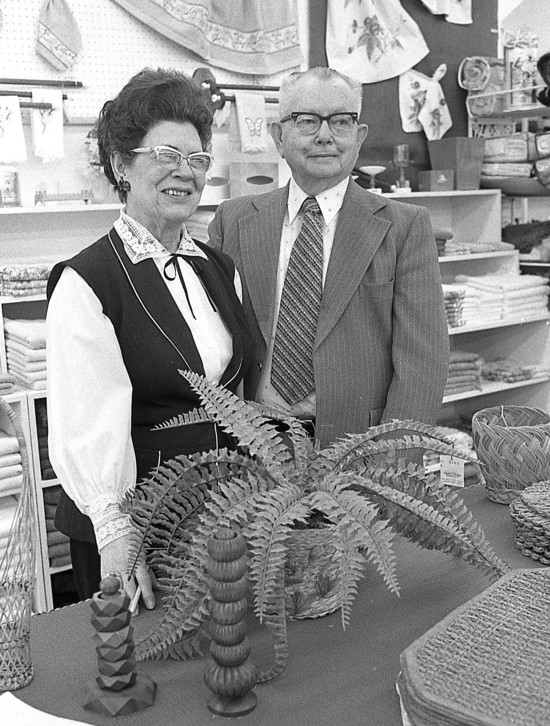 Eva and Wayne Rust pose for a photo in 1981 marking 48 years in business as a team.

Those four words were all it took from her young husband Wayne to convince Eva Rust that their future might lie in Southeast Missouri.

Wayne and Eva Rust were newlyweds in Detroit, Michigan, the year the banks closed around the country, making hard times for everyone.

They had met in Detroit, where Wayne had gone to find work, from his hometown of Rector, Arkansas. Eva had moved from Bell City with her family in the late 1920s. She had given up a teaching position in her hometown, obtained after graduating from Southeast Missouri State Teachers College in Cape Girardeau.

When the young woman and man with matching southern accents met, in the midst of all those "yankees," they just naturally were drawn to each other.

Wayne was employed by General Motors when the stock market crashed, putting him and thousands of others out of work.

"Coming home just seemed to be the thing to do," Mr. Rust said recently as the couple talked about their early years in Cape Girardeau.

"We didn't have much money, just a little in postal savings that we had put away. We decided we might have a better chance at surviving if we got back in home territory. Bell City was home to Eva and she was familiar with and liked Cape Girardeau, which was certainly closer to Arkansas than Detroit was," Mr. Rust said.

So, the young couple, along with a friend of Mr. Rust, Remmal (Bud) Martin, set out for Missouri with a very small savings, a truck and youthful exuberance.

Mr. Martin knew how to upholster furniture so they decided they might be able to make a living doing that.

They rented a small shop at 133 North Sprigg from F.F. Brown, and set about knocking on doors asking if anyone needed any upholstering done.

"We like the area," Mr. Rust said as he explained their business growth of 48 years here.

The Rusts are in the process of celebrating their 48th anniversary in Cape Girardeau.

Reflections on the past brought many things to light about Cape Girardeau in the '30s, '40s and on up to the present.

Mr. Rust and Mr. Martin stayed in the small building on Sprigg for two years, building their clientele from Cape Girardeau to the north, south, east and west of here. In 1935, they moved to 632 Broadway, and in 1938, bought a frame building to house their expanding business. By now, the Rusts had two sons, Harry, born in 1933 and Gary, born in 1935. Later in 1945, their last son, James, was born. Dr. H.V. Ashley delivered the boys and all total, it only cost Mr. Rust $60 for each. "Including the hospital bill," he remarked.

In 1936, the two men hired their first employee, a man named Paul Koch. They paid him $12 a week (and that was a 60-hour week, Mr. Rust said). "We explained to him that if we didn't have any money when it came time to pay him on Saturday, then he wouldn't get any money." However, according to Mr. Rust, "most of the time, we made enough for all of us to buy groceries."

In 1939, Mr. Martin was killed in an auto accident and Mr. Rust bought his share of the store from his widow. "Then it was just us, but we decided to keep the Martin name on the store because I didn't see any reason to change it. We built the business as Rust and Martin and I still don't see the need to change it," Mr. Rust said.

Mr. and Mrs. Rust spent many long hours at their store, buying and ordering materials and making draperies and slipcovers. Because Mr. Rust's mother came to live with them, Mrs. Rust felt she could work at the store and not neglect her children. "Grandma" was a second mother to the boys. "But I was always home when they got out of school. I think it's very important for parents to be with their children as much as possible and do things with them. They shouldn't ever just be left with someone and forgotten," Mrs. Rust remarked.

Today, with 10 busy, active grandchildren to keep track of, Mr. and Mrs. Rust find themselves at most school activities, and are still interested in what is going on at the schools. One of the grandsons, Stephen, and his wife Deshay, manage the store at Columbia. Other grandchildren are finding work at their grandparents' stores interesting also, but Mr. and Mrs. Rust, when asked if turning the work over to their sons and grandchildren and retiring might be in the near future, both gave a resounding NO reply. "I've seen too many people just sit down and give up when they retire. As long as we're able, we want to continue working," they said.

"But," as Mr. Rust said, "to get back to the business of remembering about the 48 years," the frame building they were in burned on Christmas Eve of 1950. The family had gone to Rector, Arkansas for Christmas and when they came home, they found rubble where their store had stood. They sought help from architect Fred Dormeyer who designed the present building that houses their store on Broadway. Charlie Hood built the building, Mr. Rust said, and they decided with the extra room they could now handle drapery and slipcover business. The new store was ready to open in 1951.

The Rusts have seen many changes in the upholstery business over the years, but probably the most noticeable is that in the past, they could always be certain that material they ordered would be of top quality. Now, they watch their shipments carefully for flaws and often send bolts of material back to the factories. Mr. Rust believes that a lot of federal government interference has forced many companies to cut corners, accounting for a lot of the problems.

He and Mrs. Rust are firm supporters of Free Enterprise which allows "people like us to have business," Mr. Rust said, adding "Free Enterprise is what made this country."

One thing the Rusts now enjoy is being able to get away when they want to, to attend seminars informing them of the latest advances concerning their businesses. They make buying trips to Dallas three or four times a year and travel to New York twice a year. "We like to stay up on things," Mr. Rust said. "But I wouldn't want to live in either of those places. They're fun to visit though. I think Cape has about all anyone would want in every area."

Both Mr. and Mrs. Rust work at the store six days a week, taking time out to enjoy community and social affairs. They are active members of Centenary United Methodist Church and Mr. Rust is a charter member of the Kiwanis Club with a perfect attendance record of 38 years. He served as state vice president for the Junior Chamber of Commerce and was active in the local organization also.

"Our 48 years here have been good ones," the couple remarked. "We have enjoyed the community, raised our boys and been able to serve our customers. And we have been happy. What more could anyone ask for?"

The phrase, "let's go home," can now be changed to, "we're home" for Wayne and Eva Rust.