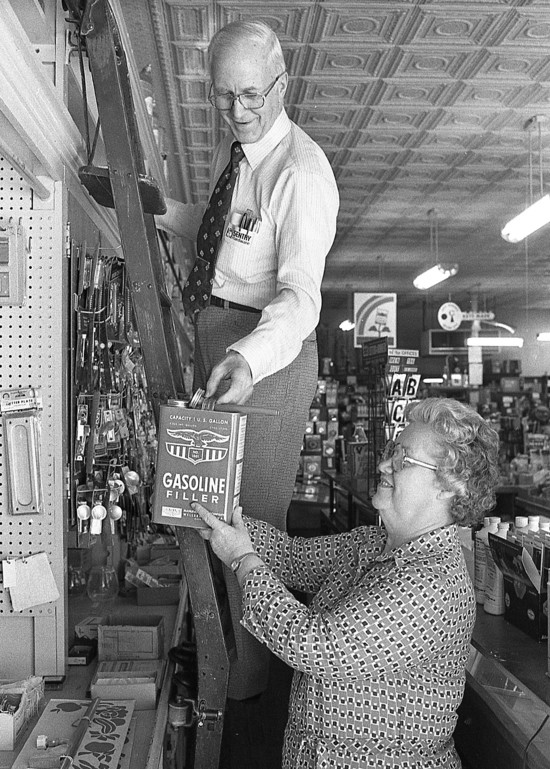 It was in the mid-1920s and Good Hope Street was a bustling place, especially on Saturday nights.

The streetcars clanged and young Wilton (Witt) Suedekum watched from the doorway of his father's hardware store as the first of the crowd began to emerge from the Orpheum Theater down the street. Witt began to straighten the shelves for the umpteenth time that day, and his father, William F. Suedekum, opened a new receipt book. The elder Mr. Suedekum had been in business on Good Hope Street since 1912 and he knew the crowd would be coming in for nails, glass storage batteries, 32-volt generators and numerous other household necessities of the day. It was payday and as sure as the sun came up in the mornings, men and women in and around Cape Girardeau shopped on Saturday nights.

They visited the confectioners store, the hardware store, the variety store and last, the grocery stores, just before heading home with their weekly needs. Most of the shoppers were blue-collar workers who didn't get off from their jobs until 6 p.m. After cleaning up, the entire family would come to town to either see a movie, get an ice cream cone or just to buy groceries. The women, wearing starched print dresses, more often than not, bought a card of buttons, up the street at Hirsch's while their husbands visited on the street corner or browsed through the hardware store for a new handle for a shovel or a sack of nails. There was always the brightly lit stores to greet the customers and plenty of merchandise for them to look at. Sometimes families admired a radio or an appliance for months before they saved enough to purchase it. That was a red-lettter day for the customer and the storekeeper.

To this day, Witt Suedekum says he still enjoys the people who come into the hardware store on Good Hope, his store now, since his father died in 1968. Actually, he noted recently, the store is a corporation, and belongs to him, his wife Flo, and their daughters, Mary Sue Green of Sikeston and Mrs. Kate Ackman of Cape Girardeau.

But it remains today what it began as a family business.

Although the Suedekums have kept up with the times in terms of stocking new merchandise needed by their customers, they have managed to maintain an old-fashioned comfort in their store. Clerks, and Mrs. and Mrs. Suedekum wait on customers, and two sliding ladders hooked to top shelves serve as reminders of the past. The ladders have also provided the five Suedekum grandchildren with a great deal of entertainment over the years, their grandparents say.

Today, Mr. and Mrs. Suedekum will be doing a great deal of reminiscing as they celebrate three very meaningful anniversaries at an open house. The celebration will be from 1 to 5 this afternoon in the Assembly Room at Trinity School. The Suedekums expect their family and many of their friends to stop by. Mrs. Suedekum remarked jokingly this week that she hopes a lot of people come by because she doesn't want to have to eat all that anniversary cake by herself.

The anniversaries being noted today include a 50-year anniversary for Mr. Suedekum in the hardware business, (the shiny Estwing Gold Hammer Award to prove it); the 69th year for the store on Good Hope and the couple's 45th wedding anniversary. They were married before breakfast April 12, 1936, in the old parsonage of Trinity Lutheran Church. Mrs. Suedekum recalled that the two of them had breakfast at the Marquette Hotel following the wedding.

Mr. and Mrs. Suedekum have continued to be active members of Trinity Church. Mrs. Suedekum is a member of the Ladies Aid and Mr. Suedekum was president of Trinity Bowling Association for many years and served as chairman of the envelope committee for 35 years. He has been president of the Trinity Men's Club two times and has served on numerous other committees over the years.

Both Witt and Flo are graduates of Central High School, classes of 1931 and 1932 respectively, and both attended grade schools here. They have watched Cape Girardeau grow through the years, and today, Mr. Suedekum says he is surprised to find the city with a large shopping mall. Cape Girardeau has moved from the small, one-owner businesses to the Town Plaza, and now to the West Park Mall. "I never thought I would see such a change in my lifetime," Mr. Suedekum commented. "We're the big city between St. Louis and Memphis."

Good Hope Street is not the bustling place it once was, and this is sad to the Suedekums. They recall when stores lined both sides of the street in the Good Hope shopping area and people bumped into each other as they passed on the sidewalks. Now, just the hardware store, Unnerstall's Rexall Drug Store, Lorberg's Appliance and the Farmers & Merchants Bank are all that is left of the original stores on the block.

Good Hope had no taverns until after prohibition and it was after World War II when the hitching posts were taken down from the area. Also, Mr. Suedekum stopped his trips to Paducah to stock up on harnesses. "After the war, people went to tractors," he said.

A lot of things changed after the war. The mechanical age caught on and freed the working man from his 12-14 hour, six-days a week routine. "Well, we don't stay open as late as we did years ago," Mr. Suedekum said, "but we still are open six day a week." For quite some time though, the store has stayed open until 11 p.m. on Saturdays for late customers. And, it has been a long time since Mr. Suedekum delivered red wagons and tricycles late on Christmas Eve to accommodate customers. But, he remembered when he did and the memories are good ones.

In the 1950s, coffee breaks became a routine on Good Hope, as they did in other parts of town, and the merchants gathered once or twice a day to discuss "important" things. Things like "who has a bad case of the black ear today?" Black ear, it seems, was just one of a multitude of pranks played on "friends" by the Good Hope crowd. A bit of dark salve would be rubbed on the receiver of the telephone at the back of the drugstore, (by whom, no one would ever know) and soon, the "victim" would be called to the phone by an anonymous caller. When he came back to the table for his coffee, a ring of the rank smelling, dark salve would be left imprinted on his ear. Thus, another case of black ear was discovered.

"We had some good times in the past all right, and still do," Mr. Suedekum said. "The years have been good to us here and we plan to continue as long as we are able."

Mr. and Mrs. Suedekum are certain that having the new Police and Fire Station buildings in the area, in addition to the new Trinity Lutheran Church being built up the street and the multi-purpose addition to St. Mary's Cathedral, all serve to make the area more attractive and needed in the community. However, Mr. Suedekum believes that an urban redevelopment program would be necessary to rebuild the Good Hope area. "No one person could do it. It will take a great deal of money," he commented.

The thing that really bothers Mr. Suedekum is that the country is now seeing the disappearance of the little stores, the family businesses like his.

"They are going the way of the old family doctor. They will soon be gone, I'm afraid," he said.

But Suedekum's Hardware on Good Hope has been there for 69 years and Witt Suedekum hopes to be standing in the doorway of that building for as long as he is able, with his wife beside him waiting on customers.