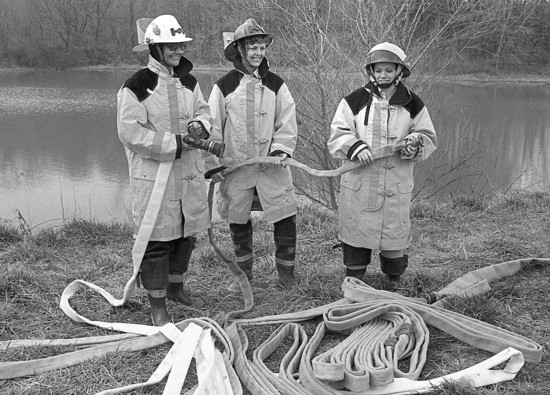 Three of the four women firefighters on the Whitewater Community Volunteer Fire Department are, from left, Evelyn Nussbaum, Ann Gerler and Mablene Bartels. Not pictured is Joyce Horky. 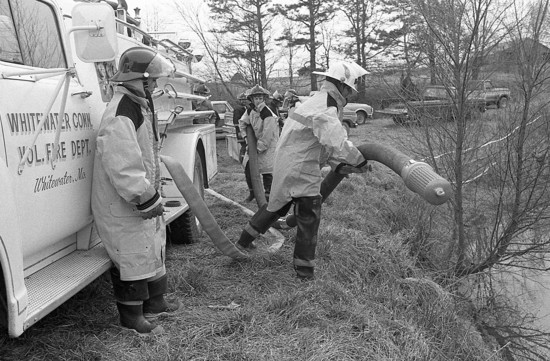 Lack of water at fire sites is about the most dangerous and the most frustrating thing that can happen, according to the women firefighters, but here, a pond was available, so they are getting ready to put suction in the pond to draft water. 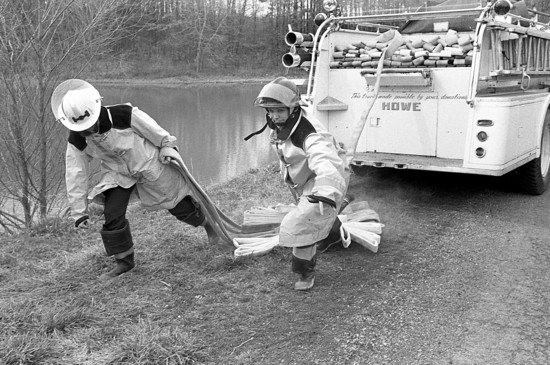 In a recent Sunday afternoon training session, the women take their turn at dragging the skid-load (hoses) off the truck. (Fred Lynch photos)

What kind of woman can get as excited over the purchase of fire resistant, bulky coats and high rubber boots as she can over a new linen suit and ankle strap shoes?

Possibly the same kind of woman who doesn't mind jamming a fireman's hat over a fresh hairdo and who will postpone supper to rush out and help save a neighbor's house or barn from burning.

There are four such women working with the Whitewater Community Volunteer Fire Department. Mablene Bartels, Evelyn Nussbaum, Ann Gerler and Joyce Horky untangle hoses, practice with air packs and train side by side with their husbands and fellow firefighters. When a call comes that the fire department is needed, the four are usually among the first to answer.

Their reasons for joining the fire department are much the same, mainly because they were needed, but the fact that it enables them to be around their husbands more was no small factor.

Being a member of a volunteer fire department takes a great deal of time according to the women, and they, much like fishing or golf "widows," found they had to seek an alternative to the situation.

"We just got tired of seeing our men go off every Sunday afternoon without us, so we decided to go with them. Now we take the kids and we all make a day of it," they said.

It was a fact that the fire department needed more members (and still do according to their latest newsletter) and it was also a fact that since all four women were raised in the country, hard work was no stranger to any of them.

"Having the women on the department is fine," Fire Chief Truman Nussbaum said recently. "I expect them to do anything the men can do, and so far, they have. They listen and they train hard."

Elmer Bartels Jr., assistant fire chief, commented that "a lot of the time, the women are available at home when the men are at work and it helps out."

Many times when a fire call is received by one of the two telephone volunteers, Marie Blumenberg or Carolyn Pope, whole families are on hand at the fire by the time the fire truck gets there. The women and some of the older children provide a good backup system for the fire department, Bartels said.

The Whitewater Community Volunteer Fire Department is only three years old, but it has made an impact on the small rural community.

"It makes us all feel safer to know that if we have a fire break out around here, at least we have a fighting chance," Mrs. Nussbaum said. Before the first fire truck was obtained, the Whitewater community had to call on the Delta volunteers, and it took awhile for help to arrive.

Even though dances, bake sales, raffles, donations and suppers have made possible the purchase of trucks, hoses, equipment such as the hats, coats and boots, the fire department is progressing slower than the members would like.

David Blumenberg, president of the fire department, in his latest report, noted that over $1,000 is still owed on one of the trucks, and a fire station needs to be built before another winter so that both trucks and equipment will be kept warm and ready to use. This winter, one of the trucks had to be drained and left idle because there was room for only one truck in the borrowed building they use to park them.

A new tank truck is vitally needed according to the president and members. Lack of water at fire locations is "one of the most frustrating things that happens when you try to save a building or contain a fire." Mrs. Bartels said. With the purchase of a tank truck it is expected that the water supply could be increased by 1,500 to 2,000 gallons.

In addition to membership dues and donations, a large amount of support comes from the Ladies Auxiliary to the fire department. Blumenberg praised these women for the "hard work that they do and for providing the department with much needed equipment. Recently, the auxiliary purchased 200 feet of two and a half inch hose for $1,150.

All of the auxilary, including the four women firefighters, have at one time or another been touched by a damaging fire. Mablene Bartels' brother lost his house to fire and the Gerlers' best friends' house burned.

"The hardest part of being a member of the fire department is standing there and seeing someone's house burn. Sometimes we can't help them. Sometimes there isn't enough water available to save it or we didn't get called in time," Evelyn Nussbaum said. "You stand there and know they are losing everything they worked for all their lives and it's sad. We (women) don't get embarrassed about crying over things like this. Even the men cry sometimes.

The sadness has to be put in its proper perspective though, and the group learns by each fire call that they have to work a little harder at the next training session. Usually they can be at a fire in their area in 10 to 15 minutes and at the farthest location in about 19 minutes. The members all agree that if people would call the minute they are aware of a fire, losses would be less. "Many times they try to put out the fire themselves before calling us," Mrs. Nussbaum said. "If they would call us and then work on the fire until we get there it would be better. We would much rather make the run and have to turn around and come back if the fire was already out."

Sometimes the women go about their work at home for a number of days without stopping to fight fires, but other days, they may be interrupted three or four times.

"Usually we get a call at supper time," Mrs. Gerler noted. "And it is not unusual for the men to get called from combining beans two or three times before they are finished."

"We don't mind, though, Mrs. Bartels said. "We train for this and we've committed ourselves to be members of the fire department."

Mrs. Gerler added, "We don't enjoy having to go to fires, but I think we all enjoy the training sessions and the fellowship we share. We meet a lot of people from other departments when we go to the University of Missouri training courses and when we attend CPR and First Aid classes. Actually, the fire department has become our social life."

The group joins with Chaffee, Delta, Perkins and Millersville for training sessions and many times, each department depends on the other for help. "We all face the same problems. We need more members, more money and more training," Mrs. Nussbaum said.

As firefighters, the women don't mind lugging around heavy hoses, slipping and sliding in the mud or going home with black soot smeared across their faces, but as homemakers they have the same interests as other women.

They prefer to be able to stay in their kitchens until the dishes are done and if no calls come, they sit down after dinner to sew, as many of them do, or to read. They take part in PTO activities at their children's schools and some like to arrange flowers or work in crafts.

But when the fire calls do come, the women don't mind dropping whatever it is they are doing and answer those calls, "because it might be us needing help the next call," they all agree.