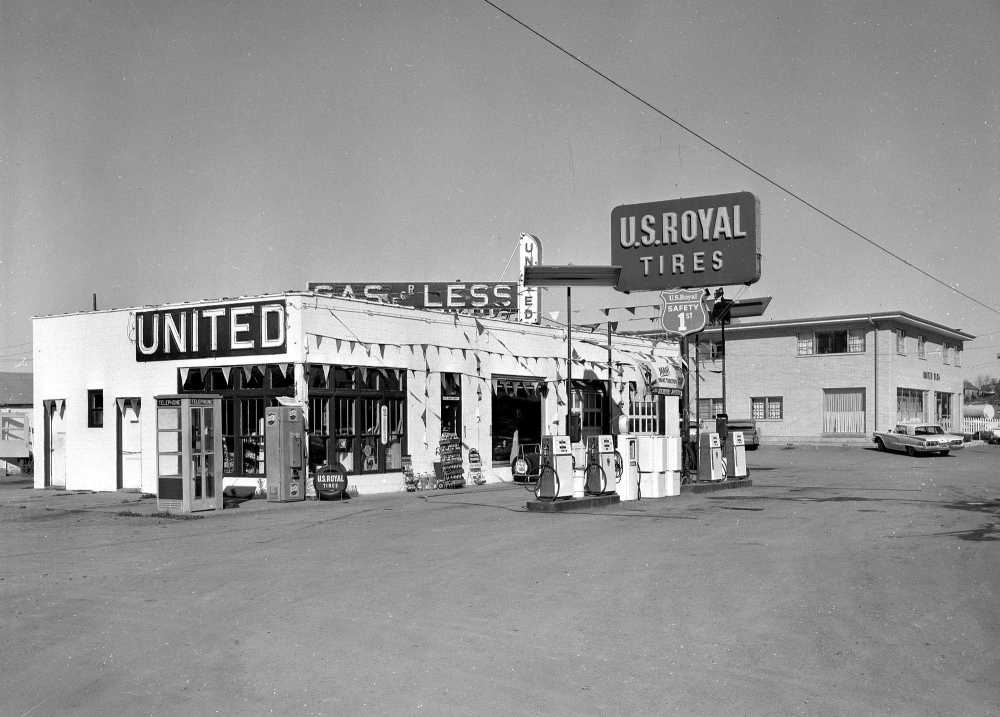 G.D. Fronabarger made this picture of the United Oil Co. service station at Independence and Kingshighway in the early 1960s. The United Building is at the right. The site is now the Crossroads Shopping Center.

United Oil Company was established by LaRoy R. Roper, Sr. in 1947. For many years, Mr. Roper and his wife, Leone Roper, operated the business. They were joined in 1964 by LaRoy R. Roper, Jr., and Fred R. Wilferth, who have continued in the management of the company. Since its beginning, the United Oil Company has dealt in wholesale and retail gasoline, wholesale motor oil and numerous related automotive lines. The success of United Oil and related businesses has come about largely due to the quality products, competitive prices and dependable service that has become a trademark of the companies. This trademark is possible, however, only because of the dedication and effort put forth by the employees and management. 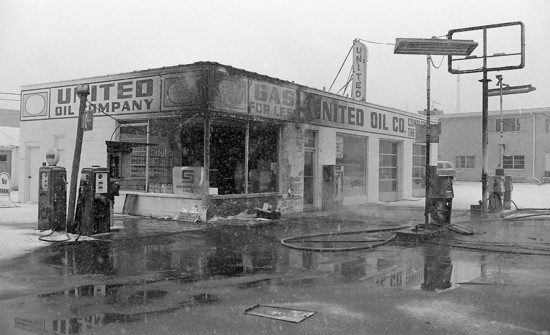 The United Oil Co. service station, 101 North Kingshighway, has a charred exterior as the result of fire Monday. The station, however is in operation and the pump destroyed when a van pulled away without the gas hose being removed from the tank will likely be back in operation Wednesday. Company spokesmen say they're lucky it wasn't worse.

Offers of assistance pour in

Adversity tends to bring out the best in people.

Folks at United Oil Co., 101 North Kingshighway, would subscribe to that old maxim as many persons have expressed their desire to help the company recover from a Monday fire.

"We have had scores of people come by and offer to help," L.R. "Micky" Roper said this morning. That response has been heartwarming.

One of the most touching expressions of sympathy, according to Mr. Roper, was from a family that lost its home this past weekend to fire. Mr. and Mrs. Ronnie Schrum, who saw their home and possessions go up in smoke Saturday, stopped by and offered to help.

Today, United's service station at Independence and Kingshighway is back in operation in a limited capacity. Plywood covers the holes where new windows will be installed later this week.

"We lost the service of two pumps," Mr. Roper said, "but we hope to have our 'regular' gas pump up and in service on Wednesday."

The fire started when a van operated by Radley Jauch pulled away from a gas pump, unaware that the hose had not been removed from the gas tank. The pump was pulled over and gas spewed over the area. Sparks from the wiring of the pump mechanism apparently ignited the gas.