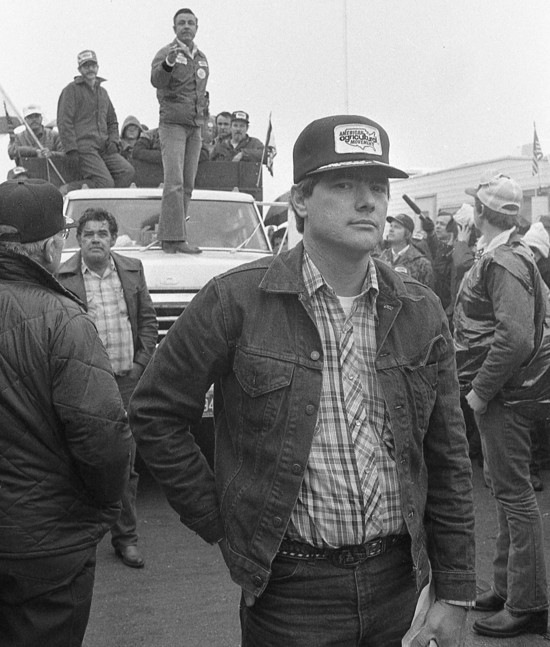 Puxico farmer Wayne Cryts (foreground) just before he confronted marshals Monday morning, Feb. 16, 1981, with intention of taking 30,000 bushels of soybeans Cryts has stored at a bankrupt New Madrid elevator. Standing on the hood of a truck is Alvin Jenkins of the Colorado American Agriculture Movement. 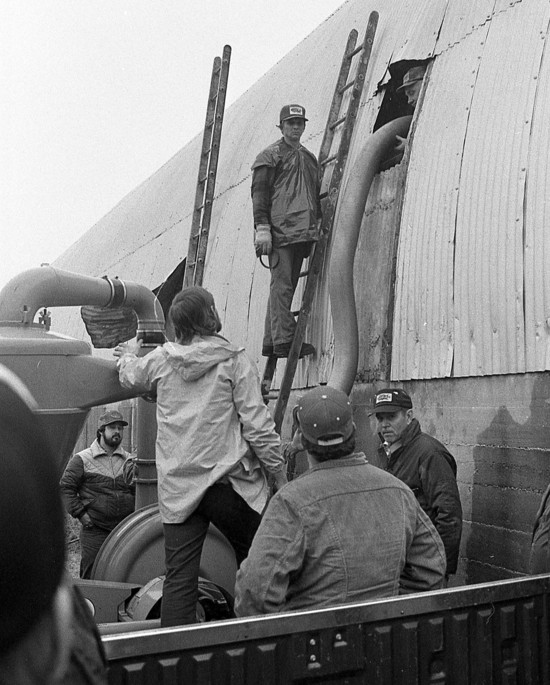 Farmers prepare to begin loading soybeans at one of three grain bins at the Ristine elevator. Farmers pried metal sheets off the side of the bin to get at the soybeans. The farmers said they would repair any damage caused to the bins. (Tim Landis photos)

NEW MADRID -- A Puxico farmer today began taking 30,000 bushels of soybeans he claims are his from the Ristine elevator near here.

Wayne Cryts and about a half dozen other farmers pried open a seam in a sheet metal grain bin and used a vacuum device to suck the grain into a truck.

About 600 farmers, many from the area but also from a number of other states, were on hand at the elevator this morning, as were about six U.S. marshals.

There was no violence and the farmers taking the grain were not obstructed. No weapons were observed.

The development this morning is the latest in the continuing controversy over the ownership of grain stored in the Ristine elevator and a number of others whose owner had declared bankruptcy.

When Cryts presented himself at the elevator this morning, a federal marshal read a federal bankruptcy court order stating that the beans were under the protection of that court.

Cryts in turn read a statement to the effect that the beans belonged to him because he held warehouse receipts and the state of Missouri had certified the elevator.

Cryts said he intended to take an equal amount of beans from each of three grain bins at the elevator.

Other farmers who say they have grain in the elevator were not removing any grain they contend belongs to them.

Farmers had come from as far away as Colorado, Nebraska and Georgia to lend moral support to Cryts and the other Southeast Missouri farmers.

The atmosphere was not hostile and in fact there was some good-natured bantering between the farmers and the marshals, who were the only law enforcement officers on the premises.

At the scene were about 100 grain trucks and American Flags were much in evidence.

The group of farmers cheered when Cryts walked up to Howard Safir of the U.S. marshal's office in Washington.

"We are here today to carry out our duty and enforce the court order," said Safir, holding a four-day-old order from the 8th U.S. Circuit Court of Appeals in St. Louis to maintain possession of the soybeans.

"I have decided that the court order is without the weight of law," said Cryts, a stocky, sixth-generation farmer wearing an American Agriculture Movement hat. "And it doesn't have jurisdiction over me."

As Cryts strode back to his truck, Safir was asked what he would do.

"We don't want to see innocent people hurt," he responded. "We're going to let them come in if they force the issue."

With that, the lead truck surged forward and entered the compound. Farmers used crowbars to pry the corrugated metal from the side of the first storage bin and began to remove the grain.

Some $5 million to $8 million worth of grain has been tied up in five southern Missouri elevators for the past eight months since the elevators' owners, the James Brothers of Corning, Ark., filed for bankruptcy.

A district judge in Arkansas authorized a court-appointed trustee to begin selling the grain to pay off the James Brothers' debts, but that order was delayed by the appeals court. The appeals court has since been overseeing negotiations in the dispute.

Farmers are upset over a proposed settlement which would pay them $7.87 a bushel, minus 9 ½ cents to pay for attorneys fees and storage costs. The farmers say that means they are turning over their profits to lawyers.

"I've worked too hard for what I've got," Cryts, of Puxico, Mo., said. "It's going to destroy our farming operation. At least if they're going to destroy me, well by God at least I'm gonna struggle before they do it."

Farmers liken the situation to a city worker who leaves his car in a parking garage, but returns to find the garage has gone bankrupt. The car owner would not be allowed to recover the car because it must be sold to pay off the garage's debts.

"All I did was rent a storage space for these beans," Cryts said. "They're still charging me for storage."

Cryts says he needs to sell the stored grain, for which he has warehouse receipts, in order to begin planting this spring. He also said he would lose his farm unless he can sell the grain because he can't afford to refinance outstanding loans at current interest rates.

About 200 farmers from Missouri, Kansas, Nebraska, Oklahoma, Colorado, Texas and other states attended weekend rallies in support of Cryts. Cryts said the farmers are concerned the court's action sets a precedent for any farmer who stores grain in a private elevator.

The farmers had understood that negotiations were taking place in Washington today between USDA officials and a representative of the American Agriculture Movement.

However, Josh Bill, the administrative assistant for U.S. Rep. Bill Emerson, said today that he had been promised to be allowed to sit in on any discussion and had not been notified of any talks today.

A meeting was held Friday between Emerson and the USDA, at which the federal agency refused to accept the plan advanced by the congressman as a solution to the impasse.

Emerson had suggested that the government buy the farmers' grain at the current market price which would free the farmers from whatever litigation occurs.

NEW MADRID -- What, if anything, the federal government intends to do in view of Puxico farmer Wayne Cryts' removal of soybeans from a bankrupt elevator here remained uncertain today.

But one thing was certain: with the support of about 600 farmers, Cryts is winning the latest round in his continuing fight to acquire what he claims is his grain stored at the Ristine elevator.

A crowd estimated at nearly 1,000 gathered in the mud and drizzle Monday morning as Cryts defied federal marshals and began loading 30,000 bushels of soybeans he has stored at the elevator.

U.S. Attorney Robert Kingsland in St. Louis said today Cryts "is in contempt of the bankruptcy court and has violated several criminal statues in his seizure of the grain, including obstructing a marshal in the performance of his duties. These are felony and misdemeanor violations," he said.

Kingsland declined to say what action would be taken against Cryts, but said federal authorities are keeping close watch on the grain.

"Other elevators have been warned by the trustee in bankruptcy," he said. "My information is that as of yesterday, they didn't have any potential buyer."

Kingsland said his prime concern was to prevent bloodshed during Monday's confrontation and that farmers cooperated nicely in that regard.

Approximately 400 farmers remained at the elevator today helping Cryts load his grain. The process is expected to take most of the day and is being closely watched by federal marshals and FBI agents.

While there was considerable cheering and flag waving, when Cryts confronted U.S. marshals Monday morning, knowing better than anyone that his fight has only begun.

Shortly before Cryts left Sikeston Monday for his confrontation with federal marshals, he told The Missourian he is well aware his actions may carry serious consequences.

"It's the principle of the thing," Cryts said. "I've got a lot to lose. But it (the federal bankruptcy order) was not a just settlement."

Commenting on the hundreds of farmers who came from all over the country to back him, Cryts said, "Most of these people don't even know who Wayne Cryts is. They know it's the principle of the thing."

"If our warehouse receipts are not honored," Cryts remarked, "then we're just gambling with our grain."

Cryts said he was forced to the wall by a federal court's ruling last fall that his soybeans could be sold by the James Brothers Co. of Corning, Ark., to meet debts in their bankruptcy proceedings.

Cryts estimated his beans are worth some $250,000. Without that money, he said, he will not be able to plant a crop this spring. And at current interest rates, he added, he can't afford to refinance.

In a sense, Cryts observed, he had nothing to lose by going after the beans. He agreed he could very well go to jail by defying a court order. "I'll probably spend the next 20 years of my life in court," he said.

However, without the money from the beans, he said, his sixth-generation family farm could very easily go broke.

NEW MADRID, Mo. -- As Wayne Cryts walks across the grounds of the now-defunct Ristine Co. today a wave of emotions comes flooding back to him.

His mind is filled with memories of an event that happened here 25 years ago -- an event that would come to define his life and shake Southeast Missouri to its core.

"This is the first time I've been here in 25 years," Cryts says as he walks over the concrete pads, now cracked and choked with weeds, where farmers' trucks from all around the area used to bring their grain for storage. "It still brings back all the emotions I felt back then."