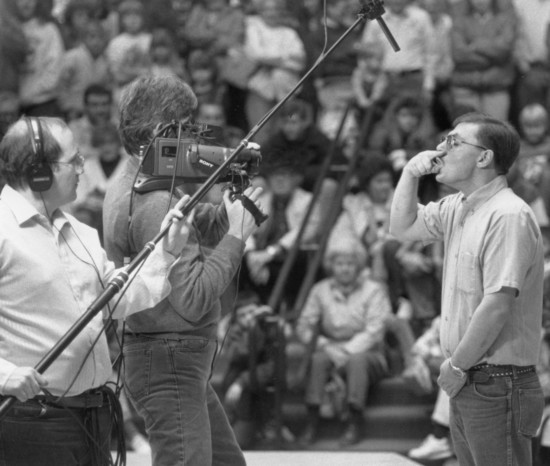 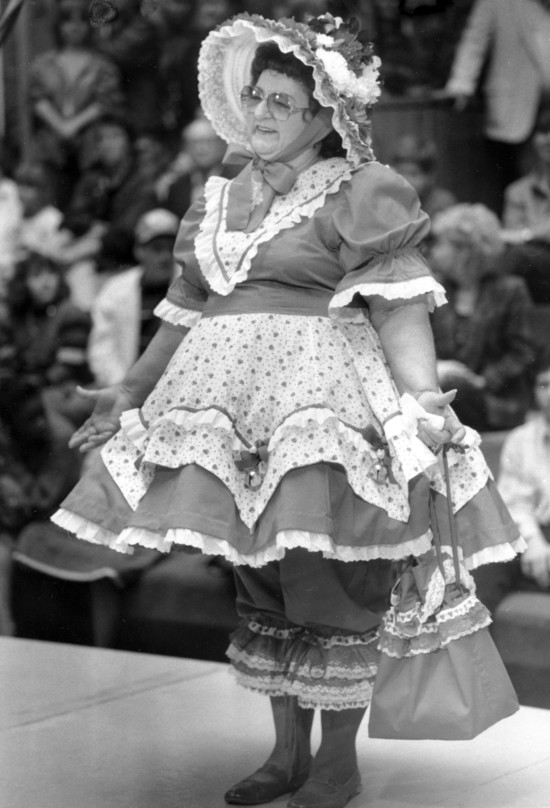 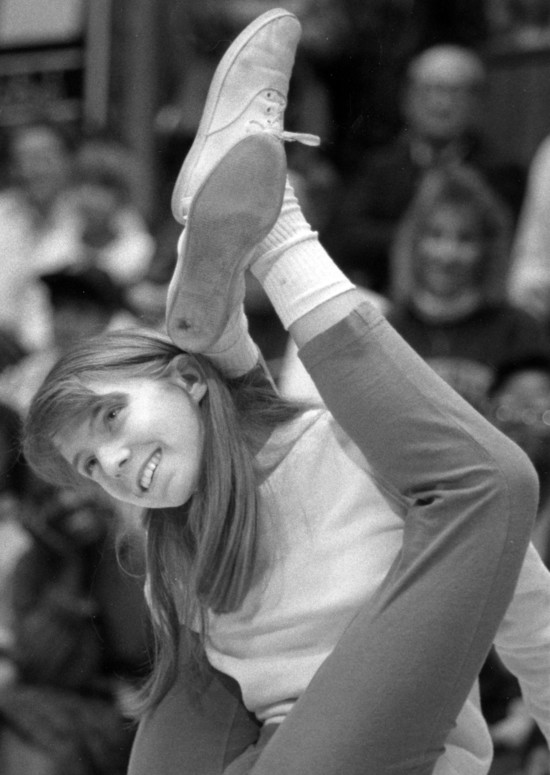 Beverley Kester of Jackson demonstrates her ability to put her legs behind her head. More than 60 people showed up for a chance at being featured on the show. (Fred Lynch photos)

But for the taping of the television show "America's Funniest People," Charlie performed for the world.

"I got real nervous, but then everybody started laughing," he said after his turn on the stage was over. "My knees were still shaking though."

He said he can do other impressions, but Roger and Pee Wee are his favorites.

Charlie, who traveled from Poplar Bluff with his mother, Gale, was one of more than 60 people who showed up for a chance at being featured on the show.

The ABC show, which airs locally on Sunday nights, sent a crew to Cape Girardeau to search for local talent.

Producers from the show were in Carbondale, Ill., on Friday and Paducah, Ky., Saturday. Today, they will again tape in Carbondale.

The taping here started at about 12:30 p.m. Sunday in the center court at West Park Mall. A large crowd watched the local performers during the approximately four hours of taping.

Joyce Goldstein, a segment producer for the show, said small markets like Cape Girardeau are where the show finds some of its best talent.

"Markets like these are really our bread and butter," Goldstein said. "The people really come out and are excited about the show."

She said it's impossible to determine exactly how many of those who performed Sunday will actually make it on to the nationally televised show.

"If we see 20 good people, then there will be 20 of them on the show. It just really depends on what we see," she said.

Tapes are sent back to the executive producers of the show, who decide which acts make it and which don't, she said. The lucky ones will probably be on the show within two to three weeks, she added.

"We're really looking for something different. A lot of people will see something on the show and come out and do something just like it. But what we want is something creative and original, not something we've seen before," she said.

Those who are selected for the show will have a chance to compete for $10,000 in prize money, said Goldstein. These people will be flown to Los Angeles to perform in front of a studio audience, which judges the contest.

But even if participants don't make it to the contest, they have a chance to be featured in a 10- or 30-second spot on the show.

"People in these segments can get banked for a later date and may show up in one of the many segments we have on the show," Goldstein said.

Barry McArdle of Cape Girardeau was the first to brave the stage Sunday. He performed his impression of Donald Duck.

McArdle, 27, said he doesn't usually do the impression in public. But often, he'll use it to make kids laugh.

"I just love kids, and they seem to really like it," he said. The Donald Duck sneeze is usually what gets them laughing, he said. "I ask them if they've ever had a cold, and then show them how Donald sneezes.

Michael Smith of Fruitland decided to do a stand-up comedy routine for the show. It was a routine the 13-year-old had performed once before at summer camp.

"My parents kept telling me it was good, and they were the ones who really encouraged me to do it today," Smith said.

Asked if he was nervous, Smith said that once the crowd started laughing, it got a lot easier.

"If you're watching a dead audience, it really doesn't help," he said.

Beverley Kester's act was different than most, but seemed to please the crowd just as much. Kester, who said she was a competitive gymnast for seven years, sat on the stage and showed the crowd how she is able to put her legs behind her head.

Kester, 19, of Jackson, said that although it looked difficult, it wasn't hard to do.

"I just got out there and did it," she said.