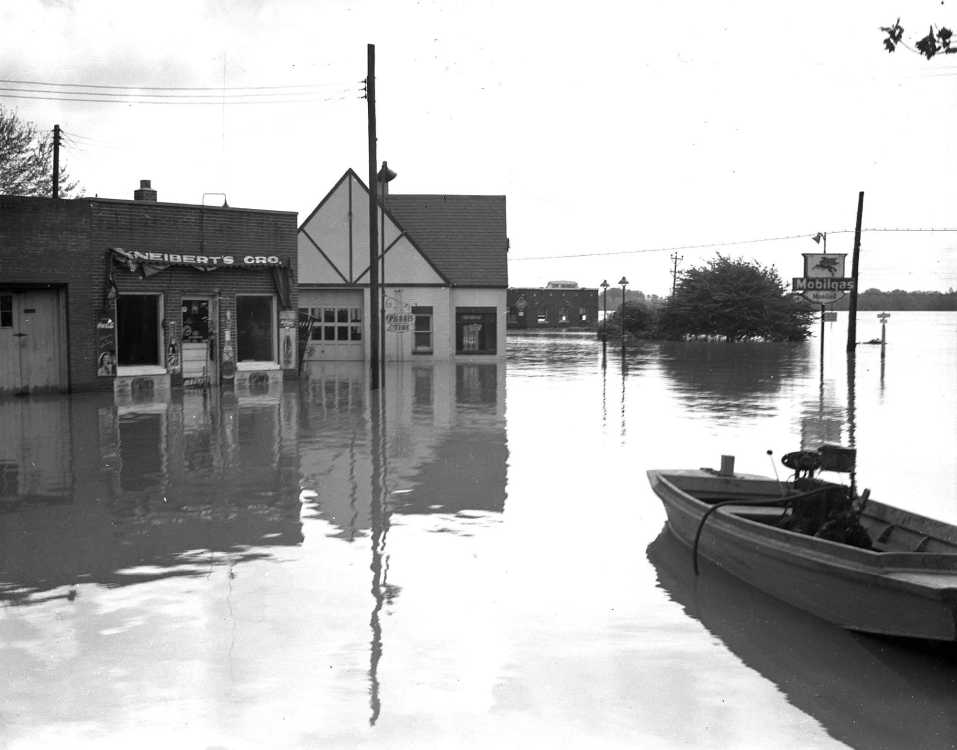 The Kelso Oil Co. super-service station, Main and Merriwether streets, is surrounded by Mississippi River floodwaters in 1944. Built in 1935, the brick building was set diagonally on the lot and replaced a smaller unit. The Frisco railroad passenger depot is in the background. (G.D. Fronabarger photo)

The service station can be seen in this aerial photo of Old St. Vincent's Church.

After reaching a new crest of 40.8 feet, recorded Saturday, May 6, 1944, the Mississippi River was falling at Cape Girardeau at a pace which, barring an additional rise, should move much of the flood water from the inundated areas here in a few days.

The new crest, brought about by failure of all the normal flow of the flood waters to escape through the confined channel at Thebes, Ill., plus the surge given to the river by water from inside the McClure, Ill., basin, was reached at 6 p.m. Saturday and held until shortly after midnight.

U.S. Engineers expressed belief the river would show a gradual return to a near normal stage, adding that there is not sufficient water in the upper Missouri River as the result of recent rains to have any great effect on this section.

The receding river enabled hundreds fighting the flood in this area to get a breather from their long vigil. Workmen protecting the power plant and cement plant were able to feel satisfied with the flood fortifications erected, and half of the Illinois state militiamen and federal troops based at Harris Field to fight the flood were released today, the militiamen returning to their homes and the federal troops returning to their bases at George Field, Lawrenceville, Ill., and Camp Ellis, near Peoria, Ill., the remainder staying here until the flood on both sides of the Illinois dike has been equalized. The evacuating troops--about 1300 were stationed here--left by way of Cairo, Ill.

The surge coming to Cape Girardeau Saturday night, giving the city 5/100ths of an inch more water than the previous crest of 40.75 feet, recorded last Monday, was created, Engineers explained, by the pressure of water flowing out of the McClure basin.

The river levee was opened again Saturday afternoon. This time it was not dynamited, but bulldozers opened it at a point about a mile north of the first gap, which is virtually at the extreme lower end of the 57,000-acre basin. Last year a 7-foot head developed on the inside of the basin at the lower end, meaning the water on the inside was seven feet higher than the level of the river outside, before the dike was breached. The surge of water from the opening retarded the outside current somewhat and gave Cape Girardeau its record stage of 42.4 feet.

For the first time in a week, some traffic was going over Highway 61 between the Highway 74 intersection and the Little River Diversion Channel where backwater covered the area.

With the water receding at a fairly sharp clip, Frisco officials are making plans to resume train service here. Inspection crews are already looking over the line near Ste. Genevieve where much of it was under water. A fall of around two more feet here will enable locomotives to get through along Water street without water getting into the fire boxes.