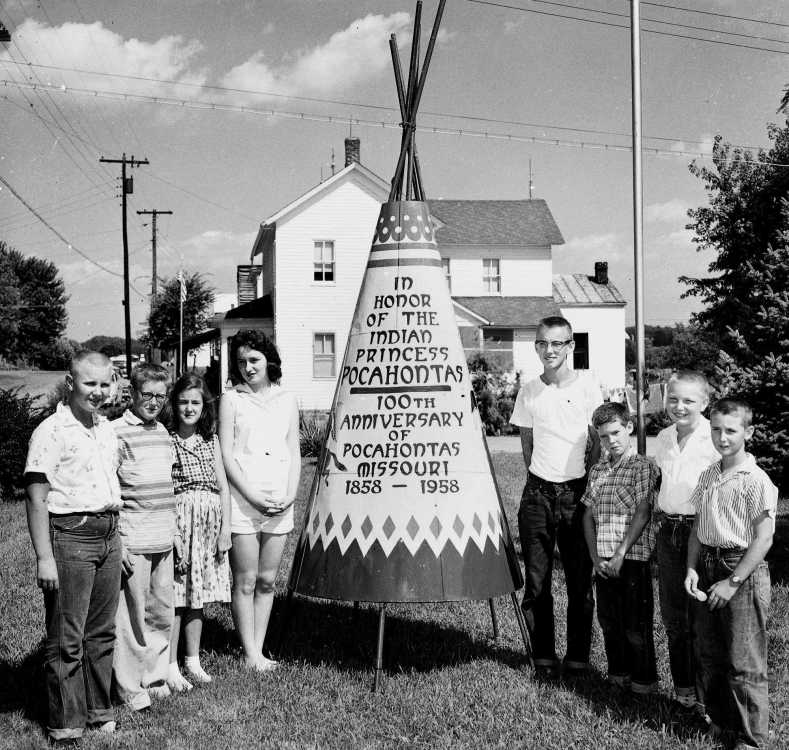 This Indian tepee has been erected by the 4-H Club at Pocahontas in tribute to the Indian princess for whom the town was named when it was founded 100 years ago. It will be the central point of the centennial celebration Sunday. Shown at the tepee are several 4-H Club members, from the left, Leonard Swan, Bruce Markworth, Donna Markworth, Vida Loberg, Herbert Rauh Jr., Daniel Markworth, Norman Swan, Nelson Swan. (G.D. Fronabarger photo)

POCAHONTAS--Approximately 400 persons gathered in the town square here Sunday evening to celebrate the 100th birthday of Pocahontas. It was a homecoming for many of the visiting friends, and a gala occasion for the town's citizens. A special centennial program featured a history of the town by G.F. Markworth, who was master of ceremonies.

The centennial tepee, special project of the Pocahontas 4-H Club, was unveiled by Alfred Markworth, and dedicated by Vida Loberg, both 4-H members. The tepee commemorates the 100th birthday of the town and Princess Pocahontas for whom it was named a century ago. It stands in Memorial Park in the center of town and will remain as a permanent memorial.

A speaker on the program was the Rev. G. Wittke of Herron, Mich., former pastor of St. John Lutheran Church in Pocahontas. Mayor Alfred Koeberl welcomed out of town visitors and crowned the two young girls who were selected as Princess Pocahontas (Marilyn Rastl) and Queen of the Centennial (Jean Kienninger). Selection was made by placing names of all girls in town under 12 years in the princess box, and names of all girls over 12 years in the Queen container, and then drawing a name from each box.

Music on the program featured vocal solos by Donna Markworth, a ukelele and vocal solo by Leonard Fiedler, and recorded square dance music and square dancing.

Concession stands were operated by 4-H members and their sponsors, and the club also had pony rides for children, the ponies being donated for the occasion by Jim Haas of near Pocahontas. 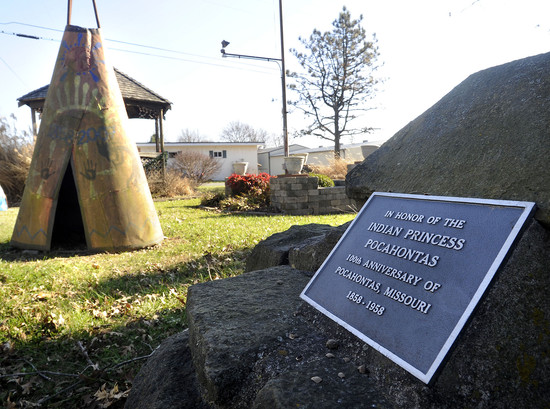