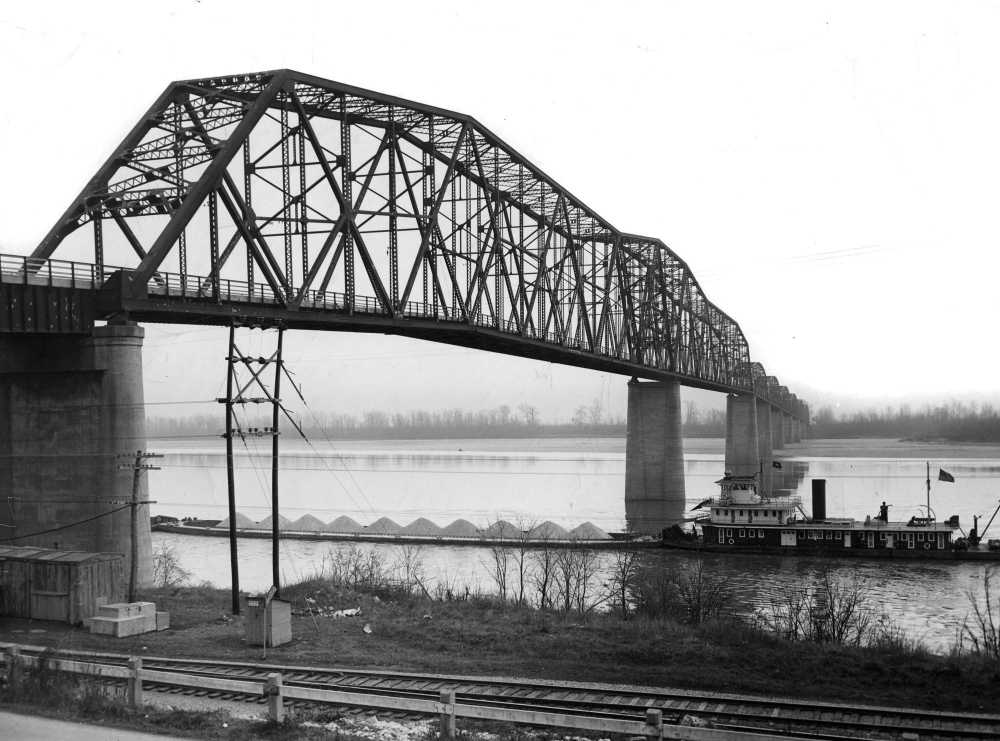 The original Mississippi River bridge at Cape Girardeau served from 1928 to 2003.

The Cape Girardeau Chamber of Commerce announced plans for the new bridge on Aug. 19, 1926. W.R. Compton Co. of St. Louis financed the project with the condition that the chamber would sell a total of $300,000 of bridge stock. On Sept. 6, 1926, the five-day fund drive to sell the required stock began, and by Sept. 10, a total of $388,900 in shares were sold, more than the required amount.

Joyfully celebrating the successful conclusion of a whirlwind campaign to guarantee the construction of the traffic bridge over the Mississippi river here, Cape Girardeans--men, women and children--Friday night joined in the noisiest and most spontaneous outburst of enthusiasm seen here since the days of the World War.

It is estimated that at least 10,000 persons took part in the merrymaking at Fairground Park in the concluding feature of the evening, but there were many more than this number who lined the streets along which the parade passed.

Forming on Pacific street, near Central High School, the parade, which consisted in the main of two fire trucks, an old 1913 model Ford as the car of honor, and hundreds of automobiles, passed over the principal business streets of the city mid a din of cheers, the screeching of automobile horns, the roars of motors and the ear-splitting noises from thousands of horns in the hands of children and adults.

Two bands, the municipal and high school organizations, attempted to add melody to the celebration, but their music was drowned out at times by blasts from the tin horns and the clatter and rattle of other noise-makers.

The parade was nearly a mile in length and it was formed in close order, so close at times that progress was impeded. But it was an orderly, good-natured and happy crowd and there wasn't an accident of a serious nature to mar the festivities.

The Cape Girardeau band, the newest city fire truck and the "car of honor," the latter piloted by President Fred A. Groves of the Chamber of Commerce, led the parade to Fairground Park.

Here the special bridge committee dismounted from their vehicle and took their places on the platform in front of the grandstand. The crowd jammed into the grandstand, thousands of others lined the hills overlooking, while the streets in the immediate vicinity were filled.

James A. Kinder presided at the ceremony and armed with a huge megaphone he presented each member of the bridge committee in person.

Then he presented Dan Weigle, the campaign director, as "King of Success;" tendered Charles L. Harrison a "large" loving cup in token of his excellent work; gave President Groves a two-feet-wide medal for heading the organization in the campaign; and to E.C. Hackett, the secretary, went an oil can from which to "grease the works."

It was all in fun and the huge crowd roared its approval as the various presentations were made.

Then closing the celebration a huge bonfire was started in the center of the enclosure and the chief of the relics that went into the flames was an old-fashioned horse-drawn hearse on which was painted a sign "Old Man Failure Died Today."

While the bonfire was at its height, someone in the enclosure started a straw hat shower that would have done justice to recent ones staged in St. Louis when the Cardinals won an important game, and before it was over many a straw hat that had served faithfully through the summer was in ashes.

Outside the short exercises at the park, there was no set program and the merrymaking was spontaneous and original.

The various teams rode in automobiles with the number of their group displayed, but hundreds walked the entire distance around the loop.

Advance notice of the celebration attracted many from outside towns, there being hundreds from the district watching the parade.

Read history of the bridge in this previous blog:

Here is a photo showing the site of the bridge before its construction:

Here are photos of the bridge construction in 1927:

Here is more history of the bridge with a photo of the dedication pageant: