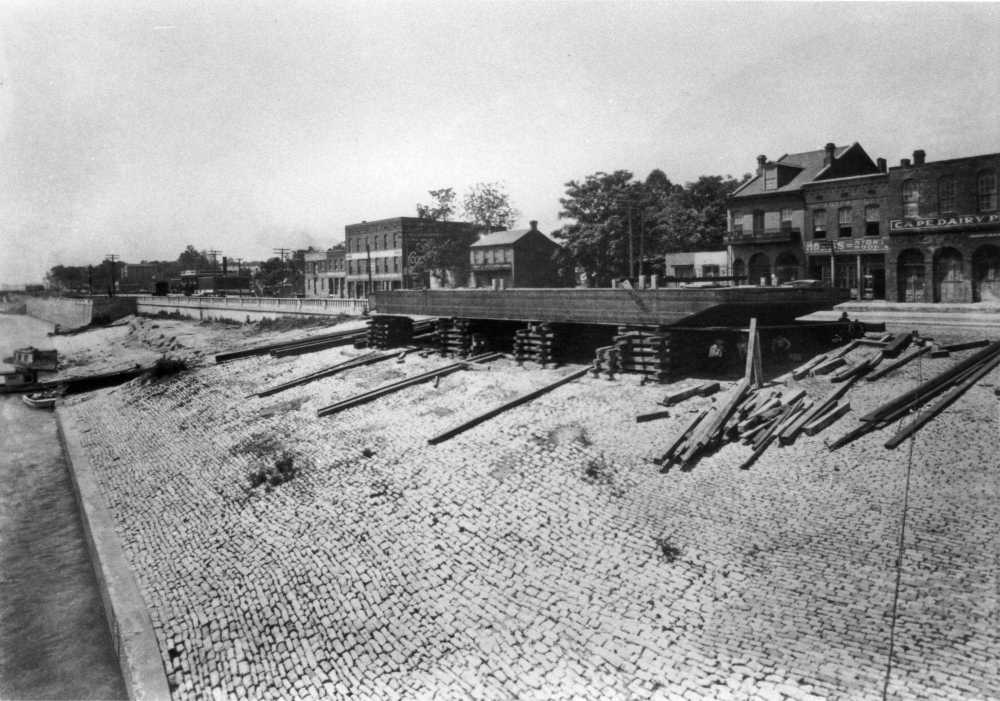 Peter Deimund and his son, Linder, began Cape Girardeau Sand Co. in 1919. They bought a barge from Kansas City to use in the operation, but because of World War I restrictions, they couldn't acquire a boat. Instead, they turned the Cape Girardeau wharf into a dry dock and built their own, the Myrtle. The two built a second boat in 1923, shown here, at the foot of Themis Street. (Katherine Cochran photo)

Sliding smoothly off her supports and settling into the water with a disappointingly faint splash, the new sand boat constructed by the Cape Sand Company at a cost of nearly $15,000 was launched in the Mississippi river at the foot of Themis street at 4:55 p.m. Friday.

Only a few spectators were present to witness the ceremonies of launching, even though it is an uncommon sight in Cape Girardeau. Only a few workmen, and Pete and Linder Deimund of the sand company, were there when the boat gallantly dipped into the water, settled for a moment and then came up buoyantly. Today the boat was riding at ease at the wharf, with a perfect balance.

Some difficulty in launching the vessel was expected due to the low stage of the water, but this was easily overcome. The boat, built on the wharf, 30 feet from the water, was placed on 12 giant timbers, on which it was to take its glide to the water. Twelve other large pieces of timber were placed nearer the water, some protruding over the stone wharf to take care of a sudden drop in the bank. Ropes were tied securely to the boat and a number of men, with machines to hold the boat, were in readiness to allow the slack as she moved down the bank.

There was a slight rubbing and screeching as the boat was cut loose and it started its slow journey to the water. Ropes tightened and the boat moved leisurely down the bank, onto the ones extending into the water, and as the edge of the boat struck the water, the ropes were cut loose, and she got her baptism.

The sand boat, said to be the largest on the river south of St. Louis, will have a capacity of 100 yards of sand per hour if run continuously. Operating at this speed it could furnish sand for more than 10 railroad cars each day.

Two barges, to handle the sand from this boat and a smaller boat owned by the company, are to be provided and the output of the local concern will be more than doubled. The larger and newer boat will be maintained here at all times, while the other will complete a contract for 6,000 yards of sand at Grand Tower, Ill.

Christening of the boat will be observed within the next two weeks, when a name already selected, but not announced, will be formally given the new vessel.

The hull of the boat is 20 feet wide and 80 feet long, and 3½ feet in depth. It is equipped with new machinery, including engine, boiler, sand pump and other accessories. The stern wheel is 11 feet and 6 inches wide and dips 20 inches in the water. Practically all the carpenter work has been completed, and after a coat of white paint and the installation of the boiler the craft will be ready for service.

The Deimunds said today that the sand business is better now than ever before, both in Cape Girardeau and vicinity. For the past 30 days railroad cars have been easier to obtain than before, they say.

Sand boat back but river ice keeps her idle

Pete Deimund, manager of the Cape Girardeau Sand Company, brought his new sand boat, "Grace," back here late Thursday afternoon to resume work on the river, but later in the night sent the boat into a harbor near the Bolz Cooperage Company, when ice appeared in the river in threatening quantities.

The boat was the first to appear on the river here since early in January, when ice stopped all river traffic. Deimund had the boat at Mound City for a few repairs on it and a barge, but brought it back this week believing that the ice was gone. He planned to resume sand operations next week, but will now wait until the river again clears up.