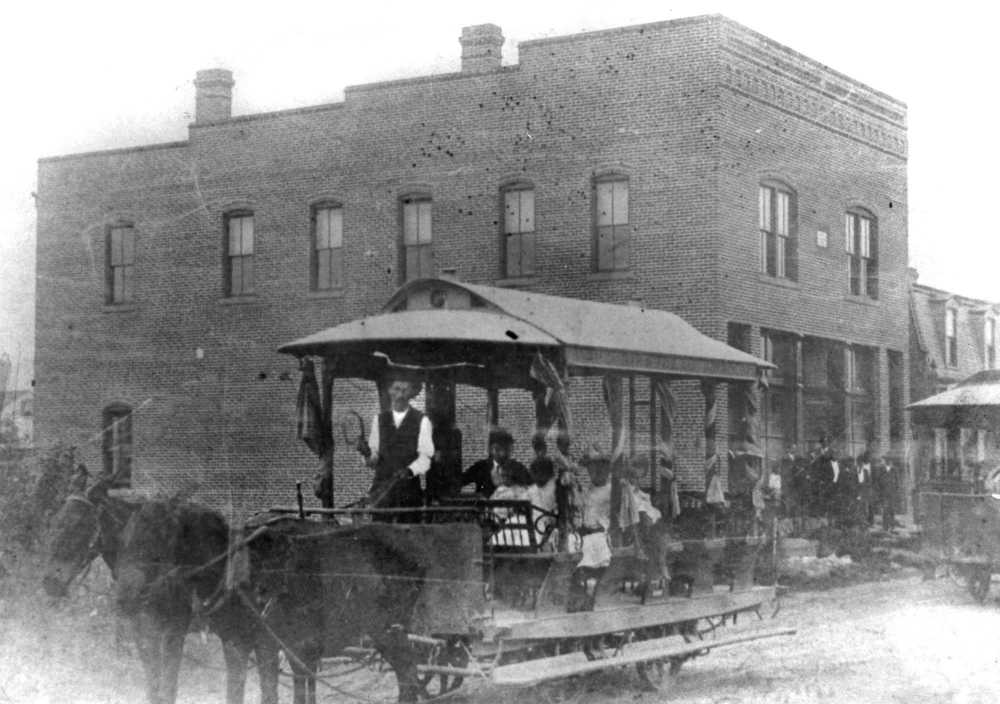 Before the electric street car system began in Cape Girardeau in 1905, the muley cars of the Cape Girardeau Ferry Co. traveled the "big square" around Cape Girardeau: Broadway to Sprigg to Good Hope to Spanish and back. The car barn was located on Good Hope, and 28 mules were stabled there. (Cape River Heritage Museum photo)

When we look through records about Cape Girardeau, the introduction of street cars was a definite turning point in the growth of the city. They showed the city had extended to the point residents needed some assistance in covering the distances to places they wanted to go.

Although buggies and horses were available for hire, they were expensive and unsuitable for many individuals. When the "college" was established on Normal Hill in 1873, a different, cheaper form of transportation became necessary within the city for everyone. The clang of the street car bell joined the whistle and bell sounds of steamboats familiar to ears of residents.

The first street cars were "muley cars." Their bells were a soft tinkle. Drivers of the cars were especially considerate of women passengers, and when a woman was not ready to board and waved for a driver to stop, if other passengers were agreeable, the driver would stop in front of the house and wait for the tardy passenger to board. Sometimes the tardy passenger was a child going to the training school at the "college."

The first rails were laid around the Big Square, which was Spanish Broadway (first known as Jackson), Sprigg and Good Hope. Later an extension was laid up Pacific Street hill to the Normal School. The fare was 5 cents a round trip. Sometimes the fare covered more than one trip, especially for a birthday party or a Sunday outing.

Mules had difficulty getting a firm footing when days were rainy or snowy, and often the small box-like cars jumped the tracks. Then the able-bodied men on board, and those who might be passing on the sidewalk, would lend their strength and push and shove until the car was back on track.

Children loved to ride the muley cars. They even gave names to some of the animals. A fun birthday was riding the muley car with friends 'round and 'round the loop, then returning home for ice cream and cake. That to many young Cape Girardeans was a perfect birthday party.

The idea of using mules to pull cars was introduced in Newcastle, England, in the mines. At first young boys from poor families were put in the mines to operate the coal cars, and not sent to school. When this was stopped, mules were used. The first muley cars in Cape Girardeau ran on 16-pound rails and the cars and mules came from Cairo, Ill.

The four muley cars and 28 mules were stored in a barn in Haarig, in the Frederick-Morgan Oak-Sprigg-Good Hope block, and the cars operated only during daylight hours.

Although muley cars were slow, the convenience compared to walking for older persons, especially if they had difficulty walking, was a great benefit. Besides, the residents became attached to the little mules, and often brought them "treats," especially on holidays.

Cape Girardeau residents have always established a bond of interest in things, both animals and individuals, that "gave the city a personal touch." Present-day residents can understand this attitude because of their interest in the 12 to 15 ducks on Capaha Lagoon in the city park; children and adults enjoy visiting and feeding them.

Men were experimenting with electric motors for trolley cars and new cars were purchased for Cape Girardeau in December 1905. The story of the electric street car will be another chapter in the city's bicentennial history.