Louis Houck on the stump 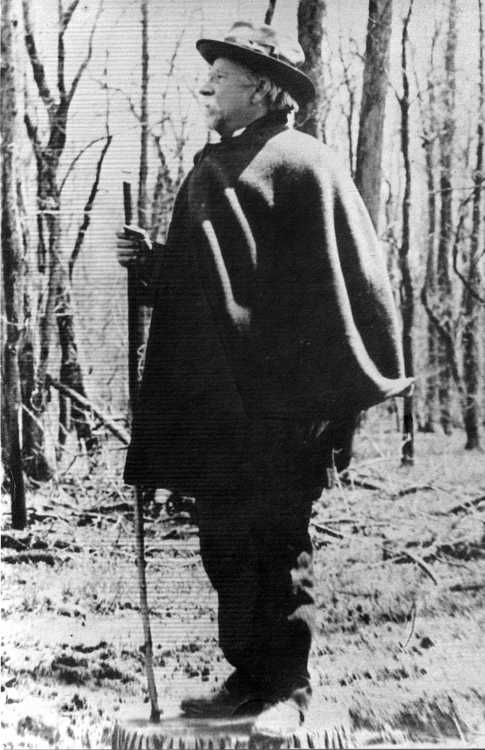 At the great memorial meeting held at the State College to eulogize Louis Houck, president of the Board of Regents for nearly 40 years, and recognized as the father of the institution, it was said that if a permanent memorial is to be erected it should be made from a picture that hung on the wall of his office, and under it should be the inscription, "It shall be done."

This is a copy of the picture. It was a kodak picture taken by Harry L. Albert when he was connected with State College and shows Mr. Houck standing on a stump looking out into the rapidly disappearing forest and swamp.

Mr. Houck was a man of boundless energy. He built railroads through country where highways could not be built, and it was his energy and determination that gave Southeast Missouri its network of railroads.

He had just sold his railroads when the present publishers came to Cape Girardeau in 1904 and had started work on the line from Cape to Perryville.

His History of Missouri

The greatest achievement of his busy life, from a public viewpoint, was the publication of his History of Missouri, three volumes, and his two volumes of Spanish Regime. It is said that no other state has such an accurate and comprehensive history of its early days, and it is a fact generally recognized that the numerous histories dealing with Missouri are based on the information found in Houck's History.

These histories were offered for sale at $18 per set and a few sets were sold. Then Mr. Houck sent a set to each high school in Missouri. More sets were sold to libraries in foreign countries than in America. Three sets were bought for the great international library at Haag, Holland, for use by The Hague. The Chinese government bought three sets and several other governments bought them.

It is said that Mr. Houck spent much leisure time during thirty years on his history and it cost him a fabulous sum. Had the 1200 sets been sold at $18 each he would hardly have received the cost of the printing alone.

As has been shown in other articles in this issue, Mr. Houck had much to do with putting this newspaper on a solid foundation.

His service to this city and district will be more fully appreciated by succeeding generations.