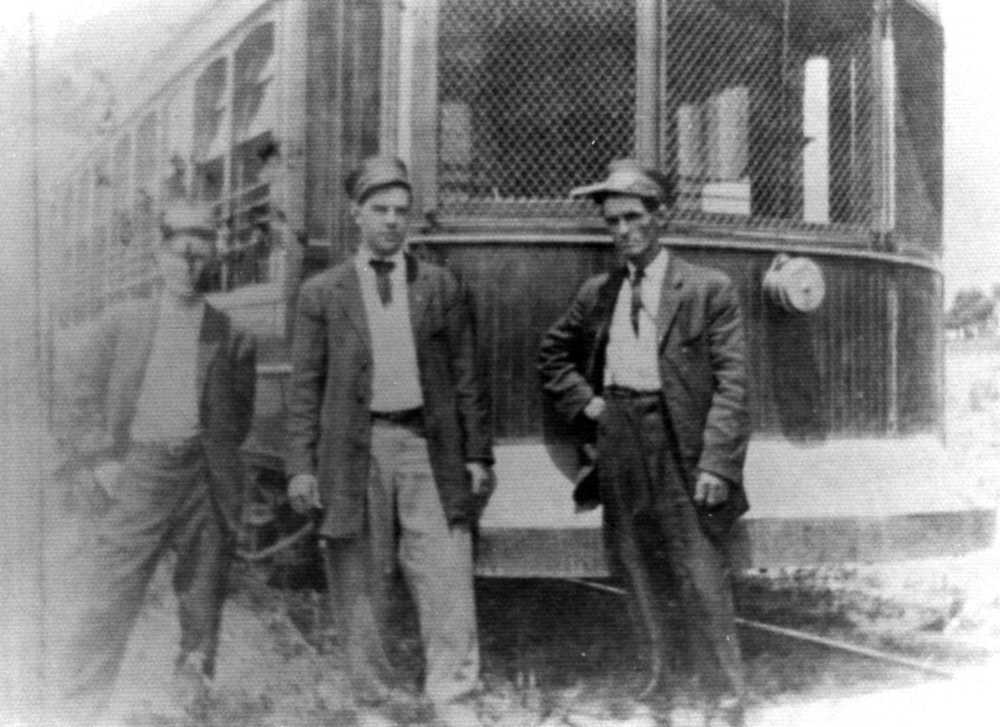 Three street car conductors posed for this picture alongside a trolley some time before 1915 in Cape Girardeau. Only Walter Poe, at right, has been identified. (Wanda Poe Fitzpatrick photo)

Has rendered service in Cape

To meet the growing demands for transportation in the absence of the speedier motor car of today, the first electric street car system was founded in Cape Girardeau 20 years ago, and its struggles to provide service at the minimum cost to the public is one of the most interesting events in the city's development.

Cape Girardeuu was the first, and is now, the only city in Missouri south of St. Louis to have a street car system and the line here is among the oldest in the state outside St. Louis and Kansas City. It was the establishment of the traction system here which lent to the city the air of a metropolis.

The first electric street car was operated in Cape Girardeau on Dec. 7, 1905, on what is now the line running from Good Hope street to the International Shoe Factory. Two days later, on Dec. 29, the first car moved over the tracks on Broadway and ascended Broadway hill. This track at that time ran from Main street to Henderson avenue, near the Teachers College. Later the track was laid to the Boulevard and on that street to William to complete the present loop.

For a few months prior to the inauguration of electric car service, an attempt was made to start horse-drawn trams, but this never proved successful.

E.W. Grieb and G.W. Whittaker were the first motormen of street cars in Cape Girardeau, both operating on what was then known as the William street line.

The line on Frederick street, which at first was run to the Frisco railroad shops in South Cape Girardeau, was in full operation until the abandonment of the shops there by the railroad and this caused the withdrawal of cars from this section. The track yet remains in several blocks on the street, but the electric wires have been torn down in most instances.

The original line ran past where the shoe factory is now located, but the extreme sector was abandoned, after the erection of the factory.

The Cape Girardeau-Jackson Interurban Railway Company, as the corporation which organized the system is known, was organized in 1905, in the most part by Cape Girardeau capitalists. The late William H. Harrison was president, D.A. Glenn was vice-president, Rodney Whitelaw was secretary, and L.S. Joseph, treasurer. Other members of the board of directors were W.H. Mueller of Jackson, J.H. Himmelberger, J.A. Matteson, J.A. Hickman of Puxico, and R.E. Gurley of St. Louis.

The original purpose was to build the tram line here and then eventually extend it to Jackson, Illmo and Fornfelt, a plan which the stockholders were never able to carry out.

The ties and rails for the street car system were put down under a contract awarded on Aug. 1, 1905, to M.E. Leming and A.R. Ponder, and the line contained approximately four miles of trackage.

Although the city council at that time granted a franchise to the street car company, there was much opposition voiced by property holders to the tracks being laid in the center of the streets, and on one occasion an injunction was secured to prevent the work on West Broadway.

Although the system in its early days had hard sledding, the patronage grew as the city spread out and with the erection of the shoe factory, hundreds of persons rode the cars daily. The coming of the automobile has necessarily cut into the business of the street car, but they are liberally patronized now.

Local interests continued in the control of the system until the Missouri Public Utilities Co. purchased the electric light and gas works here. Then controlling interest in the company passed to that concern and has remained there, and the street car company has been directed by the manager of the utilities company. Local stockholders disposed of their holdings in the company in 1922, and most of the common stock now is held by the Utilities Company.

In 1921 following an agreement with the city, the street car company spent $50,000 in the rebuilding of the system and acquired three new street cars of the most modern type at a cost of $8,000 each. In return for this the company was allowed to increase the fare from 5 cents, which it had been for 16 years, to 7 cents, the present scale.

The company now has seven cars, including the three new ones. Two of the four older cars are of the open type and are used in the summer months. The newest cars are known as the Birney Safety Car, seat 36 persons, are electrically heated and air-controlled.

Both the company and the city were in agreement that the system should be abandoned. The commission's order will become effective Aug. 24.

Authorization to discontinue this service was given by the company on the condition that it make proper improvements to the streets over which it now operates its street car system, after it removes tracks and lines.

The Cape Girardeau-Jackson interurban company applied to the commission on July 31 for permission to discontinue its system.

Both the city and the company agreed to make certain improvements on the streets over which the company now operates.

The order was written by Col. George H. English, and concurred in by other members of the commission.

The cars, in anticipation of the formal order, were taken out of service here Friday night.