Don McNeely said it would 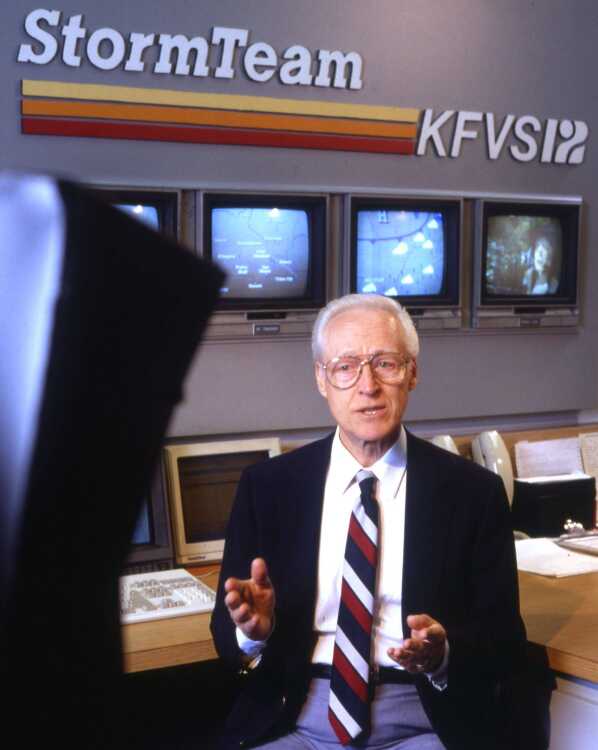 Don Said It Would

When news anchorman Mike Shain took a job at KFVS-TV, he received one bit of advice: watch how Don McNeely does it and do it the same way.

McNeely, whose name has become almost synonymous with KFVS-TV news and weather, has set the standard at the station for half a century.

He retires this week from full-time service after 50 years dedicated to the same call letters. His last broadcast is Friday, July 2 at 10 p.m.

McNeely, 66, will continue working for the station on a part-time basis doing special projects.

"Fifty seemed a good round number," McNeely said. "I really enjoy the work and the people, but the one thing that eventually got to be a drag was the rigid schedule. You have to be here on the air at a certain hour every day. I am looking forward to a more relaxed schedule."

A relaxed schedule will be quite a change for the veteran broadcaster.

McNeely started at KFVS radio in July 1943 at age 16. World War II was raging. Because many men were in military service, radio suffered a shortage of broadcasters.

Virginia Bahn, his fifth grade teacher from Franklin Elementary School, worked at the radio station and recommended young Don McNeely for a job.

The pay wasn't great. The studio was small and hot. He worked nine and 10 hour shifts. But McNeely loved it.

His love affair with broadcasting has continued for 50 years.

Howard Meagle, general manager of KFVS-TV, confides that although McNeely has earned his semi-retirement, "It scares me to death from a business standpoint."

Don McNeely is one of the best-known television personalities Meagle has ever worked with. A viewer survey in the mid-1980s proved the point.

The same survey asked viewers to rate the performance of on-air personalities. "Don's 'excellent' rating was the highest I've ever seen," said Meagle. "Nearly half the people surveyed said he did an excellent job. The other half said he did a very good job.

"He has always been there when people needed him, especially during severe weather," Meagle said.

"We get calls from people all the time saying he saved a life by giving people just enough warning before a storm.

"We believe Don is a city treasure, a natural resource," Meagle said.

"We chose to celebrate his 50 years," Meagle said. As one way to say thanks, the news studio will be named for McNeely. A ceremony dedicating the studio is planned for September.

Although McNeely loved radio, when Oscar C. Hirsch put KFVS-TV on the air in 1954, McNeely knew he belonged in the new medium.

McNeely said Hirsch was fascinated with engineering, technology and the business of broadcasting.

"I was primarily concerned with program and the product," he said. "That's the show biz end of the business.

"We had a very small staff," McNeely said. "We started kind of on a shoestring. Oscar Hirsch was frugal and believed in getting the most out of his resources. All of us wore several hats."

McNeely lists among his job titles program director from 1954 through 1980. His assignment was to plan what would fill the hours KFVS was on the air.

While much of the programming came from the CBS network, KFVS produced some local shows.

"We did a lot of kid shows that I hosted and helped create," McNeely said. He also developed an early morning program, unheard of at the time.

The Breakfast Show included news and weather, but provided a showcase for local talent.

"The changes in technology in the past 50 years have been mind boggling," he said.

When he started in radio, McNeely introduced the music, read a five-minute national newscast every hour and twice a day read 15 minutes of local news and weather.

"All the commercials were live and they were all one minute in length," he said. "That was even before the tape recorder had been invented."

The first television newscasts were simply voice over slides. "We didn't even have a camera," he said. A year or so later, two GE cameras were purchased at auction. "The newscast was me just sitting and reading the news. There were hardly any visuals."

A few years later, 16-millimeter film was introduced, but the film had to be sent to Memphis for processing, which took several days. "By the time it made it on the air, the news was a little stale."

Even when KFVS had its own processor, newscasts had just one or maybe two stories accompanied by film footage.

"Video revolutionized news," he said. "The first video tape recorder filled a room. Now they weigh less than a pound."

Technology has enhanced weather forecasting also. In early years, McNeely did much of his weather watching on the telephone. He called folks and quizzed them about approaching storms.

The weather map, for years with its Gristo Feeds logo, was simply a map with a piece of glass over it. McNeely drew in weather fronts and temperatures with a grease pencil.

People often wondered how McNeely could remember so many temperatures. He wrote the numbers in pencil on the glass before the broadcast. They were invisible to the camera but visible to McNeely.

Today, the map includes computer-generated graphics and within the last month, the news department has become computerized. Scripts are electronically projected to the teleprompter.

McNeely got the weather job at KFVS by default. "I was a pilot and had studied aviation weather," McNeely said. So when jobs were divvied up, he became the weatherman. He loved that, too.

When the station was purchased by American Family Broadcast Group in 1979, the staff was expanded and McNeely was given a choice of which hat to wear. He chose weather forecasting.

The reason, McNeely said, is simple. Tracking storms can help save lives.

"Through the years, we have been instrumental in saving a lot of lives because of timely storm warnings," McNeely said.

When McNeely celebrated his 40th anniversary with the station, a promotion was developed called, "Don Said It Would." Rain gauges and over 5,000 umbrellas with the saying were sold. "We still get requests," McNeely said.

"I get a lot of kidding about that. People say Don said it would and it didn't.

"Don makes the job look easy," said Mike Shain who has worked on the set with McNeely for two decades. "He has set a professional standard for us and Don's standards are pretty high.

"He never forgets anything," Shain said. "Around here, he's our dictionary. We are always asking him, 'How do you pronounce this' or 'How do you spell that' or 'Is this right?'

"Don has spent years studying the language," Shain said. "This is a business of words. And he always has the right word."

Shain said McNeely is most animated discussing his family or someone who used to work at KFVS.

"Isn't it nice when your day is made by something good happening to someone else?" said Shain.

"I've never heard Don say a mean, hurtful or harmful thing about anyone," Shain said. "He has amazing patience, except when there is an error. He will practically stop the show to correct a misspelling. He's very protective of the product."

Hildegarde Bader, who has worked with McNeely for nearly 39 years at KFVS-TV, agrees that McNeely has high expectations.

Bader is now program coordinator at the station. When she started, she was McNeely's assistant.

"He taught me such a lot, and he was a good teacher. He's very, very patient. I never heard Don raise is voice. He's very calm."

However, she said, McNeely demands quality. "He thought once you learned something, you should remember. And he hates mistakes. But for me that was good. It made me check things over more carefully.

"KFVS-TV is Don McNeely," she said. "It won't seem the same to me. I've enjoyed seeing the young people come in, grow and mature. But being one of the 'old folks,' I know I'm going to miss Don.

"It is difficult to find superlatives that really state the case," said Mike Beecher, news director for KFVS and McNeely's immediate supervisor for nine years. "Don is really a first-rate television broadcaster.

"He is the foundation of our tradition here. Very few have done what Don has done. To his credit, he has been able to adapt to the changes and he is a very sensitive man.

"The public has come to depend on him. He is really considered family by many of the folks in the Heartland," Beecher said.

Bob Reeves will take the helm of the StormTeam, doing evening weathercasts. "It's the other side of the clock for me," he said. For 11 years, he has worked on the

"We'll miss him," Reeves said. "When someone has worked in a place as effectively and professional and for such a long time as Don McNeely, he will be missed--not only by the viewers but by those of us used to working with him."

McNeely admits staying with one station an entire career is unheard of in broadcasting.

"I did have some good offers to move to other cities," he said. "But my wife and I always decided this is where we wanted to be. In retrospect, I know it was the right decision.

"Anywhere I travel--Florence, Italy; London; Yucatan, Mexico; Los Angeles--people have stopped me because they recognized me from KFVS," McNeely said. "It's so gratifying they feel they know you well enough to come up and say 'Hi.'

"It is really their interest and loyalty that has kept us in business all these years."