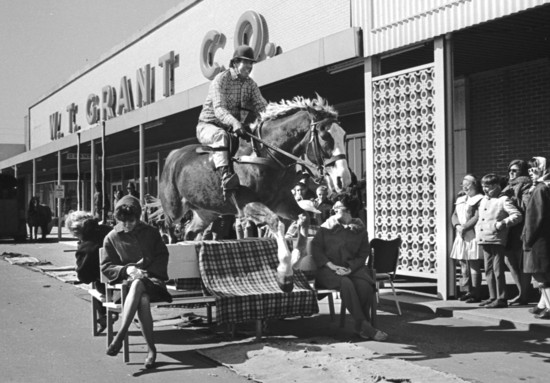 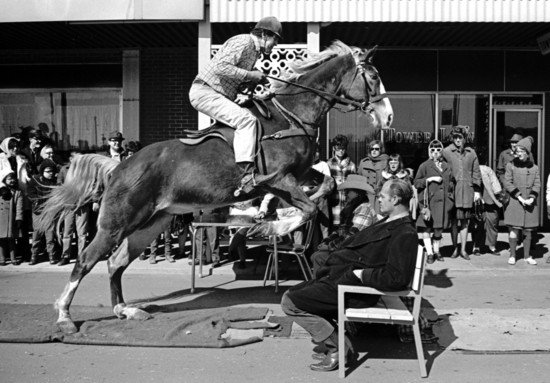 Stunt man says keys to his performance is planning

Dick Ryan, a Hollywood stunt man since the age of 16, believes the key to his performing successfully is planning. His list of credits as a horse jumper in movies and television go a long way in proving he is successful.

Ryan is currently in Cape Girardeau giving free horse jumping stunt performances at the Town Plaza parking lot, sponsored by the Town Plaza merchants. Remaining shows will be given tonight at 7 and Saturday morning at 11 o'clock.

Prior to performances, children will be allowed to ride Admiral, his 38-year-old movie pony. Ryan will perform many of the stunts he has done in movies and on television, explaining beforehand the planning that has gone into each.

"The secret to successful jumping isn't in the way you're built, but what you have in your mind," Ryan explains. "Before you do a stunt, you must plan it out. If you don't have a plan, you don't do the stunt. You use your mind, or you don't live."

"Women are normally better jumping horse riders than men," he continues, "because they have a light touch and are gentle on horses. Most men think they can overcome the horse with muscles, but a horse outweighs a man by six or seven times and could easily overcome a man. It takes gentleness and the use of planning to overcome the horse."

For the performances here he is using British Wonder, a horse which he has worked with and owned for 21 years and which he says is over 40 years old.

"When I bought the horse, I didn't know his age or that much about him," Ryan said. "But when he turned out to be such a good horse, I traced him back as far as I could and discovered he was at least 20 years old when I bought him."

Explaining the spryness of the horse after so many years in the business, he said, "British Wonder doesn't know he's supposed to be old, so he just goes on and on. He's just like any person who enjoys what he's doing."

Ryan went on to explain that 40 years old is not an amazingly long life for a horse. Horses live to be in their 60s, he said.

Ryan, a native of Amherstburg, Ontario, Canada, learned to jump horses when he was four or five years old. At 16, he started out in show business as one of the youngest persons ever to do horse jumping stunts in motion pictures.

Although most people don't recognize Ryan's name or face, they will remember the horse jumping scene of Thomas Mitchell in "Gone With the Wind." That was actually Ryan doing the stunts.

He and his pony, Admiral, were both in that film. Admiral was the pony ridden by Bonnie Blue, daughter of Rhett Butler and Scarlett O'Hara. Although Admiral no longer appears in movies, he still provides rides for children at Ryan's performances.

Ryan also supplied the ponies for the "Wizard of Oz," and was placed in charge of the 250 midgets who played the Munchkins in that movie.

Other movies in which he did the horse jumping scenes include the Jesse James pictures in the late 1930s, all the Errol Flynn movies and the Marx Brothers' "A Day at the Races."

Ryan has most recently appeared on television in episodes of "Gunsmoke," "The Virginian" and "The Big Valley."

Those who don't remember the stunt man for his movies may remember him as the man who put on the famous Armistice Day Rodeo in 1945 in Tokyo, Japan. During the rodeo, Emperor Hirohito allowed Ryan to ride his white Arabian stallion, Hatsushimo -- First Frost, around the arena.

Afterwards, the emperor presented the stallion to Ryan as a gift, after Gen. MacArthur turned it down. He brought it back to the United States where he still owns it today, although he doesn't use it in his shows.

Ryan now tours the country with his horse jumping act in the spring and summer after television filmings are completed. He has taught riding to such stars as Susan Hayward, Ronald Reagan and Linda Darnell.

Here is a YouTube video of a newsreel with Dick Ryan riding First Frost at the Armistice Day Rodeo in 1945 in Tokyo, Japan: