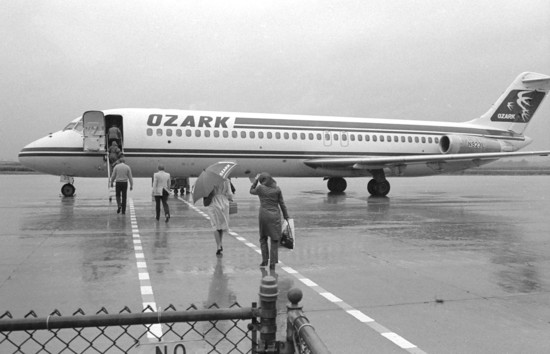 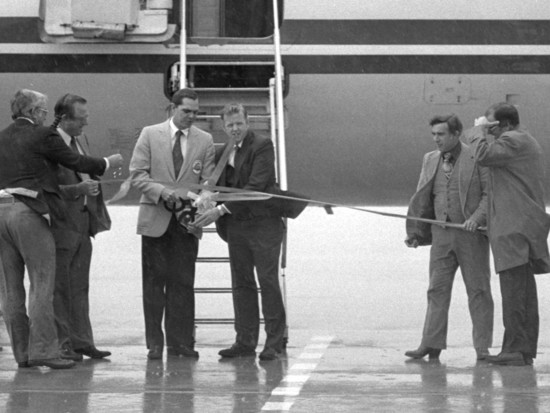 These people, making their way to Ozark Air Lines flight 959, were among the first passengers to fly from Cape Girardeau to St. Louis via regularly scheduled DC-9 jet service. The DC-9 flight at the Municipal Airport today marked the end of Ozark Air Lines' turbo-prop aircraft service to the city.

One observer said he believed the gathering at Cape Girardeau Municipal Airport today was the largest greeting committee ever to welcome something other than a person to the city.

A man waiting to board his flight asked if a presidential candidate was about to fly in.

It wasn't a candidate coming to Cape Girardeau, but it was something the city has been campaigning for a long time--DC-9 jet service.

A light rain and a low cloud ceiling delayed arrival of the jet, which was scheduled to complete its maiden journey from Lambert International Airport in St. Louis at 10:17 a.m. Touchdown came at 10:39 a.m., 22 minutes late.

A number of Cape Girardeau dignitaries, including Mayor Paul W. Stehr, Councilman Gail D. "Woody" Woodfin and Chamber of Commerce President Robert B. Hendrix were on board the first full-jet commercial flight.

The next DC-9 flight to Cape Girardeau is scheduled to arrive at the airport at 8:39 tonight, and will return non-stop to St. Louis shortly thereafter, arriving at Lambert International at 9:42 p.m.

A brief ribbon-cutting ceremony was conducted after the jet taxied to the airport terminal. Stehr commented Cape Girardeau has been anticipating DC-9 service for years.

"I don't know of any community that has fought harder for DC-9 service than this community," Morrison said following the ribbon cutting.

The DC-9 service replaces Ozark's Fairchild-Hiller turbo-prop aircraft, which was used for flights to and from Cape Girardeau since the 1960s. As of today, Ozark has phased out all Fairchild-Hiller service and has completely converted its flights to full-jet service.

Morrison noted Ozark's turbo-prop aircraft had served the airline well in the decade and a half they had been used by Ozark.

He said during the years the Fairchild-Hillers were in service, they carried a total of three times the population of Missouri, and traveled far enough to circle the world 3,800 times, or far enough to make 199 round trips to the moon.