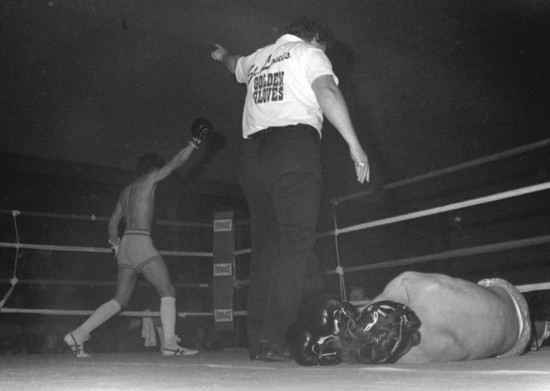 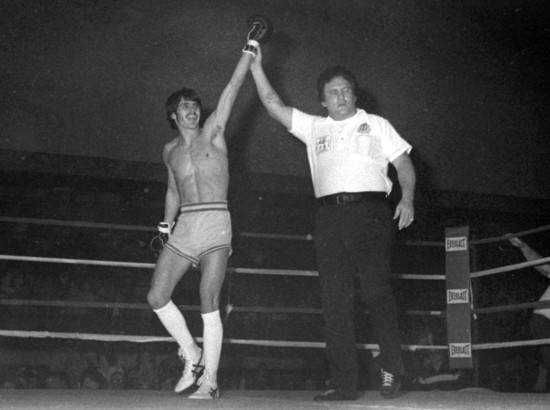 Johnny Vavak of Cape Girardeau parades triumphantly around the ring after knocking out Rick Stanfell of St. Louis during the first minute of their bout Monday night at the Arena Building. Below, Vavak accepts the outstanding boxer trophy from Congressman Bill Burlison at the conclusion of the 17-bout Golden Gloves card. (Fred Lynch photos) 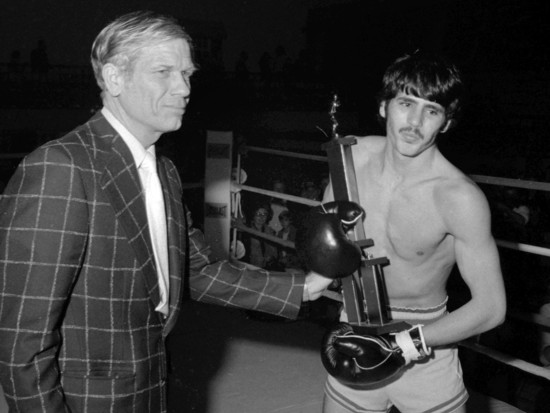 Boxing returns to Cape, big crowd at Arena for 17 bouts

A standing room only crowd estimated at 2,000 persons turned out for the return of Golden Gloves boxing to Cape Girardeau and the fans seemed to enjoy the three-hours-plus card of 17 bouts.

The crowd favorite, Johnny Vavak, a 1978 Cape Central graduate, won the outstanding boxer award after scoring the only knock out of the night in the final round.

Vavak, who just started boxing this summer, is now 3-0. With his hometown crowd roaring approval, Vavak went on the attack quickly and knocked out Rick Stanfell of St. Louis after just one minute of the first round.

"It is really great to have a boxing club in Cape," Vavak said as he greeted well wishers after the fight. "I'm really looking forward to the Golden Gloves tournament next month in St. Louis."

The fight card included boxers from 50 pounds up to heavyweight with most of the boxers from clubs in St. Louis. There were three Sikeston fighters who train at the City of Roses Athletic Club in Cape and six Cape boxers who had matches.

Two other Cape boxers won matches. Clarence Kelly, an 18-year-old senior at University High, won a decision over Keith Turner of the Twin Cities Boxing Club. Kelly brought the crowd alive in the third round of his bout when he stunned Turner with a right cross, causing a standing eight count.

Kelly continued to score with a strong right hand and became the first Cape boxer of the night to win.

Brady Williams, 22, of Cape, won at 165 pounds using an unusual and at times, wild style. Fighting Richard Ranking of Twin Cities, Williams toyed with his opponent in the first round and scored well in the second round.

The third and final round belonged to Williams as he continually tagged Ranking with good shots to the head as the crowd roared with approval.

Davis started the City of Roses Athletic club just three months ago, and this was the first fight card held in Cape Girardeau.