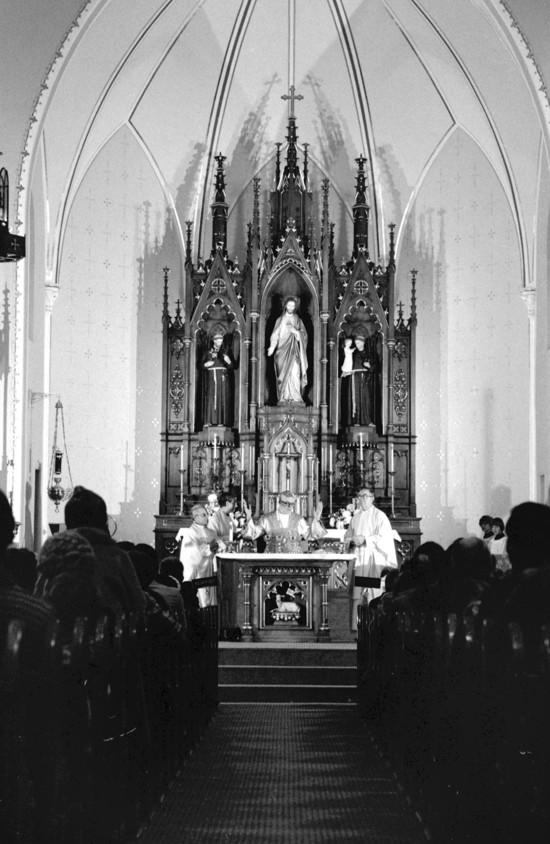 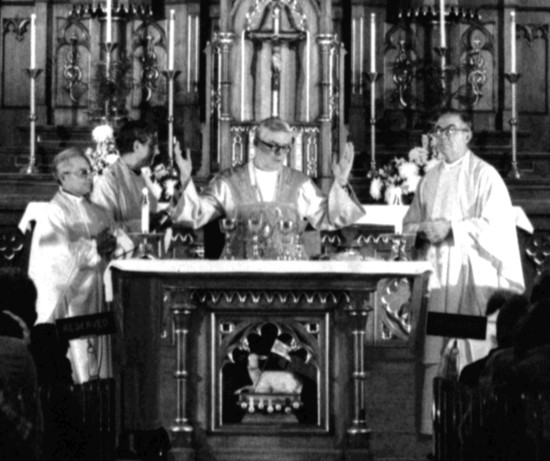 The Most Rev. Bernard F. Law, bishop of the Springfield-Cape Girardeau Diocese, center, addresses the crowd that filled St. Augustine Catholic Church in Kelso Friday night at a rededication service in honor of the restoration of the church. Also shown are the Rev. Raymond Orf, left, pastor of St. Augustine; the Rev. James Reynolds, pastor at Willow Springs and the Rev. Joseph Gosche, pastor of St. Mary Cathedral in Cape Girardeau.

KELSO -- St. Augustine Catholic Church in Kelso has been restored to its original Gothic beauty.

Ask any parishioner or guest present at the Friday night rededication ceremony who watched as lights lifted the church from a shadowy darkness to its full brilliance.

The service was held to allow the parish to give thanks for the completion of the giant undertaking, the Rev. Raymond Orf, pastor, said.

The Most Reverend Bernard F. Law, bishop of the Springfield-Cape Girardeau Diocese, and approximately 30 priests from the surrounding area, including Father Orf, entered the church in a processional after parish members and guests were seated.

Bishop Law served as the principal celebrant for the service, and addressed the gathering before he offered communion.

The restoration project was begun early last summer, following a decision made by parish members to restore their historic old church rather than to build a new one.

Extensive interior and exterior repairs were made, and a new rectory was constructed. The priceless stained glass windows were given new life and the ceilings and walls were repaired. New stations of the cross were installed, along with air conditioning, a new heating plant and new carpeting. The altars were also refinished.

Tom Sater, associated with Artisian Decorations of St. Louis, and Ted Wafford of the firm of Murphy, Downy, Wafford and Richmond, of St. Louis, were consultants for the interior restoration. Job supervisor for the project was Gene Cox of Kelso.

Law, who presides over the country's third-largest Catholic diocese, has maintained a high profile in Boston since he arrived last March and told a cheering crowd, "After Boston, there is only heaven."

As a member of the College of Cardinals, Law will advise the pope on church matters. Cardinals, who wear a distinctive red hat, also have the duty of selecting a new pope in a secret Vatican conclave.

Law came to Boston from the rural Diocese of Springfield-Cape Girardeau in Missouri, where he served the area's 52,000 Catholics for 10 years. In Boston, he succeeded Cardinal Huberto Medeiros, who died Sept. 17, 1983.