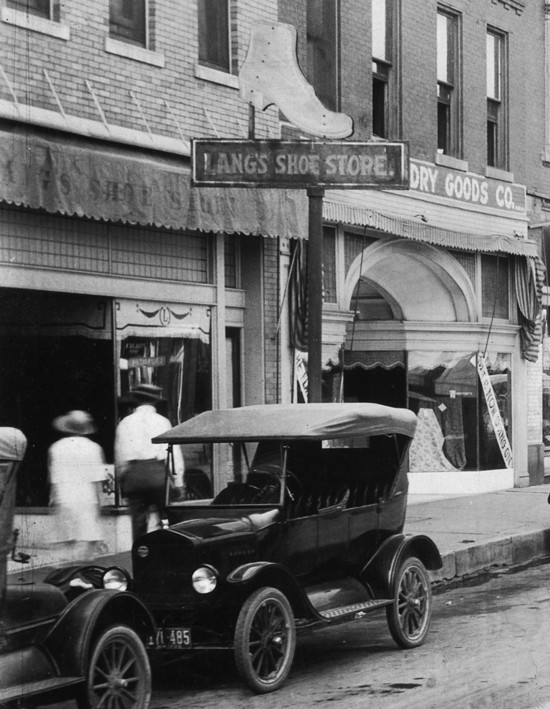 A. Lang will begin the complete renovation of his shoe store at 19 North Main as soon as the weather permits. Lang will tear out the front of the building and install modern show windows and an attractive entrance. The interior of the store is to be redecorated and the apartments over the place will be brought up to date. The improvements should be completed by March 1, according to Lang.

August Lang was in business for 41 years. He retired when the building he occupied was purchased in 1928 by Maurice Bohnsack, of the Bohnsack Clothing Co. which moved to that location.

Every pair of shoes in the house must be sold regardless of cost. Lang's Shoe Store is going out of business.

Entrepreneurship has long run in the Lang family of Cape Girardeau. Although August Lang had a shoe store, he probably arranged the apprenticeship of his son to Wieler's jewelry store in Cape Girardeau in 1905.

That's when Roger Lang's grandfather, Hugo August Lang, started working as an apprentice jeweler for Nick Wieler at his 126 N. Main St. location in Cape Girardeau. He was only 16. In 1916, Grandpa Hugo bought the business from Wieler, and it has been Lang's Jewelers ever since.

That gives the business the distinction of being "the oldest business in the same location, in the same family, in Cape Girardeau," according to Judith Anne Lang, Roger's wife.

The Langs do not know how long the business had been a jewelry store before 1905, but there is an original 1903 Waterbury clock on the store's east wall. Waterbury later evolved into Timex, said Lang.

Roger Lang, who took over the store from his father a year and a half ago, reports that his father salvaged a large box of photographs from the beginning of the 20th century, pictures that were intended for disposal. Four boxes of photographs had already been hauled to the dump, Lang said, when his father asked if he could have the last one. The men were just doing their job, said Lang, cleaning up Kassel's Studio, a photo studio immediately next door to the jewelry store.

Lang said Harry S. Truman reportedly sat in the back of Lang's Jewelers and visited with Grandpa Hugo after he bought the store. This was before Harry Truman "was Harry Truman." He may have been a state representative from Kansas City at the time, said Lang.

Grandpa Hugo retired and turned Lang's Jewelers over to his sons, Bernard and Hugo Jr., in 1955. In the 1950s, his grandfather did some remodeling and dropped the ceiling down. But a few years ago the Langs removed the 1950s ceiling, exposing the original painted tin ceiling. With this and some other changes, the store appears very much as it did 100 years ago.

[Lang's Jewelers closed in 2012 with the retirement of Roger and Judith Anne Lang.]

Read about a competitor of Lang on Broadway in this previous blog: