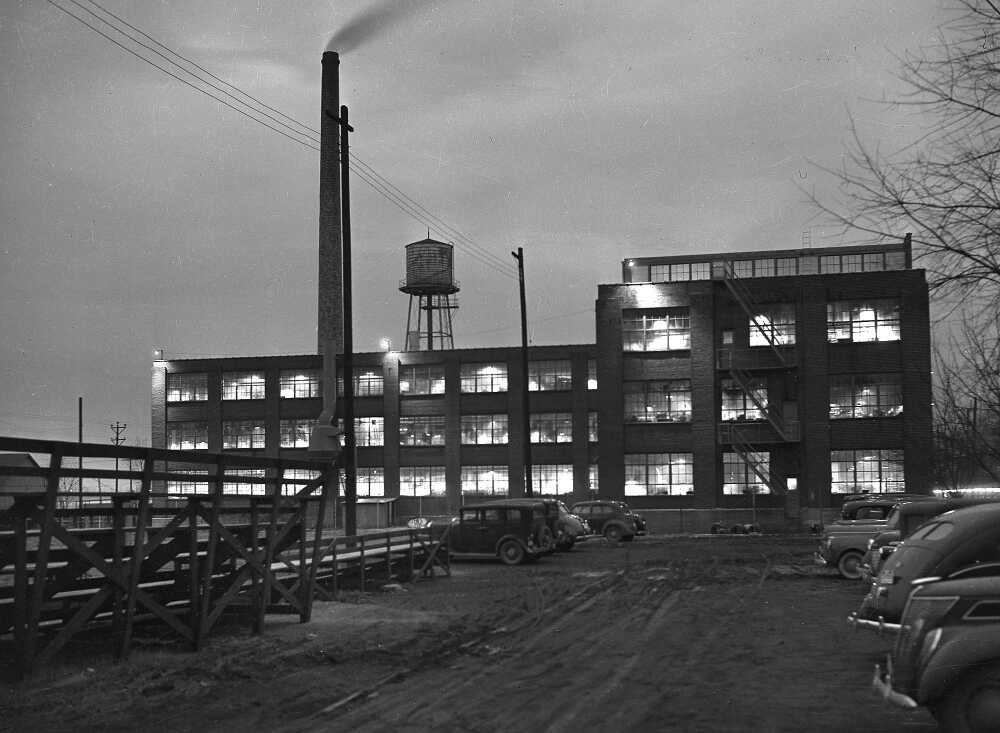 The International Shoe Co. factory was captured with lights ablaze by G.D. Fronabarger in this undated photograph.

Margaret Wiggins remembers sitting in a grassy field on the hood of her car, watching as the big building fell.

"It was built to last," said Wiggins, who worked in the shoe factory's office. "But they knocked that whole thing down."

That was 1990, when the building came down after standing near the corner of Mill and Main streets since 1907. Today, it is the proposed site of a $125 million Isle of Capri casino. But for many years, the shoe factory was a major employer and a major structure that towered over the city's north side.

More than 1 million bricks made up the mammoth factory's five stories that loomed over the Mississippi River. From 1907 to 1984 the shoe factory employed hundreds of Cape Girardeau workers, peaking at 1,600 in the mid-1920s.

"They were craftsmen, hard workers living the American dream," Wiggins said. "They were people whose talents were in their hands and hearts."

Heel trimmers and sole cutters were paid by the piece and Wiggins said there was "big money" for those who learned to do a quality job quickly.

Talks between the city and the Roberts, Johnson and Rand Shoe Co. of St. Louis began in 1906.

The Commercial Club, the predecessor of today's Chamber of Commerce, had to raise $60,000 to construct the factory building and in exchange, Roberts, Johnson and Rand agreed to pay $2 million in wages in 12 years. The city also donated the six-acre development site.

To raise the $60,000 needed, the Commercial Club split the property surrounding the shoe factory site into lots it sold for $200 each. Those who invested had their names entered into a lottery drawing for lots on which there would soon be two-bedroom clapboard houses painted in pastel colors. The Commercial Club drew 180 names for parcels of land on July 8, 1907. They were listed according to lot number in the next day's edition of The Daily Republican.

The shoe factory spurred the growth of the Red Star district, which got its name from the red star imprinted on the shoes made there. The side of the building, built by Penzel Construction of Jackson, bore a sign reading "Star Brand Shoes Are Better."

"It created a whole new emphasis through this region of town," Nickell said.

Cape Girardeau's most rapid period of growth was from 1906 to 1931, and the shoe factory had a part in that.

"When they wanted to stimulate the growth of the city, what they needed was some industry," Nickell said. "Similar to what they are talking about now. We need some stimulus; we need some industry; we need some jobs to bring growth to the town. The casino is sort of like the shoe factory. They have the same purpose."

"The work was very methodical. You could use farm workers and unskilled laborers," Nickell said.

Many people moved into the city, which had a population of about 5,000 when the shoe factory was built, from surrounding rural areas.

When Wiggins was working in the Florsheim office during the early 1980s, she remembers going up to the factory's fourth-floor storage area to get all the old payroll cards out of wooden cases they were kept in.

"Some of the people working there started when they were 14 or 15 years old. Back then, they went to school to a point, but they could go into the shoe factory and make a good adult wage," she said.

The factory was like an extended family, and many of its employees were family.

Wiggins said that when the company started sending American-made parts to India for assembly, it became clear eventually the entire shoe would be made overseas.

Florsheim, for the most part, left its dilapidated Main Street facility behind in 1969 and moved to a new plant along Southern Expressway. It continued to use the Main Street site for shoe leather cutting until 1984.

Isle of Capri plans to bring the area back to life. The $125 million casino is expected to have 1,000 slot machines, 28 table games, three restaurants, a lounge and terrace overlooking the Mississippi River and a 750-seat event center. It is expected to employ 450 people.