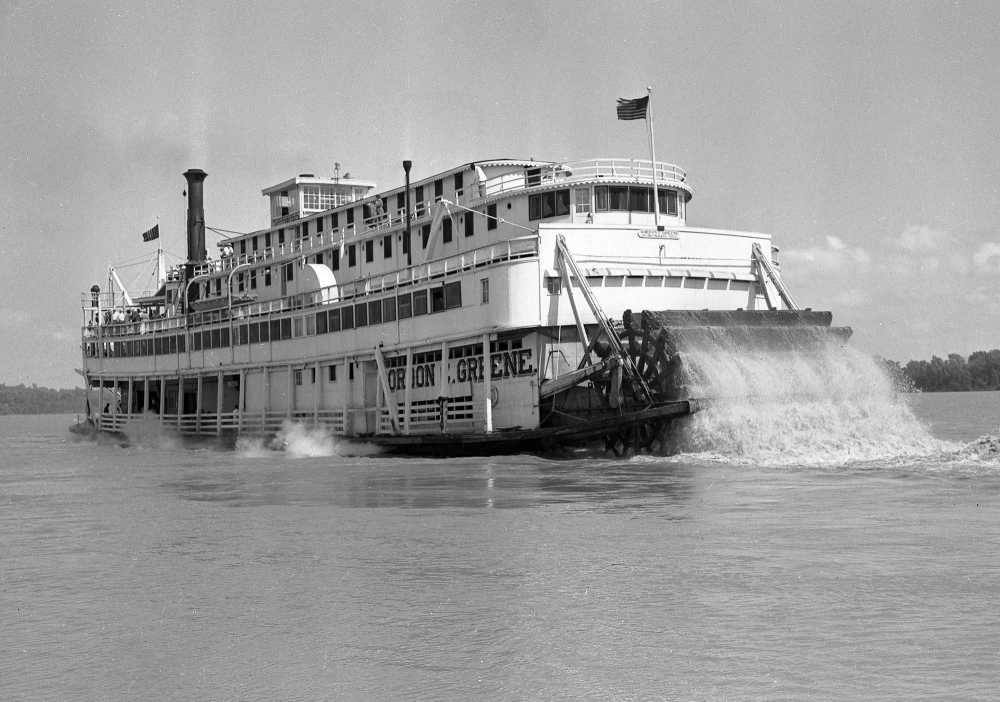 The steamer Gordon C. Greene, formerly the Cape Girardeau, moved up the Mississippi River at Cape Girardeau in this undated photo by G.D. Fronabarger.

The Sept. 26, 1951 Southeast Missourian reported the riverboat tied up at the Cape Girardeau riverfront for a time to pick up mail and supplies. The boat was on a return leg of a cruise from St. Louis to Chattanooga, Tenn. with 120 passengers aboard. The boat ceased trips on the river later in 1951. See below for more history.

Name of Steamer is Changed; Last of Noted Cape Boats Passes On

Notice is hereby given that authority has been granted by the Bureau of Navigation and Steamboat Inspection, Washington, D.C., to change the name of the steam stern wheel vessel called "Cape Girardeau," official No. 233,447, to "Gordon C. Greene."

That formal notice in a St. Louis newspaper the other day marks the passing of the last of the steamers Cape Girardeau, sale of which was recently announced in The Missourian. Bought from the Eagle Packet Co., the steamer, now the "Gordon C. Greene," will be placed in service on the Ohio River out of Cincinnati.

A letter from Capt. W.H. Leyhe to Norval Anderson of Commerce, recently said Capt. Buck saw the name "Cape Girardeau" painted out and the other name substituted. He also said the boat has been painted inside and out, and placed in tip top shape.

According to Wikipedia, the steamboat was built by the Howard Ship Yards & Dock Company for the Eagle Packet Company as the "Cape Girardeau." The ship carried passengers and freight between Louisville, Kentucky and St. Louis, Missouri. It was renamed the Gordon C. Greene when it was sold to Greene Line for $50,000 in 1935. The boat was withdrawn from service in 1951 after suffering a series of mechanical breakdowns.

It was sold in 1952 and passed through a series of owners. Under the name Sara Lee, the boat was converted to a floating hotel at Portsmouth, Ohio. Later it was renamed River Queen and served as a floating restaurant at Owensboro, Kentucky. Then later it became a tourist attraction at Bradenton, Florida. In 1954, its boilers were removed and fitted into the steamboat Avalon, now the Belle of Louisville.

In 1960, the boat was towed to New Orleans to be converted to a night club, but soon became a restaurant at Hannibal, Missouri. The boat was sold for the last time in 1964 and was based in St. Louis as a bar and restaurant. The River Queen sank at its moorings on Dec. 3, 1967.