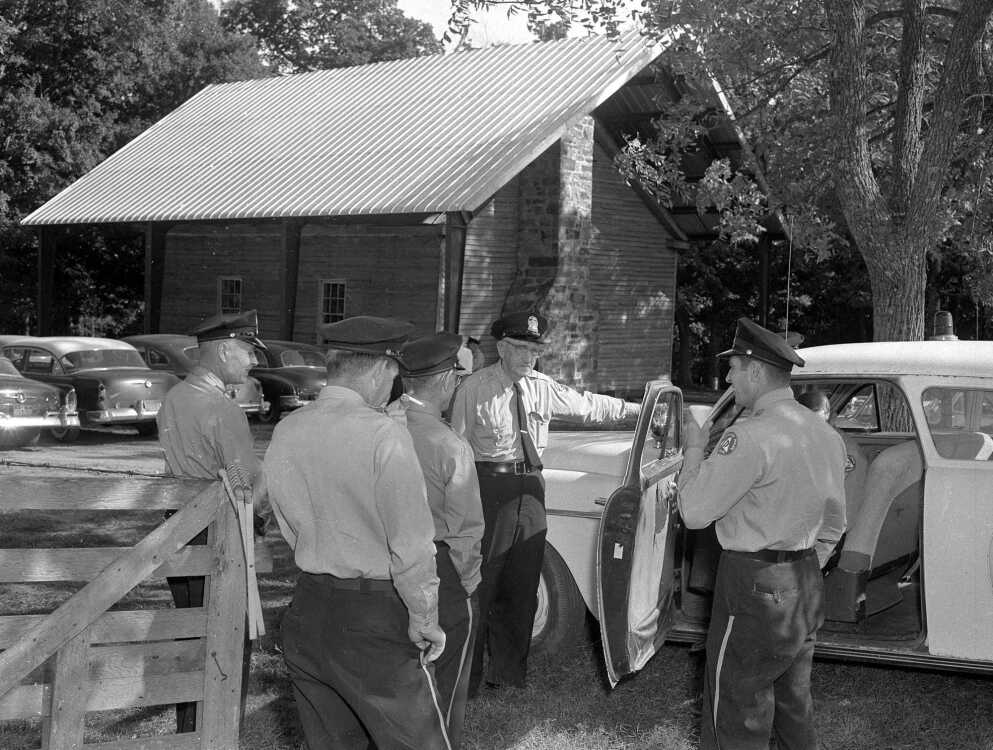 Members of the Cape Girardeau Auxiliary Police took a break from parking cars and traffic control outside Old McKendree Chapel near Jackson, Missouri at an annual service in this undated photo by G.D. Fronabarger. It would have been in 1959 or later. The last service at the chapel before the steel canopy was added was Sept. 14, 1958.

The Jan. 31, 1959 Achievement Edition of the Southeast Missourian has a picture of the new canopy that was built over Old McKendree Chapel. Here is an excerpt:

This picture shows old McKendree Chapel in its new dress, or perhaps it would be better to say it shows the ancient frame house under its new overcoat. The steel canopy rests on heavy concrete piling firmly imbedded in the earth so a windstorm can do it no damage. The canopy is considerably larger than the house, thus protecting the walls from the elements and as the steel covering is something new for such purposes it not only has a pleasant look but is guaranteed to last without end. The cost of the canopy was in excess of $6000, the trustees reported.

Around the building is a heavy concrete strip, which has the appearance of a sidewalk, and this is intended to protect the frame building from possible grass fires. As the chapel sets in a beautiful grove of large native trees that are perhaps several hundred years old, and as some show the effects of having been damaged by lightning, the building was lightning rodded several years ago. The canopy now covers the rods but as soon as the weather permits they will be taken down and placed on top of the new cover. Several of the adjacent trees were also rodded and this equipment will also be extended and improved.

The congregation was organized in 1806 and became known as McKendree Chapel because the roving missionary who first came was Bishop McKendree. Meetings of possibly a dozen families were held at intervals so the congregation was small. White people were scarce then and there is no mention of Indians having been present.

Eventually the building was put up. Probably it required a year or more to get it ready for services because even the rough benches had to be made by hand. There are about a dozen of them left that are in good condition. They are good for another century, some of the ministers say.

It will be noted that Mr. Houck in his History of Missouri stressed the fact that the house was built of "great hewn poplar logs" trimmed so precisely that evidently they needed no mud to caulk the seams. At one place these logs must be restored by men who are skilled in primitive construction work and there are men still available for such work.

Houck's History of Missouri, the best authority on Missouri history, has this to say of old McKendree Chapel:

"The first Methodist Church west of the Mississippi river was organized in about 1806, at McKendree, about three miles from the present town of Jackson, in Cape Girardeau county.... Soon afterward a house of worship, McKendree Chapel, was built of great hewn poplar logs."

Due to the efforts of volunteer workers the grounds at Old McKendree Chapel will be more attractive than ever when the annual service is held this coming Sunday afternoon.

In fact, the grass looks like the well-kept lawn of a private home. The reason for this is that members of McKendree Church at Jackson have, during the summer, brought out their power mowers and cut the grass at frequent intervals.

Also limbs have been removed from the grounds and dead ones on the trees have been cut and carried away.

Parking of automobiles will be no problem since the Auxiliary Police organization has taken over this responsibility.