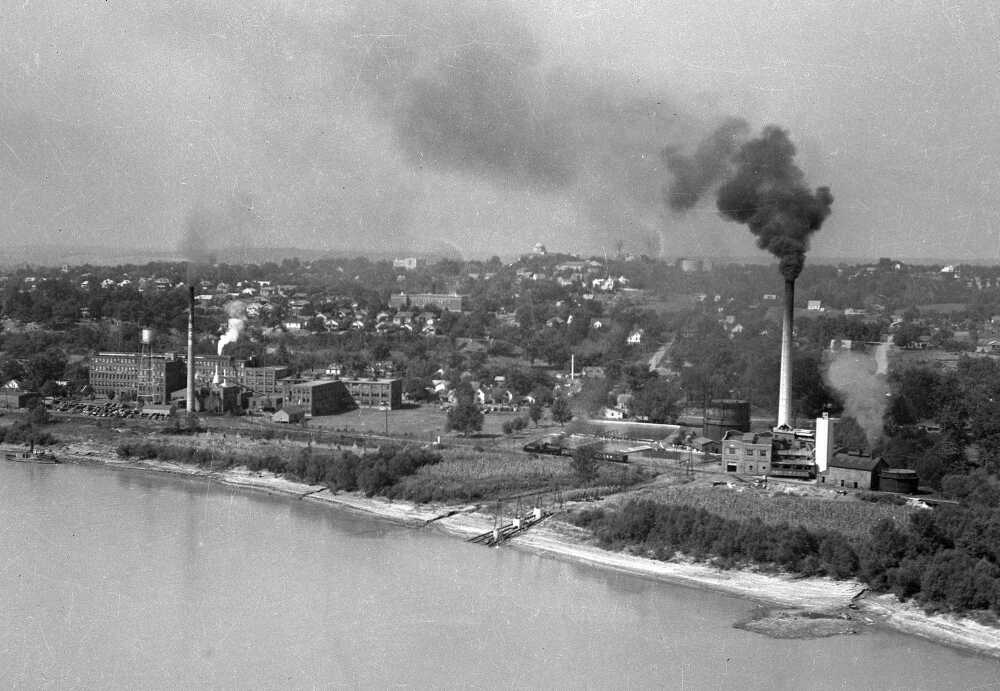 Two smokestacks are seen in Cape Girardeau near the Mississippi River in this photo by G.D. Fronabarger. At left is the International Shoe Co. and at right, the Missouri Utilities power plant. The photo might have been taken in 1949 and mentioned in the second story below.

The tallest smokestack now in Cape Girardeau was completed at the International Shoe Co. plant this week. Requiring four months for construction, it towers 175 feet in the air, being 50 feet higher than the one formerly in use at the large plant here.

The stack, of the most substantial build, is constructed of tile, cement and steel and was erected at a cost of $15,000. It is even larger than it appears, being 24 feet in diameter at the base and 10 feet at the top. Its tapering shape gives it an attractive appearance.

It is claimed that the great height of the smokestack is particularly advantageous in delivering the smoke farther from the plant and the section of the city in which it is located, and allow a much better draft than did the old one.

Nuisance From Soot, Smoke Up

Delegation calls on City Council to talk of problem

Elimination of a soot and smoke nuisance in Cape Girardeau, particularly in the north part of the city, was sought Friday afternoon by representatives of 244 petitioners who urged the City Council, in special called session, to take immediate action to abate what the petition termed "the soot menace which falls several times a week."

Also introduced, but withdrawn when it was determined that only four signers knew of its existence, was a resolution asking the city to draft an anti-smoke ordinance which would have required burning of a special type coal in the city.

Only the petition was left for consideration of the council. This was filed and City Attorney Albert M. Spradling Jr. was instructed to notify the Missouri Utilities Co., identified by the petitioners as the offender at its power plant, to meet with the council to see if an abatement plan can be worked out.

Dr. Zimmermann presented the petition. He told council members that if they felt there were not enough signers he believed it would be a simple matter to secure signatures from every women's club in the city and from others.

He observed that a request for action on smoke is nothing new, recalling that years ago when a Board of Health was active a similar petition was presented to it. He said that the matter, referred to the council, was not considered.

Without identifying the source, Dr. Zimmermann said that several years ago he had an opportunity to see some local boilers in action. He said that in all but one coal was crushed and then blown into the fire box. At the chimney no smoke could be seen. But adjacent to these was a hand-fired furnace. It belched black smoke, he said.

At this point he passed pictures of a plant over to council members. They showed black smoke pouring from the plant he had in mind. Continuing, Dr. Zimmermann said this was an illustration that black smoke can be eliminated and is caused by hand-fired methods.

He said that he and others were promised at that time that a new boiler would be secured to replace the hand-fired one. But, he observed, it has apparently not been done. Now, he went on, residents in the north part of town cannot open their windows because of the ash and soot and cannot sit on outside furniture because of the black covering which falls on it.

And, he declared, every part of town gets its dose, depending on the direction of the wind. He urged the council not to let the matter go by default.

Commissioner Charles Schweer wondered if passing trains could cause much of the smoke. Mrs. Taveggia replied that it did not come from the trains. Mayor Walter H. Ford asked directly if it was from the utilities company. The visitors replied that it was.

Dr. Herbert said that at St. Francis Hospital it was impossible to leave windows open in the summer while physicians were preparing for cases. He said that equipment must be sterile, but that material which comes in prevents this and the room must be set up with windows closed.

Mr. Baker, following comment that there were numerous offenders, said, "I don't want to confuse this issue. I signed the petition for one special reason. It's against the utilities company alone. I could be mistaken, but we're not asking for an iron-clad smoke ordinance where we would have to pay $16 or $18 a ton for coal.

"In the north end it all comes from the Missouri Utilities. We have always been bothered when the air comes a certain way, with soot. Now we've found something else. It used to be cleaned out of the bottom of the stack. Now they have a blower to blow it. Not only is there soot, but there is also sand."

He said he recently put in new floors and when they are walked over sand is felt beneath the feet. The blower is operated at least once a day, he said.

He declared residents of the north part of the city feel the utilities can afford to correct the trouble and hope that the company will find a way.

Here Mayor Ford pointed out that the resolution called for a general anti-smoke ordinance which would effect everyone in the city, while the petition seemed directed at only one source of the difficulty. In the discussion that followed the resolution was withdrawn and the petition allowed to stand.

Commissioner Schweer said it is a condition which exists all over town and Dr. Zimmermann replied that his was the reason he felt that one industry should not be singled out.

Mayor Ford said it would be impossible to use smokeless coal at its high price and Mr. Spradling said to have an anti-smoke ordinance would require a trained smoke commissioner, which would be too expensive for the city to maintain.