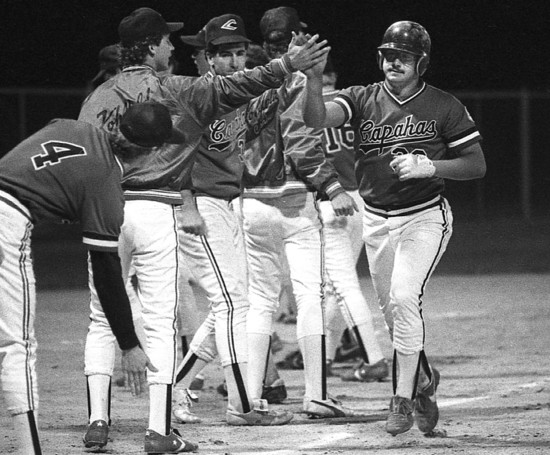 Chris Janet, right, of the Kohlfeld Capahas baseball team receives congratulations from his teammates after hitting the tie-breaking home run against Festus Friday night, June 28, 1985. Janet's shot, one of two homers he had in the game, gave the Capahas a 5-4 lead and helped pace their 7-5 victory at Capaha Park. 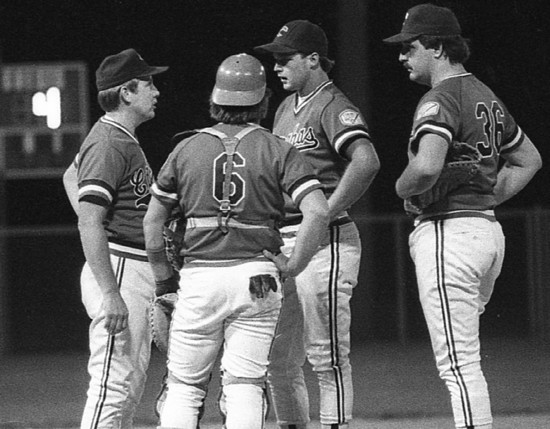 Power display by Janet paces Caps to another win

Chris Janet and Barry Govro know each other fairly well--but after what Janet did to Govro Friday night, it's likely the latter wishes he had never heard of the former.

Janet drilled a pair of home runs, including a tie-breaking shot leading off the bottom of the seventh inning, to pace the sizzling Kohlfeld Capahas of Cape Girardeau to a 7-5 victory over Govro and Festus Friday night at Capaha Park.

The Capahas, in raising their record to 17-3, had won 15 straight games entering a Saturday doubleheader in St. Louis against the Rangers. They'll return home for a 1 p.m. twin bill today against Matthews Dickey of St. Louis.

Govro, a righthander, and Capaha lefty Brian Becker were matched in a 4-4 tie entering the bottom of the seventh. But Janet led off with his home run to left field, giving the Caps a 5-4 lead. After Mark Simmons and Joe Radetic each singled, Kevin Urhahn plated both with a double to make it 7-4 and give Becker and reliever Jeff Bohnert some breathing room.

Janet had given the Capahas a 2-0 lead in the first when he drilled a blast over the left-center field fence. The blow came two outs after Jay Connell had led off with a single.

"I was seeing the ball pretty well tonight," said Janet, who also had a single to account for three of the Capahas' 13 hits. "I know Govro pretty well. He threw a bunch of curves tonight, but he said later he probably should have thrown me fastballs. I jumped on the first one pretty good."

After getting off to the 2-0 lead, the Capahas had trouble with Festus, which entered the contest with an 18-6 record. The visitors got two in the third for a 2-2 tie, then added single runs in the fourth and fifth to go ahead, 4-2.

"We knew they'd be tough," said Janet. "They came out and played well."

The Capahas came back with two in the fifth, forging a 4-4 tie and setting things up for their three-run seventh.

Becker, who got the victory, was taken out in the top of the eighth after the first two Festus batters reached base on a hit and a walk. In came Bohnert, the Capahas' relief ace, and he managed to put out the fire.

Festus scored a run in the ninth on a homer by Bill Pruneau, but Bohnert nailed down the win for Becker. He wound up with three strikeouts in two innings.

"He did a good job," said Capaha manager Jess Bolen. "I've made up my mind to use him as a reliever. He throws strikes and he's got a good pickoff move.

"Everybody wants to be a starter, but he's so valuable to us as a reliever. He can pitch a few days in a row. When you add it up, he'll probably be pitching almost as much as a starter anyway."

Becker gave up just five hits in seven innings while striking out seven. But he was wild, walking seven batters.

"He threw a pretty good game, but he was a little wild," said Bolen. "He hadn't pitched in two weeks."

Because of a pair of canceled doubleheaders, none of the Capahas had played since the previous Friday, and Bolen said that made a difference.

"A layoff always hurts," he said. "It especially hurts your hitting because you don't bat for a while. But defensively, we played well."

Even with the layoff, the Capahas managed 13 hits, Simmons, Urhahn and Keith Boeller getting two apiece.

But it was Janet who was the batting star Friday night. The former SEMO State standout, a veteran of several seasons with the Capahas, expressed some surprise at the team's blazing start, in particular the 15-game winning streak.

"It really is surprising," he said. "We lost a lot of veterans from last year. But the younger guys are coming through and having good years."