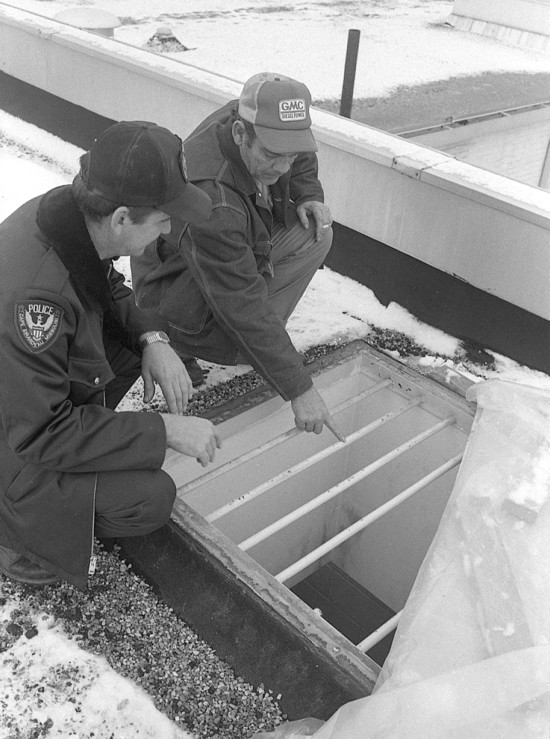 Cape Girardeau Police Sgt. Carl Pease, left, and public works employee Bill Beckett examine a skylight on the roof of the Cape Girardeau Police headquarters where two prisoners escaped from the federal cell-block between Wednesday night and Thursday afternoon, Jan. 16-17, 1985. An iron bar was cut during the escape. Below, Pease shows the skylight in the cell-block where Donald Jerome Freeman and Gregory Lynn Halter escaped. See story below. (Jay Wolz photos) 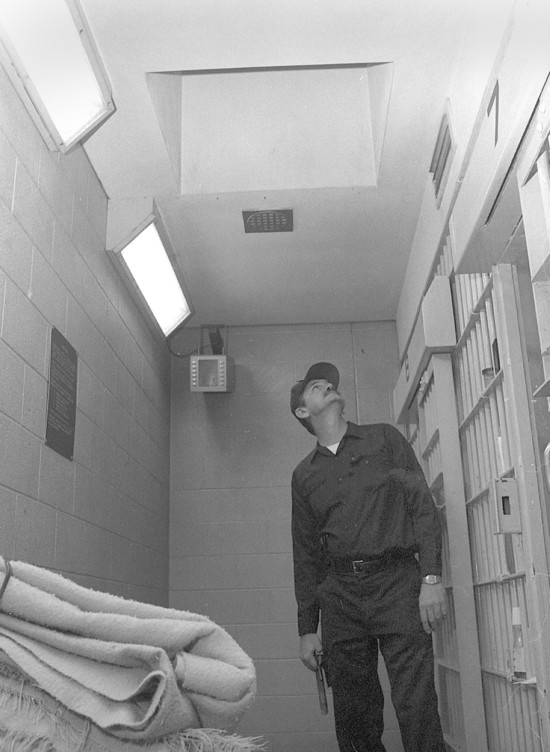 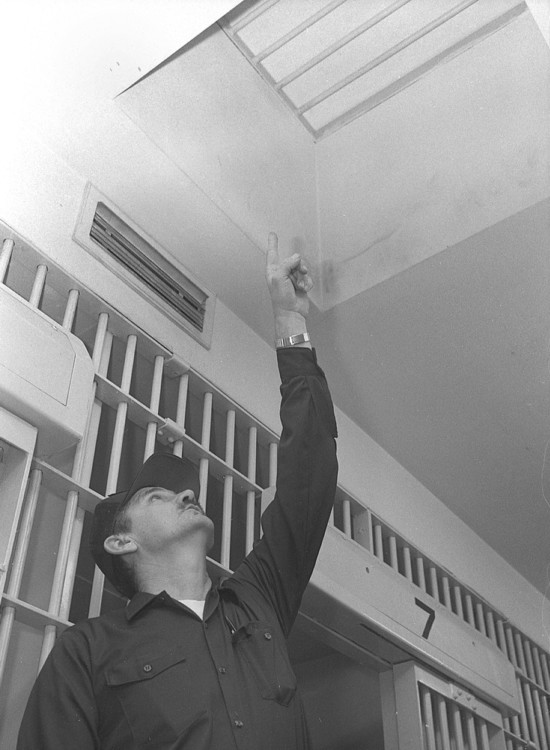 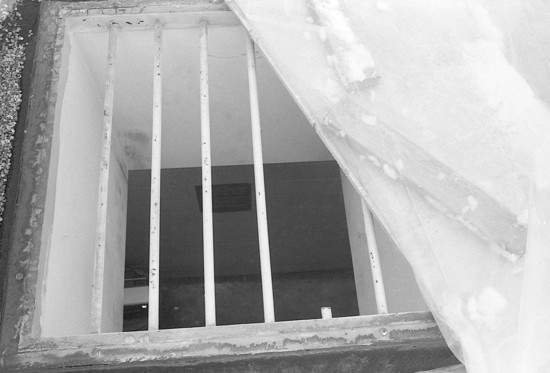 Cape Girardeau police were asking themselves a lot of questions today about how two city jail inmates managed to escape undetected through a cell-block skylight and lower themselves two stories from the roof of police headquarters using a rope fashioned from blankets in their cells.

An internal investigation is under way to determine how the prisoners --Donald Jerome Freeman, 24, of Sikeston, and Gregory Lynn Halter, 22, of Oklahoma City -- broke out sometime between Wednesday night and Thursday afternoon.

Both remained at large.

A jail employee discovered the two federal prisoners missing at about 1:30 p.m. Thursday. Freeman was awaiting trial on a federal drug charge and Halter was being held on a federal firearms violation.

"We're not positive (when they escaped)," remarked Cape Girardeau Chief of Police D. Ray Johnson. "All we can verify is that at 1:35 p.m. we learned that two of the prisoners were missing."

Johnson said much of what police believe happened is speculative. He said it is thought Freeman and Halter fashioned a cutting tool out of a slat from a ventilation duct. He said a piece of vent slat was discovered in the cell area after the escape.

The chief said it is possible Halter and Freeman climbed up into a recessed area of the cell-block ceiling leading to the skylight and, over an extended period of time, perhaps days or weeks, sawed through a one-inch diameter iron bar which separated them from the plastic skylight.

Although a closed-circuit television camera was monitoring the cell-block, the camera had no direct view of the interior of the cells nor the recessed area of the ceiling leading to the skylight.

"All we can assume at this point is that they somehow got into that recessed area unseen and then sawed through the bar while they were out of the vision of the camera," Johnson said, noting that while it is possible to monitor sounds in the cell-blocks, no one detected sawing noises prior to the escape.

Freeman and Halter were two of five federal prisoners being held in the jail under contractual agreement with the U.S. Marshal's Service. All five were held in a common cell-block and had free access to the cell-block corridor.

"What we're dealing with are prisoners who are held here for extended periods of time and there is a need to let these people out into a common area," Johnson explained. He pointed out that although the federal prisoners had free access to the cell-block corridor, there was a locked, barred door separating their cell-block from the rest of the jail.

The chief said it has been common in the past for federal prisoners to remain unseen for hours at a time. "We have jailers on duty from 7 a.m. until 11 p.m.," he explained. "They make daily contact with these people and then from 11 p.m. until 7 a.m. the station commander makes an hourly check. He walks through the area and counts everyone...except those in the federal prisoner cell-block.

Johnson said it wasn't unusual not to count all the federal prisoners during every inspection because they "were still behind three secured doors."

Asked how long it would have taken to cut through the iron bar leading to the skylight, Johnson said he would be "hard pressed" to offer an estimate. "It would take a considerable amount of time with any type of instrument they would have access to," he said. But he added he is "confident that no hacksaw blade or any instrument like that was brought into the jail."

He theorized Freeman and Halter used a sheet or blanket to fashion a sling from the bars below the skylight to support them while they worked.

The escapees were not missed at meal times on Thursday, Johnson said, because the meals were passed into the cell-block through the barred door.

The blanket-rope they used to climb down from the roof remained draped from the side of the police station until Thursday afternoon. Johnson said it was not noticed before then because tall evergreen trees partially obscured it.

There are no leads at this point as to the escapees' whereabouts. Federal authorities say that Halter, by virtue of his firearms charge, should be considered armed and dangerous.

This was the first escape from the jail since June 1979, when Eugene Autry Griffin, who was convicted of assault and was being held on a detainer for Tennessee authorities, escaped apparently by walking through two presumably locked cell doors.

Johnson said this is the first time any prisoners have escaped through the roof of the jail.

He said the internal investigation, which is being headed by Lt. Dale Ratliff, is aimed at determining "if there was a violation of procedure or security" which led to the escape. "I am not considering at this point that it was a breakdown of procedure."

Asked whether there will be any structural changes a the jail to prevent similar escapes, Johnson said, "definitely...we're making those right now."

In a follow-up story Jan. 20, 1985, it was reported that the city Public Works Department would add one-inch bars to the six skylights. It would also install bars at the ceiling below the three-foot-deep recessed area below them to prevent prisoners from crawling into the recessed area.

Police chief D. Ray Johnson also said a six-inch-long piece of metal was found later in the cell-block from which the prisoners escaped. The flat piece of metal was about the thickness of a saw blade and had no teeth. He theorized it might have been removed from inside a wall, possibly at a joint.

Gregory Lynn Halter was arrested without incident in Oklahoma City at the residence of a female friend on Jan. 27, 1985. U.S. marshals had been watching the residence since a day earlier on the belief Halter might go there.

Donald Jerome Freeman was arrested in the attic of his girlfriend's home in Sikeston on Jan. 30, 1985. Police stormed the home after evacuating about 50 people from the neighborhood. The house had been under surveillance since the escape.