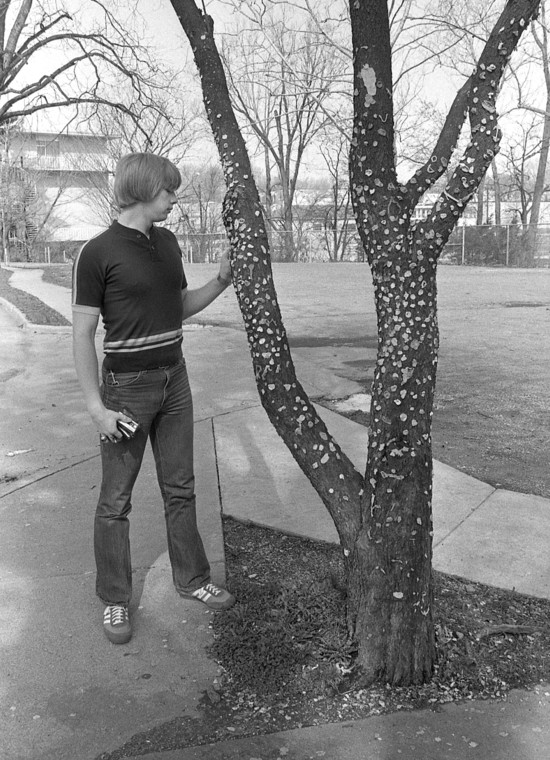 Gary Schechterly, a SEMO State University student from St. Charles, Missouri, makes his contribution to the "Gum Tree" at Pacific and Alta Vista. The tree has become a campus landmark in recent years. (Fred Lynch photo)

A redbud tree at the top of the inclined walkway between Towers residence hall complex and the corner of Pacific and Alta Vista, the Gum Tree is something of a self-made monument to campus life.

"I don't know exactly when it started," said Dr. Charles Korns, professor of agriculture at SEMO and the man who maintains the trees and plants on campus. "It was here when I came here in 1970. But I think it started when Towers was built in the mid-60s."

Dr. Korns said there was yet another Gum Tree by Brandt Music Hall, but it became diseased and had to be cut.

"The gum doesn't seem to harm the trees though," he said.

More gum--every flavor and every sticky color--has been put on the tree since Dr. Korns arrived. "It accumulates more gum every time I see it," he said.

He also noted that most of the gum put on the tree will stay there. "If the gum is pressed on the bark, it should stay on the tree," he said. "I don't think there's any way freezing and thawing would knock it off."

As to why so many students place so much gum on the tree, Dr. Korns had no idea. "Unless," he quipped, "maybe students get tired walking up that hill and don't have the energy to chew gum and walk at the same time."

This redbud tree met a violent end. It fell to the vandal's ax in October, 1989.

According to a Southeast Missourian story published Oct. 29, 1989, the university's supervisor of buildings and ground services, Jim McGinnis, said the tree was apparently cut down with an ax because there were wood chips around the ground surrounding it.

McGinnis turned the matter over to the university's Department of Public Safety. DPS director Doug Richards said no suspects existed and no witnesses to the crime were known at that time.

Another tree was planted on the spot and has survived.

Read about the current Gum Tree in this story by J.C. Reeves in The Arrow: