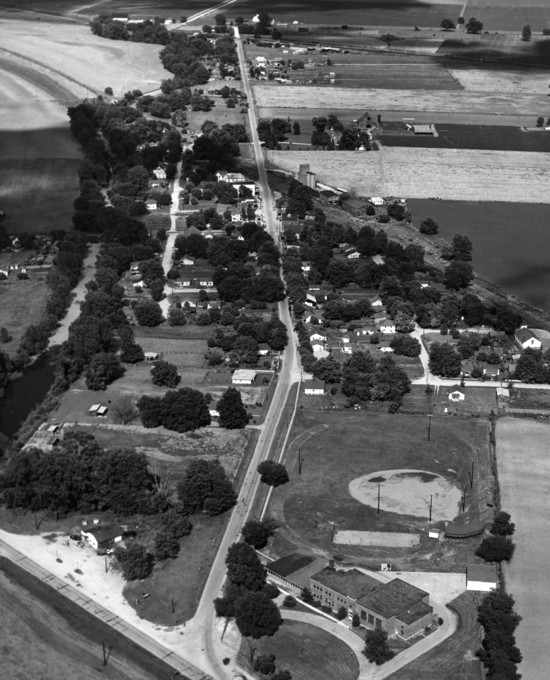 This aerial photo of McClure, Illinois made by G.D. Fronabarger is looking east toward the Shawnee hills and shows the public school in the foreground. At the left may be seen a part of Clear Creek, and at center right the home of the late Thomas McClure, the community's leader and for whose family it was named. In the background are railroads and an alfalfa mill. The business section is centered around the street running the length of the photo.

The town of McClure was first known as Clear Creek Landing, the first recorded resident of which was about 1811. It became a regular stop for river boats which took on cargoes of wheat, which was the principal crop for miles around. Because of the huge wheat crops raised in that area the name was later changed from Clear Creek Landing to Wheatland.

While the community was still known as Clear Creek Landing in 1835, Judge Levi L. Lightner, grandfather of Mrs. Edith Caldwell, 1305 Broadway, went there from Cape Girardeau and established a store.

When the Illinois Central Railroad was built the station was called McClure after Thomas McClure, one of the early settlers of the area. Later the name of the postoffice was changed to McClure. In addition to the McClures some of the early families who still have descendants living in the area are the Bunches, Lightners and McRavens.

The first class to graduate from the McClure Community High School was in 1923. In 1938 a new high school was erected and pupils continued using that building until 1952 when junior high school and high school pupils were transferred to the Shawnee High School.

Roads in the McClure area were extremely poor until the 1920s, and travel to Cape Girardeau, the closest large town, was made by ferry across the Mississippi River. Today McClure has access to Routes 3 and 146 leading south to Cairo, west to Cape Girardeau and north to St. Louis. The town is also served by the Illinois Central and the Missouri Pacific railroads.

McClure is protected from flood waters of the Mississippi River by a system of levees, the first of which was built in 1914-15.

Approximately 600 people make their home in McClure today. The town has two churches, the Missionary Baptist and the Pentecostal, a modern grade school building for children in the first six grades, serving school lunches to about 150 from the cafeteria. The National Alfalfa Mill employs about 40 persons and a grain elevator gives employment to more.

The town is ideally situated for sportsmen, being located between Horseshoe Lake and the Alexander County Game Reserve. Most of its owners are owners of farms, employes of river traffic firms and highway construction workers. People of the community make Cape Girardeau their chief shopping center.