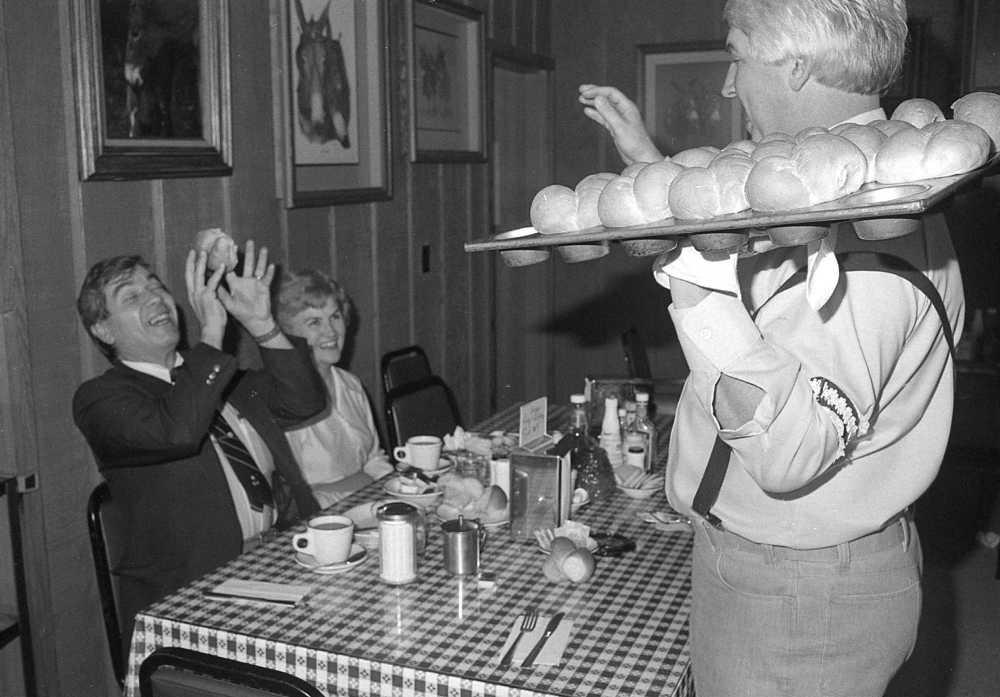 Above, Norman Lambert tosses a roll to Cliff Morris of Sikeston as his wife, Carol, looks on. Below, former football coach Norman Lambert readies his throwing arm. Only this time it's homemade rolls, not a pigskin he's going to throw. The roll throwing has become somewhat of a trademark at Lambert's Cafe in Sikeston. (Tim Landis photos) 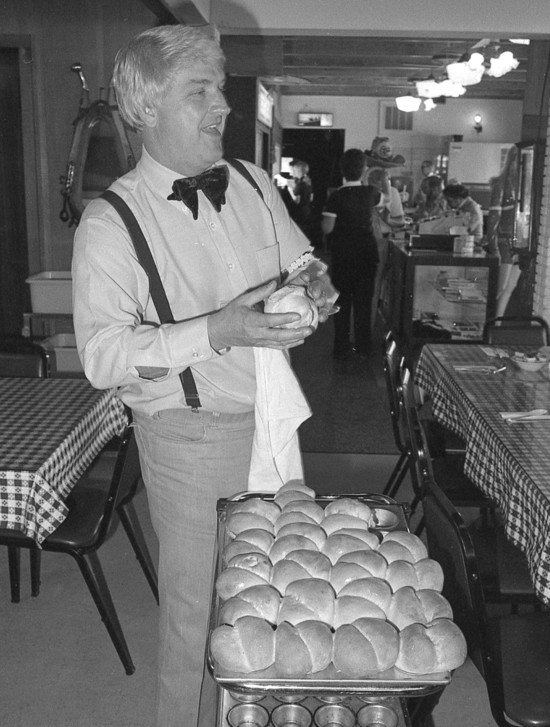 'Down home meals', roll throwing are this cafe's trademarks

When somebody asks Norman Lambert to please pass the bread, he takes them literally. Lambert throws it at them.

In fact, Lambert estimates he probably throws 200 dozen homemade rolls a day during the week and 300 dozen a day on weekends. The roll throwing and other antics--as well as the food--are the drawing powers of Lambert's Cafe, located on Old Highway 61 in Sikeston and managed by Lambert.

Lambert notes, "I started throwing rolls about four years ago when we were in our old cafe. It was too crowded one noon for me to serve the rolls to a customer and somebody yelled, 'Throw em.' So I threw them.

"So, now I do that about every noon meal and during the evenings too. The rolls are fresh, right out of the oven."

The cafe was started by his father, the late Earl Lambert. His mother, Mrs. Agnes Lambert, aunt and uncle, Ruby and Robert Lambert, still offer their culinary help.

And Lambert's wife, Mary, their sons, Todd, Scott and Pat, are also involved in the cafe operations.

"I don't really miss coaching. But I have to say that running a cafe is a lot more work," he notes.

It may be more work, but Lambert seems to thrive on pleasing people.

Clad in an outfit which includes a Derby hat in the winter, suspenders, a bow tie, jeans and a shirt with an arm guard around the sleeve, Lambert says he tries "to do people right."

"By that I mean I try to make people feel good. We make a big deal out of anniversaries, birthdays, whatever. "They're special events to somebody. We all just have a good time here."

Lambert's "hostess" is a mannequin named Norma. Depending upon the time of day, background music at Lambert's Cafe may be marching music if it's football season or country music. Whatever the tune, Lambert says, "It's always something happy and brassy."

"Nope, I can't cook at all. But our employees can. Some of them have been with us for several years, maybe 300 years," he grins.

Joking aside, Lambert's Cafe does its food right too.

Beverages--coffee, tea, milk and soda--are served in quart jars and refills are free. A variety of hot and cold vegetables, fruits, meats and desserts are prepared and served in a homestyle manner.

The rolls, of course, come through the air. Waiters often serve sliced tomatoes, deviled eggs, batter fried squash or mushrooms, potato slices and other items at no charge.

Lambert says he spends "a lot of hours" at the cafe but admits, "I'm not as dedicated as my parents. They probably worked 16 hours a day, seven days a week."

The restaurant business, like practically everything else, has been the target of inflation. A plate lunch--meat, three vegetables, rolls and beverage--sold for about 65 cents at Lambert's Cafe in the 1940s, according to Lambert.

But despite the rising costs, everybody enjoys dinner out. Lambert asserts that if homemakers were paid for the hours they spend buying food and preparing meals, "It would probably be cheaper to eat out."

He says he's witnessed an increasing number of folks dining at his restaurant. And he notes, "Located between Memphis and St. Louis, you meet a lot of interesting people and 99.9 percent of them are great. You couldn't ask for a more honest and friendly bunch that come in here.

"I know how I want to be treated, so I treat them accordingly. I guess I just enjoy people."