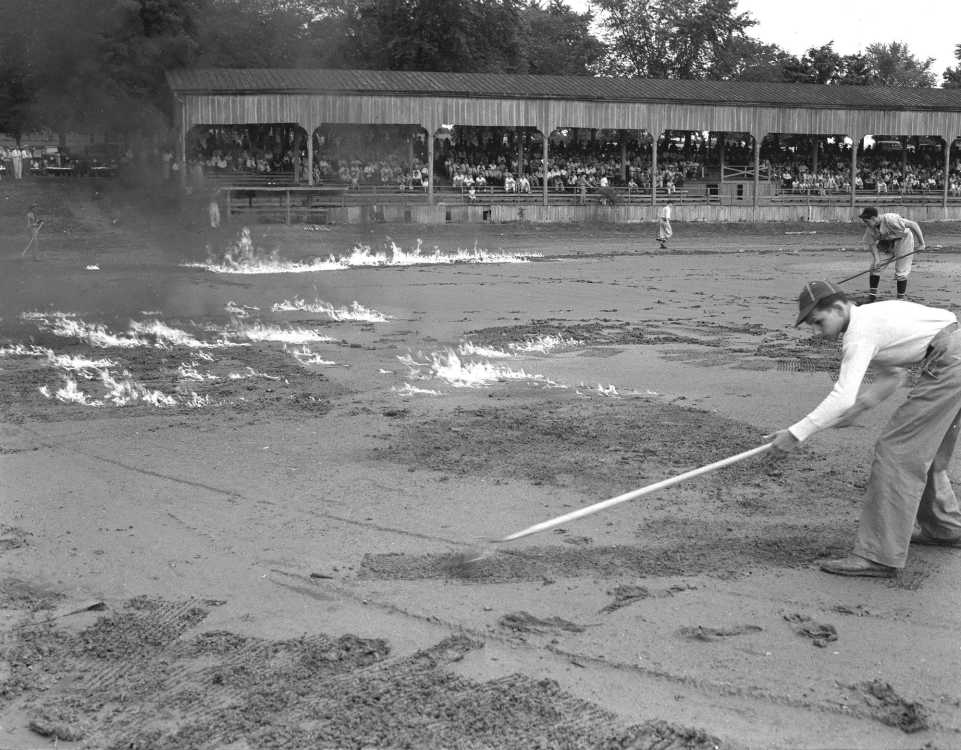 There was plenty of fireworks Sunday afternoon at Fairground Park as the Capahas outscored, 6 to 4, the Marion, Ill. Woodmen's baseball team. In the upper photo the diamond got hot as 25 gallons of gasoline, poured onto the field before the game, was ignited and it burned off leaving the field fairly dry after a forenoon shower.

In photo below, a first inning incident provided entertainment for the crowd. Shortstop John Hunze of the Capahas is shown being tagged out, between second and third bases, by third baseman Cassio of Marion, who is supported, at extreme left, by Ragain, second baseman, and big first baseman Sanders. Johnny has sent a long outfield hit, sending in two runs and had endeavored to advance to third as the ball was thrown in. Big Elam Vangilder had raced to third and stopped. Hunze got crossed up, thinking Vangilder was just coaching third base, and was caught in a run-up between the bases. (G.D. Fronabarger photos)

Playing before the largest crowd of the season, which was celebrated as Charles "Gabby" Street Day, the Capahas turned back the Marion, Ill. Modern Woodmen, 6 to 4, Sunday at Fairground Park before a paid attendance of 620 fans, although there was a much larger crowd seeing the game. The game was delayed some half hour while work was being done on the diamond, made muddy by a hard rain, but the fans were entertained by Gabby Street's talk.

Gabby Street was manager of the St. Louis Cardinals in the early 1930s. He started in baseball in 1902, later moving to the major leagues as a catcher for teams including the Cincinnati Reds, Boston Braves, Washington Senators and New York Yankees.

By 1913, due to weak hitting, he returned to the minors and played with San Francisco, Chattanooga, Nashville, Joplin, Muskogee, Okla., Augusta, Ga. Colombia, S.C. and Knoxville, Tenn.

Nicknamed "The Old Sarge," Street was the first man to catch a ball dropped from the top of the Washington monument. According to Wikipedia, on Aug. 21, 1908, after muffing the first twelve balls thrown by journalist Preston Gibson, he made a clean reception of number thirteen in his catcher's mitt from a distance of 555 feet.

Late in his career, he was a radio commentator and announced St. Louis Cardinals and Browns games, working with young colleague Harry Caray.

Street's adopted hometown of Joplin, Missouri honored him in 1950 with the dedication of Gabby Street Boulevard and Gabby Street Baseball Park. 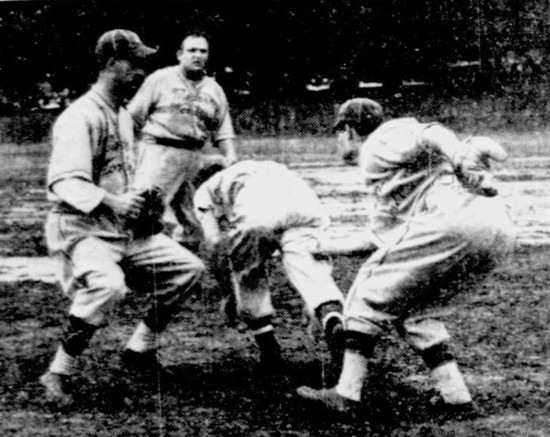