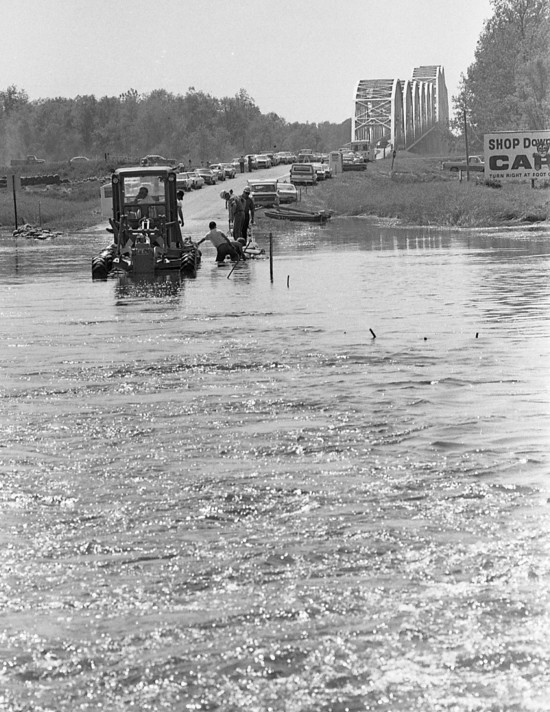 With the Mississippi River bridge leading to Cape Girardeau in background and flooded Illinois Highway 146 in foreground, volunteers place sandbags along road leading to East Cape Girardeau, Ill. Sandbagging operations aimed at ridding water from the highway just east of the bridge got underway Thursday and were continuing today. (Reginald Mitchell photo)

Volunteers for sandbagging operations in the East Cape Girardeau, Ill. area failed to show up in sufficient numbers Thursday making it a slow and arduous task for those who are involved.

The sandbagging operations, aimed at ridding water from Illinois Highway 146 just east of the Mississippi River bridge, got underway Thursday, but only about 25 volunteers, mostly women and children, reported.

The Alexander County Civil Defense had requested about 75 volunteers to help place sandbags on either side of the 1,200-foot stretch of highway so that the water could be pumped off the road and it can be reopened to traffic.

The Mississippi River here was down four-tenths of a foot, to a stage of 35 feet today, but a slow fall was forecast by the National Weather Service at Cairo, Ill., for the next three days. The river is expected to stay at the 35-foot mark Saturday and Sunday and fall only two-tenths of a foot, to 34.8 feet, on Monday.

Alexander County, Illinois, Civil Defense officials said about 50,000 sandbags would be needed to sufficiently protect both sides of Highway 146.

An amphibious vehicle called a "Duck," loaned by the Massac County Civil Defense and being operated by the State Highway Department, is the only connection most East Cape Girardeau residents have with the rest of the world.

The vehicle makes trips into the marooned East Cape Park and Terrace areas each hour throughout the day and night.

Approximately 80 families out of 130 remain in the East Cape area. 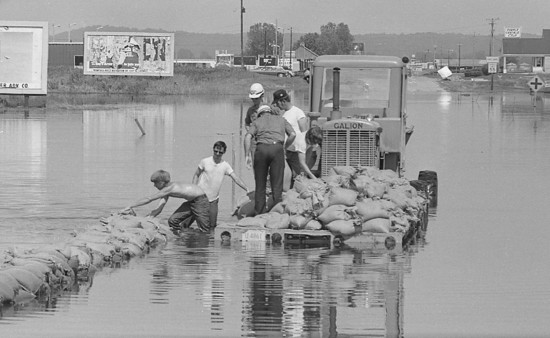 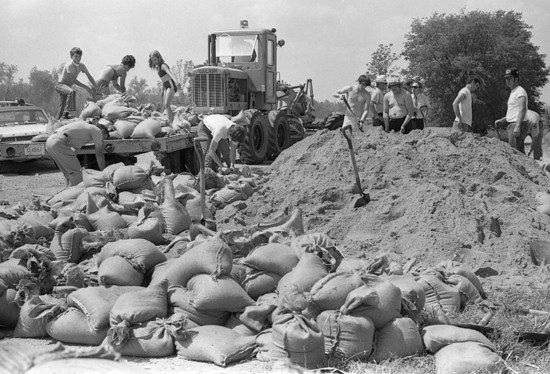