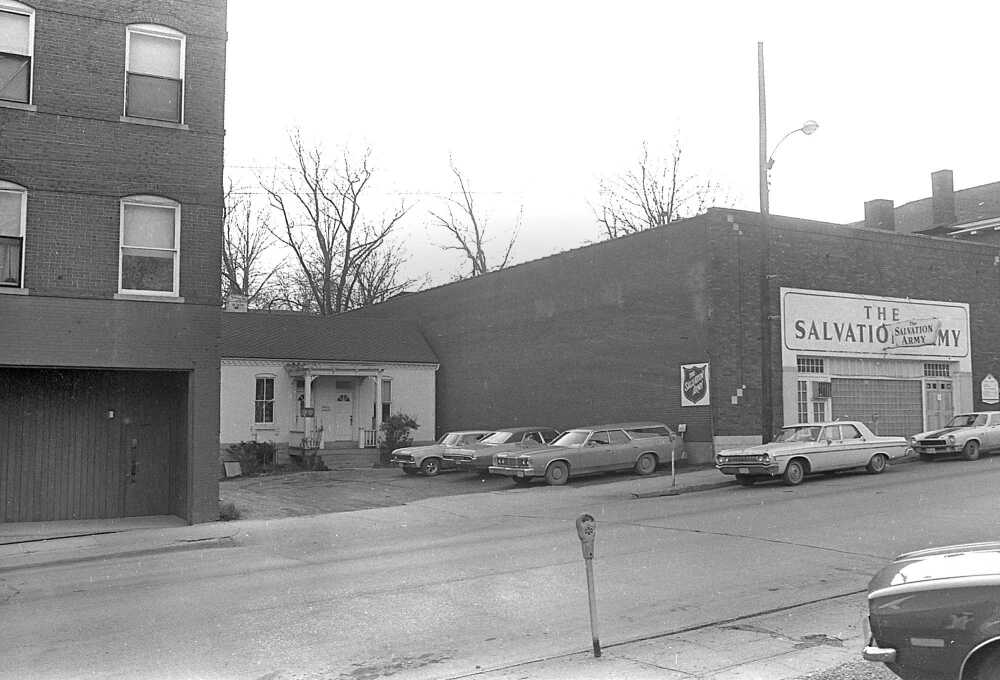 Cape Girardeau's Salvation Army is expanding into two buildings in the 200 block of Broadway that will bring all of its services into one location. The Salvation Army Citadel at the right has been in use for nearly three decades. The small white brick house in the center will become an office center while the former Cape Institutional Foods building at left will include a thrift store and a dormitory for transients.

After operating for nearly 30 years out of its citadel at 215 Broadway with its Thrift Shop across town on Good Hope, the Salvation Army has purchased two buildings immediately to the east of its church facilities to bring its services to one location.

The purchase includes a small white brick house at 211 Broadway and a 3 ½-story red brick building at 209 Broadway that formerly housed Cape Institutional Foods Inc. Off-street parking is provided in front of the house which sets back from the street between the two larger buildings.

Offices of Capt. Kenneth Sharp, the Salvation Army secretary and the Volunteer Action Center are located in the house which is currently being remodeled. The work includes new wallpaper and rugs and provides a much improved office setting over the cramped space in the church building. Capt. Sharp said an advantage of the new offices facilities is that privacy is now available to persons needing food, clothing, fuel or other financial assistance as well as those who come for counseling or to discuss other business.

The Thrift Store will be moved to the first floor of the red brick building. Partitions will be removed to allow for one large room. Walls and ceiling will be paneled, the floor carpeted and built-in clothing racks constructed around the room. Tables for loose clothing will be in the rear three-quarters of the room with furniture placed up front where the storekeeper, counter and cash register will be located, he said.

A baling room and a sorting room also will be on the first floor.

On the second floor are five apartments for rent by Army to women in need of low-cost housing. Two have been rented and qualified women interested in renting the others may contact Capt. Sharp at his office. "We will be paying taxes on the second floor," he said.

Located on the third floor will be the lodge keeper's quarters for transients and facilities for individual and family transients. There also will be an apartment for Salvation Army guests such as headquarters' officials.

Large Salvation Army decals will be placed on the windows of the building and the basement, which has a new boiler, will be used for storage.

Capt. Sharp said the buildings were purchased from Mr. and Mrs. Jesse Rutherford for a total cost of $38,500. He said there is "a $30,000 mortgage, which we feel we can pay, partly because we won't be paying rent on the Good Hope building." That rent was $225 per month, plus more than $100 monthly utilities bill.

"It won't cost us any more to operate the three-story building than it did the Good Hope building utility-wise. I know because I've received the bill," he said.

Capt. Sharp said that all church services and events will continue to be held at the citadel at 215 Broadway.

Pioneers of the Salvation Army movement first came to Cape Girardeau in 1898. For about a year, 10 different Army officers tried unsuccessfully to get the work started here and it was closed in 1899. In 1916, another attempt was made and failed, but in 1918, Maj. Mable Neal and Maj. Maud Snow established the Salvation Army Post here.

Its first headquarters were at Main and Independence and later at 120 Main. In 1945, the Salvation Army advisory board turned its thoughts toward purchasing its present citadel, then known as the Park Theater building. Erected by the Naeter Bros. in 1914, the building had been acquired by Fox Theater Co.

With expansion of its facilities, the Salvation Army has also broadened its services through the years. In 1916, the first Christmas program which developed into the Tree of Lights was held to provide baskets, toys, clothing, fuel and other items needed at the holiday season and through the winter months by needy families. Christmas kettles placed in business areas in 1954 had a slogan "Keep pots boiling."

Many services are offered throughout the year by the Army, but during its Christmas drive to help the needy, the corps turns to the general public for funds. Friday, Capt. Sharp said the Tree of Lights and direct mail appeal to date had brought in $2,998 and the kettles $1,312.59 for a total of $4,310.59. More is needed and a slogan of "Keep the pots boiling and the lights turned on" could apply.

The present location of the Salvation Army is at 701 Good Hope St.

Greyhound bus passengers left the Salvation Army citadel after spending the night after the Blizzard of 1979: