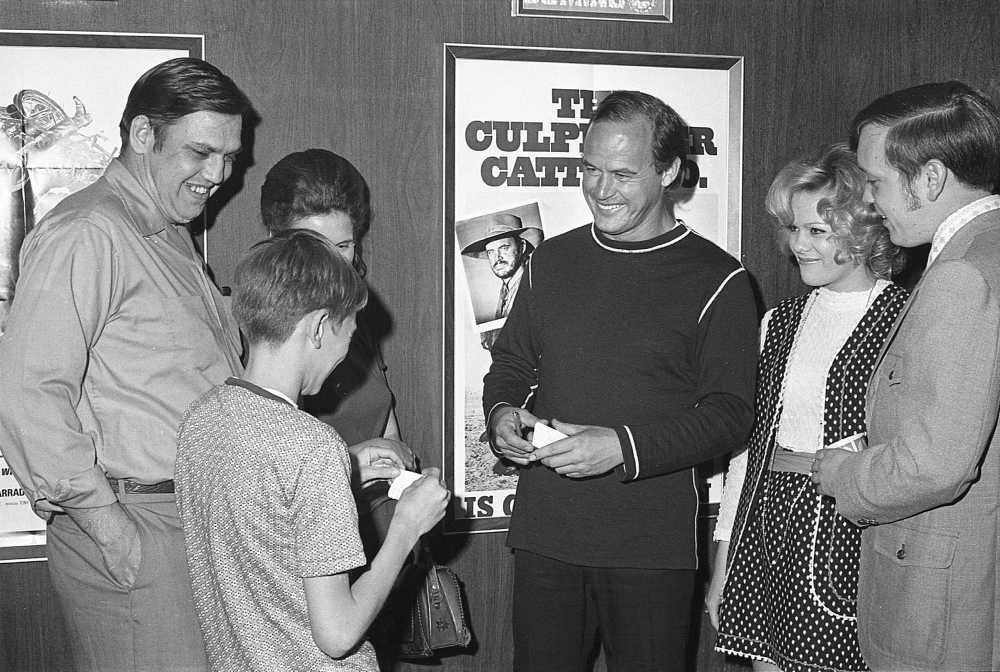 "How would you like to interview a movie star?" the boss asked.

"Wow! You bet," I drooled, dreaming of being sequestered for a few hours in a dimly lit room with a warm, meaningful female with pronounced curves and long, blonde hair.

"And have dinner with HIM," the boss added, emphasizing "him."

The bubble burst and I trekked disappointedly Monday night to the Rialto Theater where I was to meet Geoffrey Lewis who costars in "The Culpepper Cattle Co." which will premiere in this area April 13.

"I'm going to interview a guy I've never heard of," I said to myself, " and we're probably going to have dinner at the popcorn stand."

It turned out to be an enjoyable evening, especially after I discovered who Geoffrey Lewis is. He's a bad guy--in the character parts he has played in three movies and on more than a dozen television shows.

He's easily recognized in his role of a scruffy cowboy because Lewis has held this part in a number of TV westerns.

He looks a little different without the whiskers, but the same face and those eyes that seem to pierce right through you are still there--just like in the movies, as they say.

He's a nice guy to interview--probably because he doesn't take himself seriously although he is serious about performing. The hour's dinner was smooth and friendly. We were joined--at a nice restaurant--by Frestle F. Chenoweth, manager of the Rialto, and John Catan Zaro of St. Louis, branch manager of 20th Century Fox which is releasing "Culpepper."

Cape Girardeau is one of a few small cities chosen by the film maker to "premiere" the movie. Among the larger cities where the film will make its debut this month are St. Louis, Memphis and Little Rock.

Mr. Chenoweth considers 20th Century Fox interest in Cape Girardeau "a big break" for local moviegoers. "It's a first for our city, and it's the first time a movie star has been brought to Cape Girardeau for this kind of promotion," he added.

"If we do a good job with this film we will get to do it again," he said.

"I would urge all young people interested in acting as a career to pursue it," he said in the interview. "It can be rough work, but it is rewarding and highly interesting."

How rough is it--and what are the rewards?

"We spent 10 weeks in Mexico filming Culpepper," Mr. Lewis said in answering the question and promoting his new movie at the same time. He plays the leader and deadliest of a group of gunslinging cowboys.

"The scenery was beautiful and we met a lot of fine people--the crew and everybody else--that's one of the rewards. Another is being able to play someone who is interesting. I would like to be a lot of people but I can't--except as an actor.

"As for acting being rough, it was in Mexico. The temperature was around 120 degrees and the humidity was 98 percent. We sweated just by breathing. We wore the same clothes all the time too. That helped me feel the part of an authentic cowboy on the dusty cattle drive."

The co-star said he had little experience handling horses until "Culpepper" was made. "I was forced to learn how to ride a horse. I stayed in the saddle 6 to 8 hours a day."

Eating can be difficult when the exacting director insists on one take after another. There's one scene Mr. Lewis had to do several times. It involves eating a large steak and drinking beer.

"They cooked several steaks over a blowtorch. Toward the end all that steak and beer got to me," he recalled.

A 35-year-old husband and father, Mr. Lewis takes his wife and 18-months-old son on location as often as possible. The family calls Los Angeles home but the Plainfield, N.J. native is looking for a quiet country place to live.

Mr. Lewis has acted on television--in programs ranging from "Mission Impossible" to "Bonanza" and "Gunsmoke"-- for three years. He entered the film world a year ago this month and has finished three movies.

For 1 ½ years he has led a music group called the Great American Entertainment Show in which he sings, plays the drums and tells stories.

He began his acting career on the New York stage, but left for Europe when an inheritance enabled him to spend two years overseas. When he returned to the U.S., he found he was forgotten and so turned to writing and reading poetry, studying Zen and Yoga.

He ended up performing solo in small nightclubs and eventually met a guitar player who composed music for his poems. The group now consisting of five performers was eventually formed. Mr. Lewis and his companions write their own material, including songs.

"We don't want to do other people's music," he added.

The acting "bug" bit him again a few years ago and he turned to television and later movies.

Mr. Lewis said "Culpepper" is not a conventional western. "It is an excitingly different tale of the crucial passage of a youth from adolescence to young manhood," he explained.

It has no sex, but there is plenty of violence plus inspiration.

Co-starring as the teenage boy in the movie is Gary Grimes who held a lead part in "Summer of '42."

According to the Internet Movie Database, "Culpepper" was his first minor movie role before acting in "Dillinger" and then beginning a long association with Clint Eastwood, starting off with "High Plains Drifter" in 1973, "Thunderbolt and Lightfoot" in 1974, "Every Which Way But Loose" in 1978, "Any Which Way You Can" and "Bronco Billy" in 1980, "Pink Cadillac" in 1989 and "Midnight in the Garden of Good and Evil" in 1997.

Lewis was also a member of the musical/storytelling "Celestial Navigations."