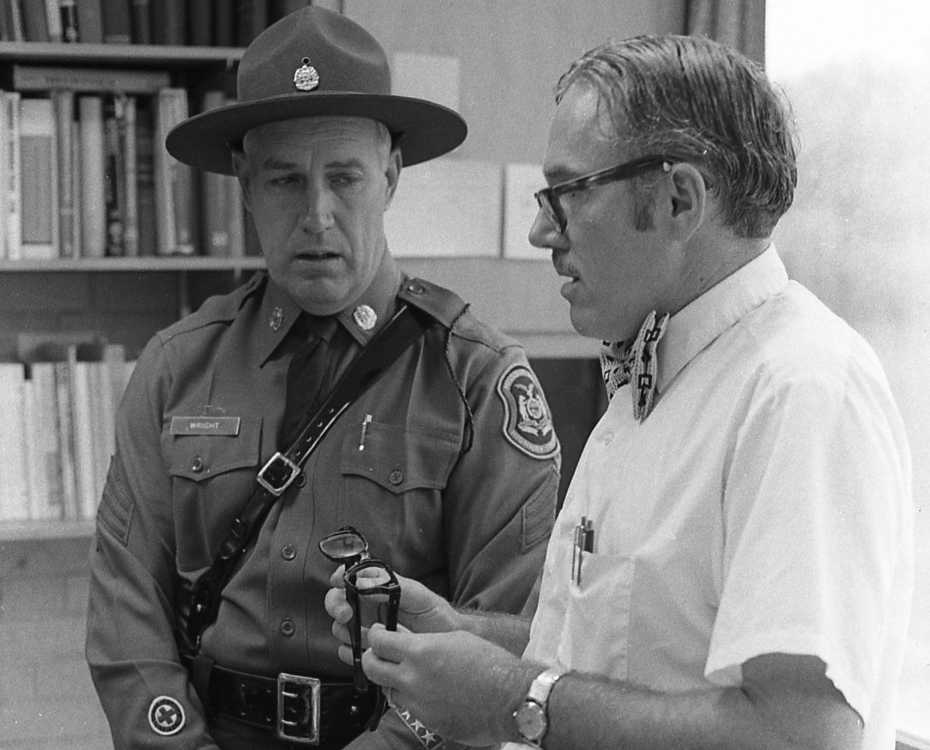 Investigation today centered around a pair of eyeglasses which were worn by Eddie Webb, 45, of Greenville, who claims he saw an unidentified flying object and was hit in the face by a ball of fire which blinded him Wednesday near Cape Girardeau. Above, principal investigators in the case, Sgt. Edwin E. Wright of the State Highway Patrol and Dr. Harley D. Rutledge, head of the SEMO State University physics department, confer Thursday as Dr. Rutledge prepared to start a series of tests on the glasses. Below are the glasses shown slightly twisted and with pit marks probably caused by some form of heat. 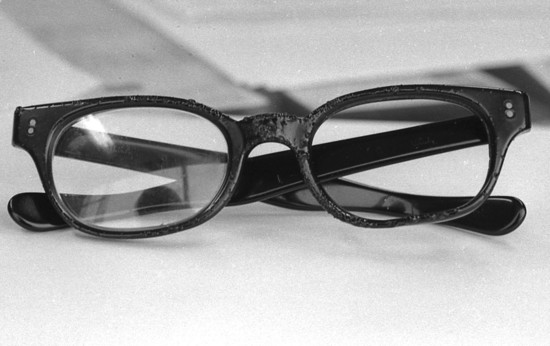 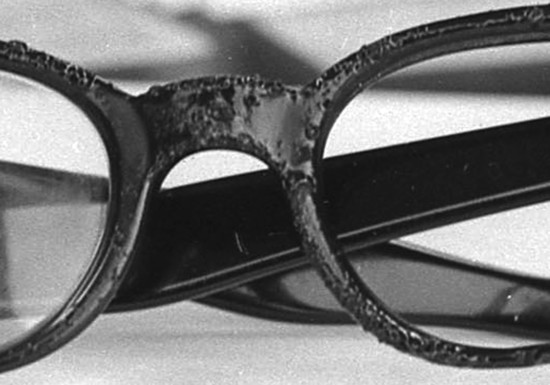 A pair of eyeglasses became the center of attention today in the story of a Greenville truck driver who claims he saw an unidentified flying object and then was hit in the face with a ball of fire which temporarily blinded him.

The eyeglasses were damaged when Eddie Webb, 45, of Greenville, a driver for Sam Tanksley Trucking Inc., of Cape Girardeau, encountered the UFO while he was driving a tractor-trailer rig on Interstate 55 just south of the Jackson exit at Wedekind Park about 6:15 or 6:30 Wednesday morning.

Dr. Harley D. Rutledge, head of the physics department at SEMO State University, said that a cursory examination of the eyeglasses briefly Thursday under a microscope and the plastic frame appeared to have been heated internally. "I was quite surprised. It doesn't look like a hoax at this point," he said.

Dr. Rutledge is director of Project Identification and with the aid of members of the Southeast Missouri Astronomy Club is continuing a scientific investigation of nocturnal lights which he began this spring in the Piedmont area.

He said that in literature on UFO sightings such burn marks as are evident on the glasses' frames are said to have been causes by sound waves of high intensity.

Mr. Webb told The Missourian Wednesday that he and his wife were in the tractor's cab heading toward Tanksley when he saw an unusual lighted object. The large turnip-shaped object covered both lanes of the interstate and appeared to have three sections--the top and bottom made of aluminum and spinning while the center section was steady and comprised of glittering red and yellow lights.

The driver said he awoke his wife who was sleeping in the cab, but she didn't see anything out of her rear view mirror. He stuck his head out the window to look behind and seconds later was blinded by a bright flash which felt "like a large ball of fire which struck me about the head and face," he said.

Mr. Webb was temporarily blinded, but later his vision began returning and he could see with blurred vision for about three feet. He was treated by a Cape Girardeau ophthalmologist, who found no damage to his eyes and was scheduled to see a specialist in St. Louis today.

"One thing which seems to substantiate Mr. Webb's story is that whatever struck his glasses did not come from directly ahead, but from slightly to the left," Dr. Rutledge said. "This is what you would expect from a person looking to the rear from a truck window."

The glasses which were melted and slightly twisted bear pit marks which Dr. Rutledge said resemble craters caused by bubbles coming from the inside of the plastic to the surface and then bursting.

He said two major tests will be made on the glasses' frames--a test for residues performed by the Law Enforcement Assistance Council Crime Lab at the university and a nuclear flourescence test for radioactivity which he will conduct.

Dr. Rutledge said he would also study the pattern of damage to the frames in detail under a microscope and test an undamaged portion of the frame to see if he can reconstruct the damage pattern.

He said the tests should be completed within three to five days.

Dr. Rutledge pointed out that there have been reports of events similar to that experienced by Mr. Webb where a ball of light has struck a person in the forehead. He also said that the turnip or top-shaped object is one of the most frequently reported shapes for UFOs along with disc and cigar shapes.

A Sept. 15 hearing on the application for Workmen's Compensation filed by a Greenville man, who claims he was injured by an unidentified flying object (UFO) near Cape Girardeau in 1973, has been canceled after a settlement was reached between the plaintiff and insurance company for his employer, Sam Tanksley Trucking Inc., here.

Amount of settlement could not be divulged since it must first be approved by Workmen's Compensation, the company said.

Eddie Webb, 47, a truck driver from Greenville, became the central figure of one of southeast Missouri's strangest UFO tales after reporting that he was burned on the face and temporarily blinded when an unidentified flying object shot a "ray" or "ball of fire" at him as he was driving his truck on Interstate 55 near here in October 1973.

Mr. Webb filed for compensation, claiming he was injured while on the job. He asked benefits to pay about $1,000 in hospital and doctor bills and compensation for the period of several weeks after the incident when he said he could not work.

In February, Edwin F. Ragland of the Missouri Division of Workmen's Compensation granted Mr. Webb's request for compensation, but later vacated the order calling for partial or temporary award. Mr. Ragland said he wanted another hearing to examine all issues involved and the Sept. 15 date was set.

The Workmen's Compensation office here said the parties involved in the case had notified the office of the settlement, which they are asking be approved.

Mr. Webb's story gained national fame and he was questioned by several top UFO investigators. Dr. Harley Rutledge, head of the physics department at SEMO State University, examined a pair of burned twisted glasses allegedly worn by Mr. Webb at the time of the incident. Dr. Rutledge said that he was able to reproduce the unusual burned effect on the glasses through use of a common highway flare, although he could not prove that Mr. Webb's story was untrue.