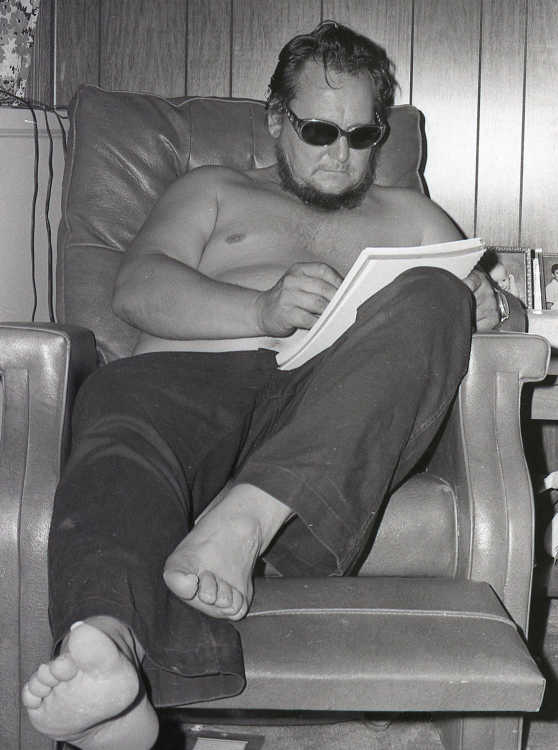 Eddie Webb of Greenville, who says he was temporarily blinded by a flash after he observed an unidentified flying object on Interstate 55 near Cape Girardeau early Wednesday, rests at his home and draws a sketch of the object he observed. He wears the dark glasses to protect his eyes from the light as he is still unable to see more than three feet, and then only with blurred vision. See his sketch below.

An encounter with an unidentified flying object near Cape Girardeau has left a Greenville truck driver shaken over what he claims he saw in the two to three minutes before unusual flashing lights disappeared.

Eddie Webb, 45, a driver for Sam Tanksley Trucking Inc. of Cape Girardeau, claims to have made contact, the hard way, with a UFO. Today he is the center of attention as UFO sightings become more widespread throughout the area.

The State Highway Patrol is holding his twisted, nearly melted pair of eyeglasses as evidence that something unusual happened, although Mr. Webb is the only one to claim that he actually saw what he thinks is a UFO.

His wife, Velma Mae, also a truck driver and who was with him when the incident occurred, says she saw nothing.

And the doctor who treated Mr. Webb says he cannot confirm any type of injuries.

But Mr. Webb sticks to his story that he was temporarily blinded and burned. His wife believes him, and the highway patrol is puzzled.

The story he relates seems fantastic, almost unbelievable, but even the UFO skeptics who have seen the glasses' frames--twisted by a hot flash of unknown origin--admit there is something to that story.

Mr. Webb gave a detailed account of the incident to The Missourian Wednesday in a telephone conversation and later in an interview at his home in a secluded wooded area near Greenville in Wayne County. Mr. Webb, relaxing at home Wednesday night in a reclining chair and wearing sunglasses, appeared exhausted and shaken by his experience.

His forehead appeared slightly red, as it had received a mild sunburn, and he complained frequently of pain which went deep inside his forehead and eyes. His sight had partially returned and he could see with blurred vision for about three feet, he said, but still flinched at bright lights.

He said his encounter with what he calls a turnip-shaped UFO with red and yellow lights in the center occurred between 6:15 and 6:30 a.m. Wednesday on Interstate 55 just south of the Jackson exit at Wedekind Park. He was driving a southbound Tanksley tractor-trailer rig. Mrs. Webb, herself a truck driver for 16 years, was beside him in the cab when he first noticed in his rearview mirror the unusual lighted object behind the truck.

Mr. Webb said the time span from when he first saw the lights behind him until he was blinded by a bright flash was only two to three minutes.

He and his wife had alternated driving from Parkersberg, W. Va., where they had picked up a load of raw plastic material packaged in 1,000-pound boxes. Mr. Webb had driven the last leg from Effingham, Ill., to the I-55 rest stop north of Fruitland, where they rested and left about 6 a.m.

About 15 minutes later, just after they had passed the Jackson exit, Mr. Webb first noticed the lights of the object, about a mile behind him. He said from this far away all he noticed was the lights, only red and yellow, glittering and mixing together.

He said the lights were about four to five feet off the ground and at first he thought it was a flatbed trailer's lights or someone running without their headlights. He said he was driving his rig about 55 or 60 miles per hour and the lights appeared to be moving three to four times as fast as he was and were rapidly gaining on him.

"When I saw the lights, I told my wife that something was coming up behind us real fast," he said. "But when she looked out her mirror she said she didn't see anything at all."

"I looked out my rearview mirror and saw them again, this time much closer," he continued.

He said he saw an object which looked like a big turnip almost behind his truck and for an instant got a glimpse of it.

"The bottom and top sections were spinning and looked like they were made from aluminum or chrome," he said in describing the object. "The center section had the lights on it and wasn't spinning, but the lights were glittering and the red and yellow seemed to mix together."

He said the object appeared to be about 30 feet in diameter, with part of it covering the other lane of the road and the other part hidden behind his truck. He said the lights were about four feet off the ground and that it must have been at least 10 feet in height.

As he got this glimpse of the object almost on the tail of his truck and ready to hit him, the truck entered a patch of fog, he said.

Mr. Webb stuck his head out the window and looked back toward the object. "I saw something which looked like a light from a spotlight come down on the tandem of the trailer and at the same time the object started to rise higher in the air," he said.

He said up to the time the object caught up with his truck, he had heard no motor noise. But as it started to rise he noticed a "humming" sound which seemed to rise in frequency as the lights rose higher.

Mr. Webb said, "I stuck my head out a little farther, looked back, and a bright white flash, like a ball of fire, hit me in the face. When the light flashed, everything stopped--the noise and all--and the lights went out."

Mrs. Webb said her husband, after looking out of the window on the driver's side of the cab, "pulled his head back in and screamed. He put his hands over his eyes and screamed that he couldn't see."

Mrs. Webb said she never saw any of the lights or heard the humming noise.

"At first I thought my truck lights had gone out so I put on the brakes and stopped in the middle of the road," Mr. Webb said. "My wife told me I was cracking up and to gel in the bunk in the cab and let her drive. It was then I realized I had gone blind."

Mrs. Webb turned a light on in the truck and looked at her husband to find his forehead red and hot as if it were blistered. One lens had fallen out of his glasses and the frame was melted and twisted.

After the truck was halted, Mrs. Webb took over and drove to the Tanksley complex on Highway 61 South, near municipal airport. She said they arrived about 6:45. An ambulance was called to the Tanksley office to take Mr. Webb to the hospital. He was given emergency treatment and a doctor examined him about 7:30. Mr. Webb was taken to the doctor's office about 8:30 where he remained most of the morning.

Mr. Webb's glasses have also been brought to the center of attention. Police who looked at the glasses said they didn't know whether the "melting and twisting" had been caused by heat or acid.

Sgt. Edwin E. Wright of the State Highway Patrol took the glasses to Poplar Bluff to have them sent to the patrol's laboratories in Jefferson City. He said, however, the glasses were to be returned to Cape Girardeau and tests would be run on them today by Dr. Harley C. Rutledge, head of the SEMO State University physics department, in an effort to determine what caused them to melt.

Dr. Rutledge has been involved during the past six months in a scientific investigation of mysterious lights and UFOs.

The Cape Girardeau doctor who examined Mr. Webb at the hospital and in his office said he ran several tests and made x-rays but could turn up no signs of burns, blindness or other injuries.

"I can confirm nothing." the opthamologist said.

Dr. John Englehart of Lutesville, the Webb's family physician, theorized that it could have been some type of laser beam which caused the glasses to be distorted.

A policeman thought it might have been gas formed by the load of plastic in the trailer. But when the trailer was checked, there was no damage to the cargo or the truck, authorities said.

Whatever it was, it wasn't a helicopter or a motor vehicle, Mr. Webb said. He added that his wife saw nothing pass them, so that whatever it was must have gone up over the top of the trailer.

He admitted that he was frightened, first when the thought something was going to run into the back of the trailer and it didn't and again when everything went black, he said.

"As far as UFOs and flying saucers are concerned, I always figured that someone who saw them either was pilled up or had been drinking," Mr. Webb said. "But I don't do either and I saw something unexplainable. So now I just don't know. I'm almost afraid to think of what I saw. I'd think someone might put me in a straightjacket."

Despite the incident, Mrs. Webb says she still does not believe in UFOs. "I never saw the lights; I didn't see anything," she said. "But I heard my husband scream and I saw his glasses. I know he was frightened and that he was in pain. I saw burns on his forehead and around his eyes.

"I was really scared," she continued. "But, I still don't believe in UFOs. I don't think there have ever been any." 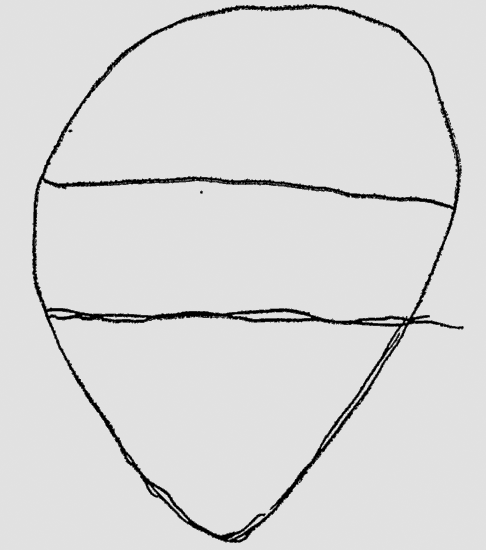 This is a sketch drawn by Eddie Webb of the unidentified flying object he observed. He said top and bottom sections were metallic and spinning, while the center section was made up of red and yellow glittering lights.