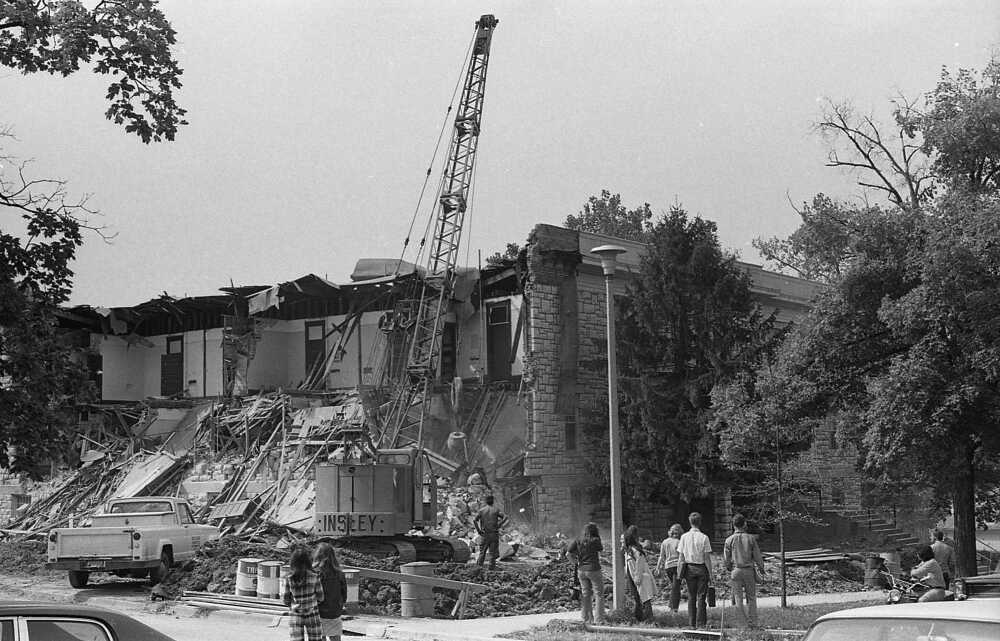 The eastern walls of old Leming Hall were the first to go when Crites and Sailer Construction Co. began demolition of the structure Wednesday to make way for a Student Union building at SEMO University. A group of interested students watch as the one-ton steel ball does the job.

The demolition of a SEMO University landmark--old Leming Hall--began Wednesday morning when a one-ton steel wrecking ball took its first blow and the structure began to tumble stone by stone.

A victim of progress, the 67-year-old building is destined to be replaced by the university with a Student Union building.

Crites and Sailer Construction Co. was awarded the contract for tearing down the building after it submitted a bid of $16,500 to the university about a month ago. The notice to start razing the building was given Sept. 27 and the company has 60 days from that date to complete the project.

A crowd of spectators was on hand most of the day as work progressed, with loud cheers often going up when a particularly resistant section of the building structure would finally give way to the wrecking ball.

Among the groups watching was a class of 24 preschool children from the university's Child Study Center in the home economics department and their teachers, Mrs. Nancy Dismang and Miss Pat Grojean.

Edward Crites, machine operator in charge of the project, said the material from the building will be hauled away to a dump site rather than salvaged.

Several persons have been inquiring about purchasing some of the stones, but salvaging them would be too expensive a task, Mr. Crites said.

The building is expected to be demolished within 10 days to two weeks. The remainder of the time will be spent in clearing away the debris before work can begin for the new Student Union.

Portions of the debris will have to be removed from the site periodically to allow the machinery to move in closer to the interior of the building, once the outside walls are down.

Leming Hall was completed in 1905 by a group of independent businessmen--Louis Houck, Leon J. Albert and M.E. Leming. It was purchased by the university on May 8, 1912, for approximately $85,000 as the first women's dormitory on campus.

The building, located at the corner of Normal and [Henderson], is of frame and masonry construction with a limestone marble exterior. It was closed following spring 1972 semester because of its age and state of disrepair. 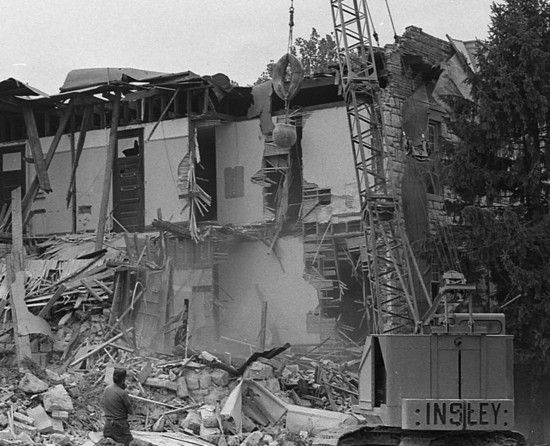