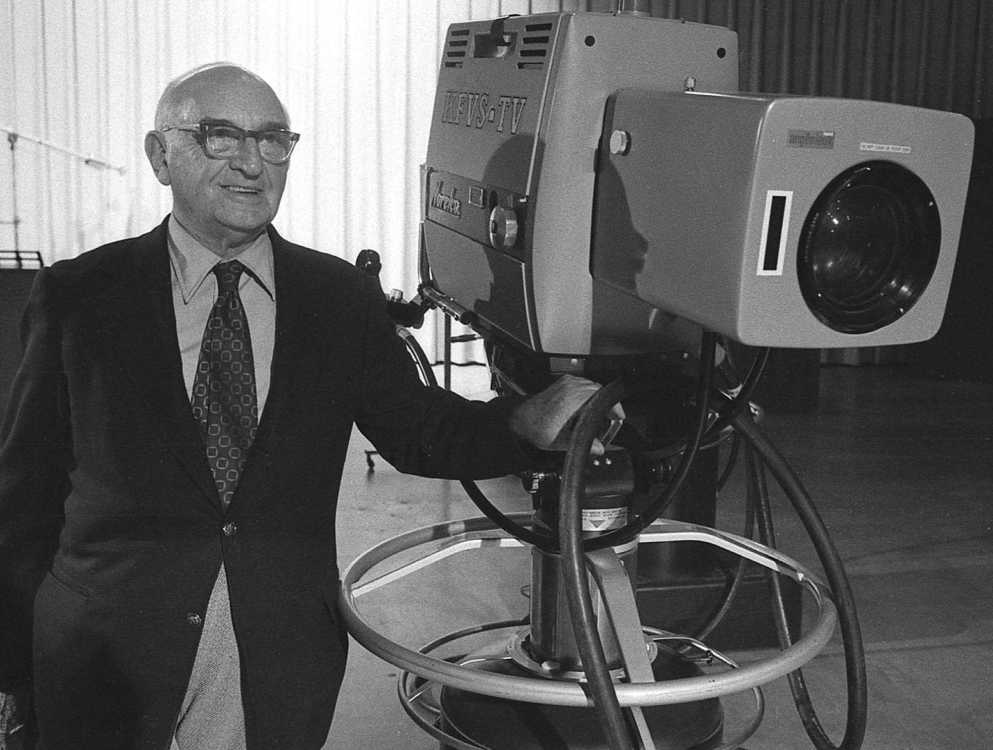 Oscar C. Hirsch, president of Hirsch Broadcasting Co., remembers the early years of radio had everything from live "neighborhood" talent to old fiddler contests. Tuesday, the pioneer area broadcaster marked his 50th year in the business. He is pictured with a television camera. (Fred Lynch photo)

From living room to Hirsch Tower

It's been a half century since a steamy July night in 1925 when Oscar C. Hirsch began broadcasts from his newly-licensed radio station in the living room of the family home at 318 South Frederick.

R.F. "Peg" Meyer, Cape Girardeau's "music man," and his orchestra were there; Mr. Hirsch handled the announcing, and a large crowd of local citizenry was on hand to witness the moment in radio history.

Continuing developments in broadcast journalism have made 50 years seem like 200 since that first broadcast, which lasted less than two hours so long distance receiving wouldn't be interfered with, but Mr. Hirsch is as enthusiastic today as he was then about the broadcast media's role in society.

Tuesday, Hirsch Broadcasting Co. here commemorated its golden anniversary on the air, and Mr. Hirsch, company president, took time out among the electronic gadgetry that fills his studios to talk about his years as a media pioneer.

Interested in the wireless and in sending and receiving messages as a boy with such friends as Erwin Knehans and David Hoche, Mr. Hirsch said his interest in the communications increased when the ill-fated luxury liner Titanic sank in 1912. "A ship 300 miles away picked up an SOS signal, but the California was in sight of the Titanic. Their wireless operator had gone to bed. Someone noticed fireworks coming from the Titanic, but thought it was to celebrate the maiden voyage. Many lives could have been saved if that operator had been awake.

Eventually, laws requiring constant monitoring of wireless sets were passed, and after serving with the signal corps during World War I, Mr. Hirsch returned to this city where for a time he built radio sets as a business.

Once KFVS was on the air, Mr. Hirsch recalls most of the talent was "live." "Neighborhood Night," as the programs were called, featured bands, quartets and "old fiddler" contests.

"You can call early radio primitive," said Mr. Hirsch, "but it gave people some of the finest programs ever heard. Music from big cities--the Kansas City Night Hawks orchestra, for example." And, Mr. Hirsch is proud to note, a number of those who performed in early years on his radio station went on to distinguish themselves in the field of music.

There have been numerous announcers for the station, too, who have gone on to disinguish themselves in various careers: Dr. Mark F. Scully, former president of SEMO State University, and the late Gustav Margraf (who played Santa at Christmas), administrative vice president of Reynolds Metal Co.

"Working with a small radio station, there's never a dull moment," Mr. Hirsch said, recalling the time promoters working for Harry S. Truman, who was then running for the Senate, were broadcasting at the station and called in the American Legion band to strike up a lively tune for prospective voters.

Television, however, and bringing it here in 1954, "is the accomplishment I'm most proud of," said the venerable Mr. Hirsch. "It's the biggest thing that ever happened to me. Television is a mirror of American life.

"But we have to remember, that television wouldn't have come into being without radio. Radio was the backbone of the whole thing."