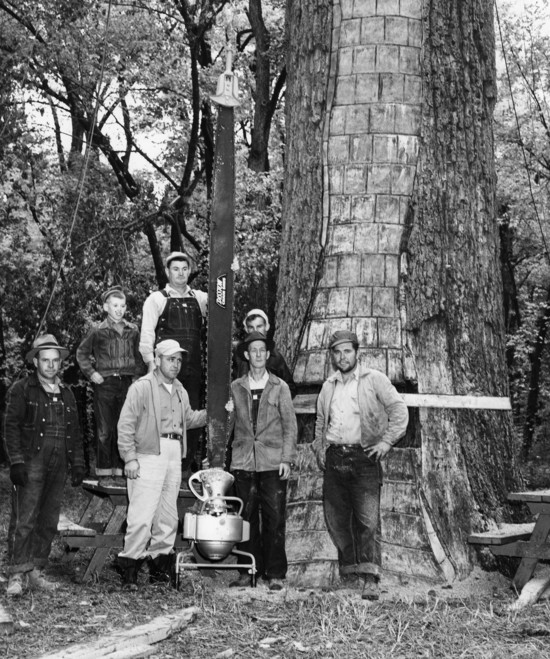 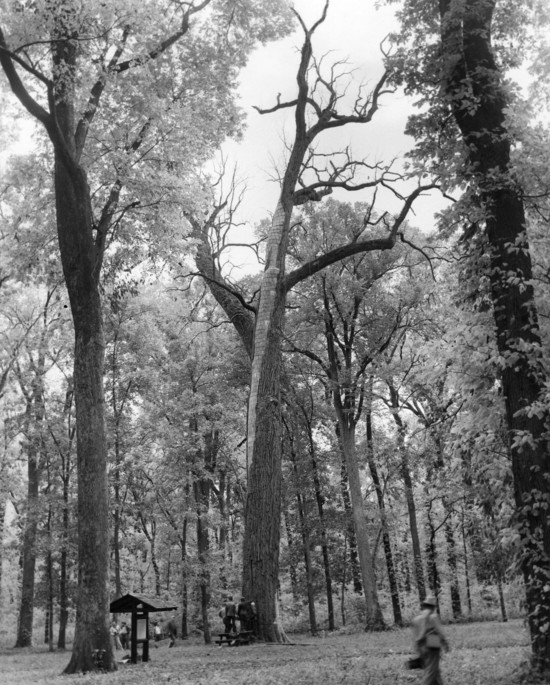 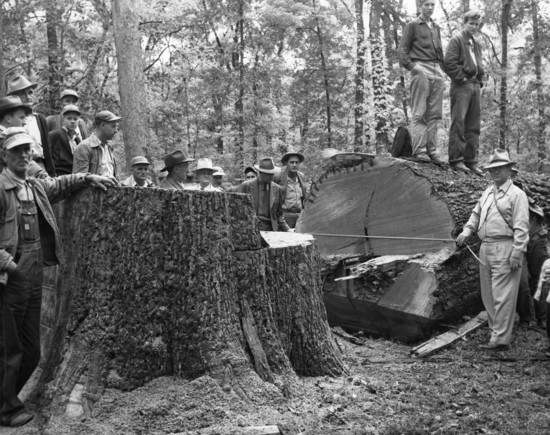 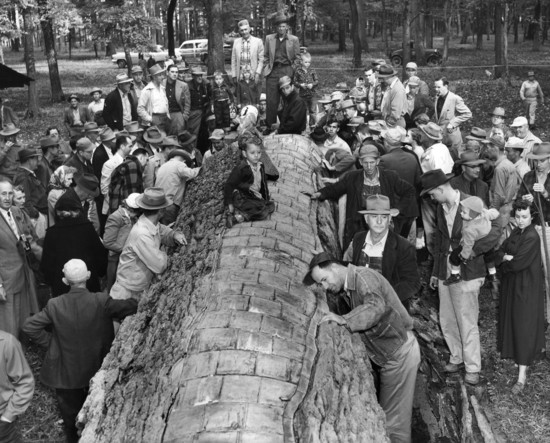 BIG OAK TREE STATE PARK--This Mississippi County state park lost its namesake Wednesday. Only a stump remains of the towering lord of the forest. The 334-year-old Burr Oak was felled as about 200 awed spectators looked on.

A State Park Department maintenance crew under direction of Austin Huston, maintenance supervisor of state parks, started the fourth and final cut precisely at 1 o'clock. After a pause while photographers snapped shots from all angles, the sawing was resumed with a 9-foot power chain saw.

At 1:23, the mighty oak began to lean, then to fall. There was a ripping, cracking sound and the tree struck the earth with a noise of a nitroglycerin explosion. The ground shook and shuddered under the feet of the bystanders. The rich, one-time swampland that spawned the giant had reclaimed its own--for the moment, at least. Experts immediately began measuring, counting and probing into the vital statistics of the dead oak. Four and a half feet above ground, where the last cut was made, the tree's diameter measured to be 6 feet 6 inches.

Roy Degler, of the state forester's office of the State Conservation Commission, counted the annual growth rings with the aid of Farm Forester Richard Holekamp of Jackson. Mr. Degler counted 334 rings. That is a rough estimate of its age, he said. Further counting would be needed to tell precisely its age, he explained.

That age would put its sprouting from a burr oak acorn (which has a diameter of about one inch) in the year 1618--the year Sir Walter Raleigh was hanged for treason in England and two years before the PIlgrims landed at Plymouth Rock.

By 1705, only 87 years after it sprouted, the big oak measured two feet through the middle. The tree took on another foot of radius in the next 117 years, making it 4 feet through the middle of 1822. It already was a giant by the time of the first New Madrid Earthquake in December, 1811. It may have been in this period that the tree got a tremendous crack in its center--a three-spoked crack that had a natural cause from strong wind, twisting, or, perhaps, an earthquake. In the last 140 years the tree took on its final growth.

The big oak was 174 years old when the city of Cape Girardeau was founded by Don Louis Lorimier in 1792.

Then it died two years ago of the "complications of old age," Mr. Degler said. "It lost its stamina and when misfortune struck it was unable to fight back." The oak lived an honorable life and earned fame. It was believed to be the largest burr oak in North America, and it had a park named for it.

Bark on the trunk amazed the spectators. It measured more than six inches thick. Many folks carried away keepsakes from the tree--pieces of the bark, a chunk of wood, a splinter or a clump of ferns that grew in the upper branches.

The trunk will be cut into eight-inch thick sections for display purposes with State College in Cape Girardeau, the University of Missouri and the state capitol receiving first considerations., Mr. Huston stated. Each of the sections is estimated to weigh about 500 pounds.

The stump will be treated with a preservative and kept in the 80-acre section of virgin timber, one of the last in Missouri. The stump will be the height of the first cut, about 3 ½ feet from the ground. The tree was cut to the center there, then a giant watermelon-slice-shaped wedge was cut out to allow the tree to lean in the direction wanted--due west. Guy wires were fastened to the tree to make sure it fell correctly to protect the onlookers watching from the east.

The park will continue to be an attraction since it boasts the biggest holly tree, the biggest shag or scaly bark hickory and biggest swamp poplar in the country, in addition to another oak that lacks but little of being as big as the Big Oak.

Among dignitaries present at the cutting were C.P. Turley of Van Buren, president of the State Park Board; Charles W. Boutin of Cape Girardeau, member of the board; Art Norman, director of recreation for the park department; Abner Gwinn, director of the department; Norvel Johnson, superintendent of the park; Judge Elgin Davis of East Prairie; M.S. Gwinn of Sikeston, district Highway Department engineer; newspaper people and others.