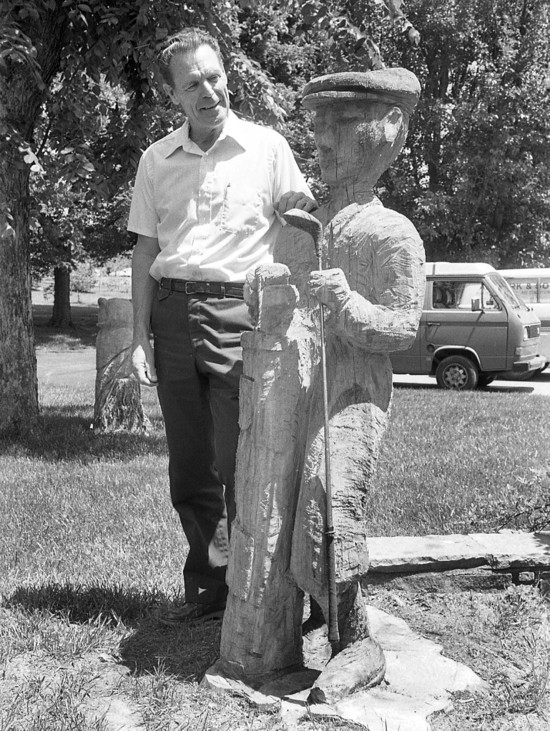 August W. Birk stands by his sculpture of a golfer made from the stump of an elm tree in his front yard. The figure has been created entirely by Birk using his chainsaws. (Fred Lynch photo)

This golfer won't be taking any wild shots

There's a golfer standing in front of 924 North Cape Rock Drive, driver in hand, looking as though he's ready to take a shot at any moment.

August Birk carved the five-foot golfer from a stump using only chainsaws. The club the wood linkster holds is an actual driver.

"I got the idea from when I've been in Grosse Pointe, Mich.," Birk said. He said that because he has been interested in art all his life--he attended an art school in Fort Wayne, Ind., and is a golfer--he wanted to try such a feat himself on one of his tree stumps.

Birk said he started on the golfer last fall. "This is a result of cutting wood for the fireplace," he said, noting that was the time his inspiration came. Bad weather postponed finishing the golfer until March.

"I just 'lit' into it," he said, adding, "I don't know if you can end up with the plan you started out with. You are limited with what you can do with a chainsaw.

"You slice with the saw to rough it out, then cut the fine lines. Then you bounce the saw across the figure, Birk said in explaining his method of "sculpting."

The bouncing of the saw gives the sculpture a smooth look--as smooth as possible using only a chainsaw--by rounding out the curves in the figure such as the shoulders, according to Birk. "If you take off too much, you'll be in trouble," Birk noted.

"I started out with two gas chainsaws," Birk said. He continued that the gas saws can be difficult to work with because, "It seems that you're always having to stop and mess with the oil and gas."

Someone suggested to Birk that he use an electric chainsaw, something he had not heard of. He got one. It does not have the power of the gas saws, but it allows one to work without stopping, Birk pointed out.

The golfer has some cracks in it as does an owl sculpture made about a year ago from another stump some 20 feet away. Birk put a wood preservative on both of his sculptures, in hopes that it will prevent more cracks from forming.

There are a number of tree stumps in Birk's neighborhood, and he has tentative plans to alter the "stumpscape" of his neighborhood where neighbors will permit.

Looking north to his neighbor's yard he pointed to a stump about five feet high and three feet wide. "Someone could really get into that one," Birk said, his eyes flashing with anticipation of another stump coming to form." 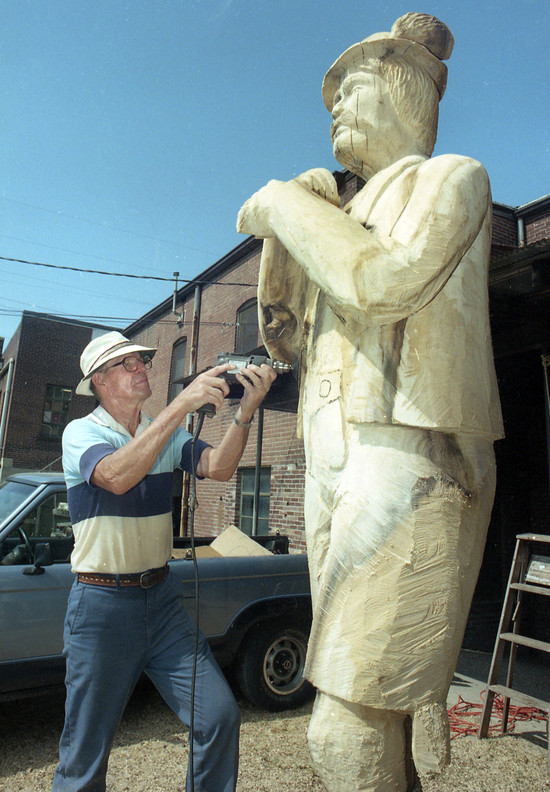 August W. Birk works on his woodcarving of a Swiss mountain man from a poplar tree trunk. An Alpine horn will be added to the finished art. (Fred Lynch photo)

For most folks, a dead tree is a hassle--something to be chopped up and hauled off.

To August W. Birk, it's a work of art waiting to happen.

The Cape Girardeau plumber-turned-sculptor has been turning stumps into statues since 1984, honing his skills with each one. His latest effort is a Swiss man blowing an Alpine horn, which will be moved to the Dr. John Holcomb home north of Cape Girardeau.

Birk, 72, also has carved golfers, St. Francis of Assisi, angels, a football player, squirrels, a newspaper boy and a variety of other figures.

The hobby began when he visited a town in northern Michigan and saw a man carving sculptures with chainsaws. Birk decided to turn his attention from merely chopping firewood to creating art.

He begins each statue by picking out an appropriate tree in someone's yard. The type of wood doesn't really matter, Birk said. Well-placed dead trees are best, because the sculptures can remain standing right where they are.

Other sculptures come from free-standing pieces of wood.

Birk draws a life-size sketch of the proposed sculpture on a piece of cardboard. He builds scaffolding around the trunk, then starts working from the top.

Big cuts are made with a chainsaw and the detail work done with a power sander and small power tools with various attachments. By the end, the wood is smooth and free of splinters. Birk covers it with sealant or perhaps some stain and encourages his customers to put on two coats of weatherproofer a year.

Chainsaw carving is a tricky job--one false move and a statue may lose an appendage. Nothing so dramatic has happened so far, but Birk said he makes the occasional mistake.

"Nine out of 10 times I don't leave enough wood for the nose," he said. "Many of my statues end up with short noses, but they aren't too noticeable."

Some problems with statues have to do with the wood, because Birk doesn't know what's inside until he starts in with a chainsaw. There may be knots on his statue's face or rotted portions in its middle. The artist had to fill one statue with insulation and block holes with wood carvings.

Despite the inherent problems in chainsaw sculpting, people like the results. Birk gave away his work for years. Customers didn't lose interest when he started charging, and Birk keeps a constant waiting list.

Being paid for his artwork is the fulfillment of a dream for the one-time plumber. It began when Birk was a young man in high school. He took all the art classes he could, then graduated and became a pilot in the Air Force.

When his tour of duty ended, Birk's father expected him to join the family plumbing and heating business. The young veteran convinced his father to let him take advantage of the G.I. Bill and attend school at the University of Missouri-Columbia.

He took art classes there for years, then transferred for one semester to the Fort Wayne Art School in Indiana to be closer to his fiancee, Patricia. After graduation, Birk married her and moved back to Missouri to join the plumbing business.

"Art was thrown to the side," Birk said. "I had three young daughters to feed."

His years away from art didn't hurt his talent. Today, he does wood relief carvings and small pieces in addition to his large sculptures.

Stories about Birk's life will be published in the book, "All That I Am And More." His children encouraged him to write it and include information about the Birk family geneology.

"As I saw my seven grandchildren coming along and was able to talk to them, I find life is so much different now than when I was their age," Birk said. "I want them to know about life then."

Don't look for the book in stores. Copies will be given away as Christmas presents for family and friends.

A copy of the book may be viewed in the geneology room at the Cape Girardeau Public Library.

Here is a link to the story about the book: 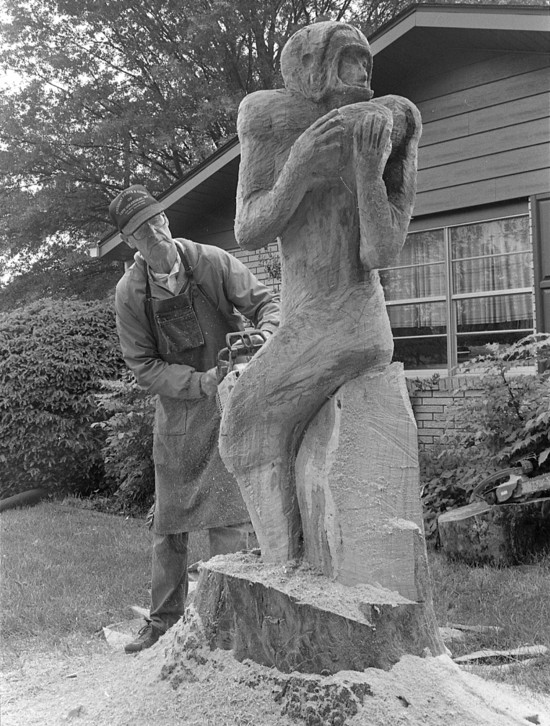 Just give August W. Birk a tree trunk and he'll turn it into art with a chainsaw. Charles H. Brune asked Birk to do something with the yellow birch tree at his residence. Birk knew of the Brune family's interest in football, and he found a statue to use as a model. So the tree that had been a nuisance in the yard will help to recall football memories for the Brunes. (Fred Lynch photo) 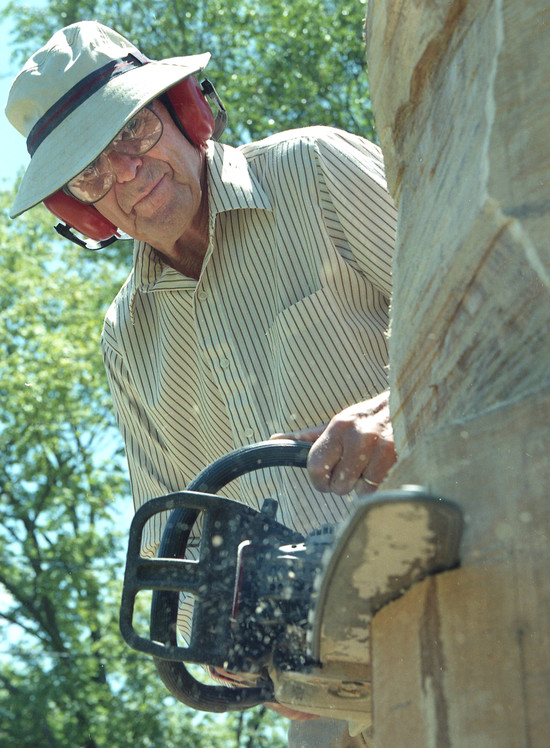 August Birk began his latest wood sculpture in Cape Girardeau during the final week of June, starting with the remains of an oak tree located on the corner of Themis Street and Louisiana Avenue at Franklin Elementary School.

When a school official asked him to create a sculpture in Ben Franklin's likeness, Birk spent months researching what the statesman looked like. He scoured libraries and history books for other artists' images of the man before creating his own piece. (Jason Easterly photo)