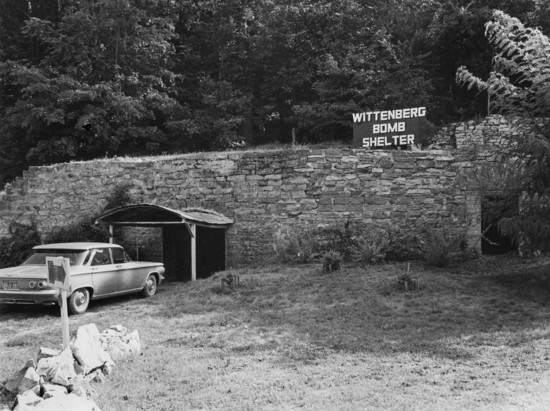 This photograph was published in the Southeast Missourian on Oct. 7, 1966 with a story announcing the dedication of a new river ferry service between Wittenberg, Missouri and Grand Tower, Illinois. Here is an excerpt:

Leaving the ferry, it is but a short drive by automobile to this historic old town of Wittenberg. Once a flourishing trade center, the town has withered and died, and only a few people remain to call it home. But much history has been made here and the town still has a definite claim, which is one of the most unique bomb shelters of its type throughout the country.

Major portion of the shelter consists of three rooms, each large enough to accommodate several hundred persons. The walls and roof are made of stone bricks said to have been carved by hand from surrounding hills. The roof has been an architectural masterpiece from the time it was built, constructed of a nearly perfect arch with two ventilation shafts. Another portion of the shelter is a man-made cave carved out of solid rock. This part is damp and stalagmites of ice reach upward from the floor. 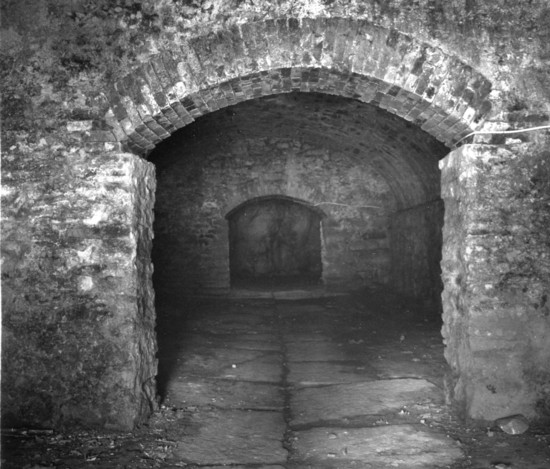 The entrance to the former brewery in Wittenberg, Missouri was photographed in 1971. (Steve Robertson photo)