The Beanery at Scott City 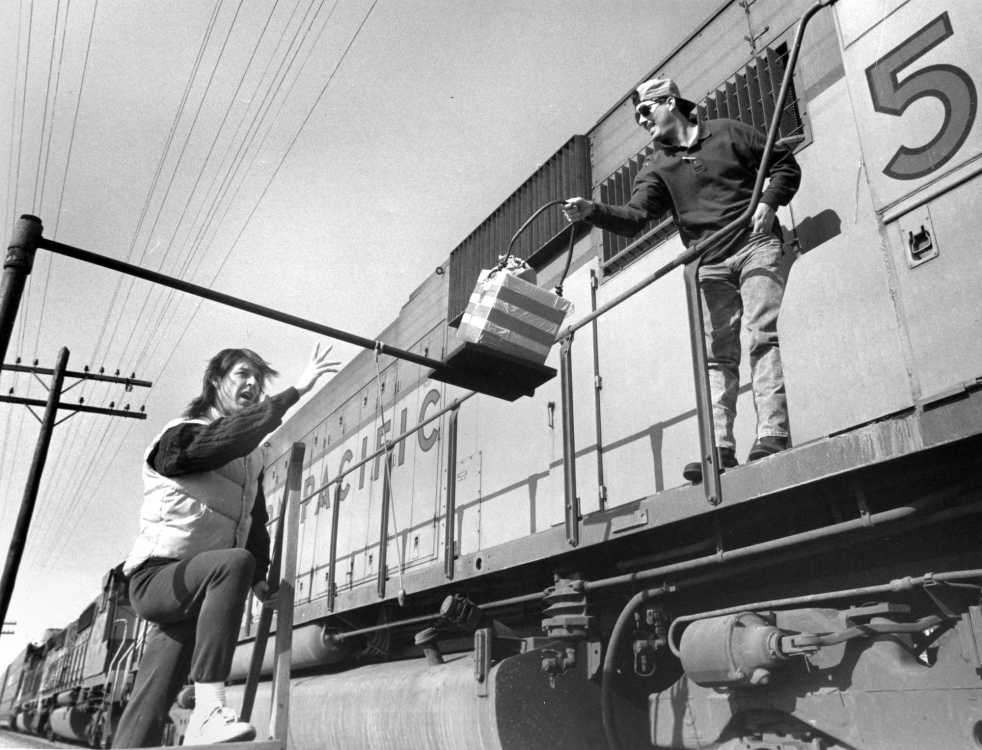 SCOTT CITY, Mo. (AP) _ There are no waitresses at the Ill-Mo Beanery - no tables, no menus, no maitre d'.

Come to think of it, there's not even a sign outside the small white house next to the First Free Will Baptist Church on the edge of the tracks. Unless you count ''Private Property, No Trespassing.''

Then again, this isn't your ordinary cafe.

''We don't need a sign or any of those things,'' said co-owner Bob Camp. ''We don't feed anyone else but trains.''

About once an hour, a Union Pacific freight train rolls through this small southeastern Missouri town near the Illinois border, and the crews - the Beanery's only customers - are always hungry.

But they're well out of town before they get a chance to dig in. Because there are schedules to keep, they just slow the train to 15-20 mph and scoop up the care packages left hanging on a hook.

Orders come in by citizen's band, as does notification that the locomotive is getting close to the pickup zone: ''CHDAZ, coming up the hill.''

The handoff is rarely botched, although there was one spectacular failure. About 20 years ago, a hobo riding the rails 15 cars ahead of the caboose swiped the food.

''There wasn't anything the conductor could do about it,'' Camp said.

The Beanery was opened in 1949 when the railroad closed the crew-change point at Gale, Ill., across the Mississippi River from Scott City, about 105 miles south of St. Louis.

The restaurant serves crews making the 190-mile trip from Dupo, Ill., to Poplar Bluff, Mo., and the 199-mile journey from Poplar Bluff to Salem, Ill. The trips may not sound long, but they can take as long as 12 hours depending on traffic and the number of stops.

The railroad picks up the tab for the food-on-the-go.

Oh yes, there's another thing missing from the Beanery: A cash register. No money changes hands inside.

The atmosphere inside the Beanery, which operates around the clock, is decidedly low-tech. The compressor of an old refrigerator rattles constantly, the linoleum is cracked and yellowed and an exhaust fan adds to the din in the dimly lit building. A microwave is a recent addition.

It's not much to see, but then again none of the customers ever steps inside.

Camp, 64, a grizzled man with long sideburns, was a clerk for Union Pacific for 43 years before retiring in 1988. He's been co-owner of the Beanery for 25 years with B.L. Wheeler, a retired engineer.

Name it, within reason, and Camp's crew can fix it. But the most popular item is coffee.

Engineer Dick Mopin is one satisfied customer. Mopin, 50, of Poplar Bluff, has worked for Union Pacific for 30 years, so that means 30 years of breakfasts, lunches and dinners from the Beanery.

And he's not tired of it, even though many times he'll eat 10 Beanery meals a week. Good thing he can order 18 different sandwiches on four types of breads.