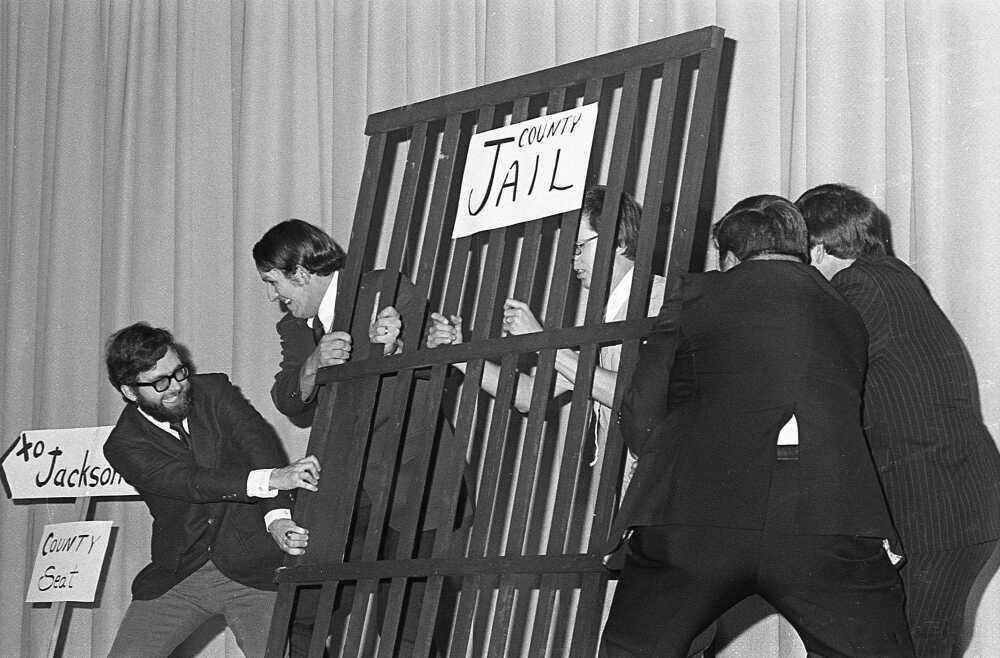 Fun and games over the county jail

They may not have arrived at any solution, but Jaycees Friday night poked a lot of fun at the long-standing controversy over the site of a county jail. Here opposing forces pull the "jail" in opposite directions, toward Jackson on the left, and Cape Girardeau on the right. The "actors" in the performance, part of the Jaycee Follies which continue tonight at Central High School auditorium, are, from left, Cliff Shirrell, Robert W. Fogler, James L. Hendrickson (behind bars), Associate County Judge J. Ronald Fischer and Bradshaw Smith, Cape Girardeau City Councilman. Oh, yes. The setting was "1993. Still Battling for the County Jail." (Fred Lynch photo)

A long-awaited county jail will be built in its entirety as a result of action taken Thursday by Cape County Court.

In moving to award contracts, the court changed its earlier announced decision to award electrical work to Hervey Electric Co. of St. Louis.

Instead, Jackson Electric Co., which had threatened to sue the court if it was not awarded the work, was selected.

The court had said earlier it would award contracts on the basis of lowest base bids, but because it was decided Thursday to contract for all add alternates, the court said it was switching its decision to award the electrical work to Hervey.

Whether the jail could be built in its entirety was questionable until the court learned that the Federal Revenue-Sharing Program was extended through the end of 1977.

The architect prepared plans on basic construction of a one-story jail along with additional construction in the form of add alternates.

The add alternates include the second level offices for the sheriff, completion of 12 cells in a wing which otherwise would be in dormitory form, a passenger elevator, installation of kitchen equipment, security fencing, a drunk tank, a morgue, a padded cell, paving of a parking lot, and painting the first level....

Construction of the jail will follow more than three years of squabbling and legal battles over sites.