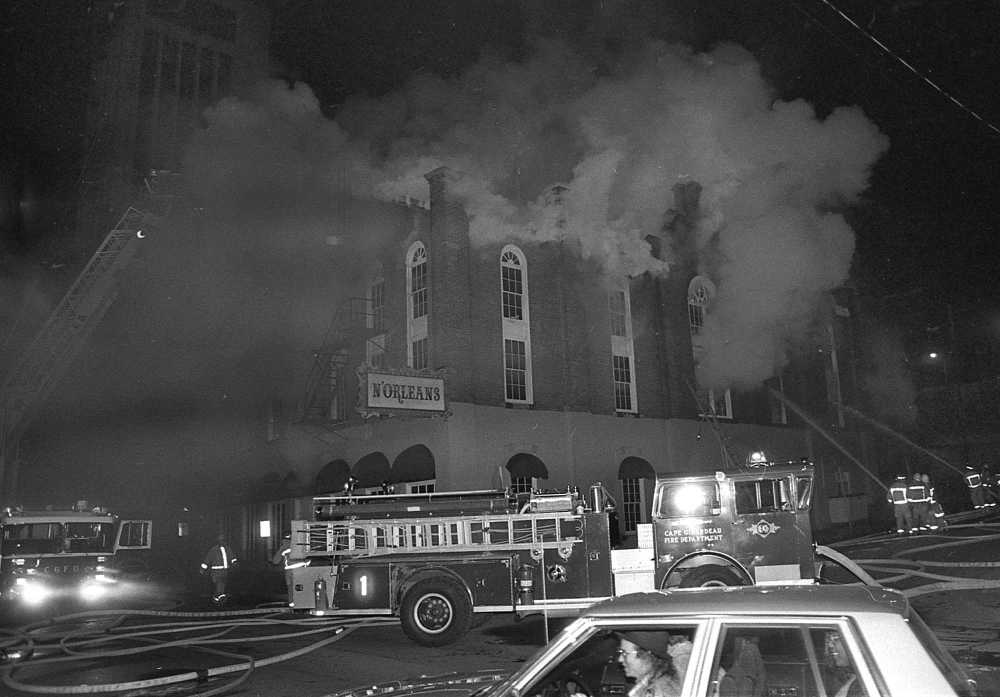 Smoke billows from the Royal N'Orleans restaurant early this morning as Cape Girardeau firefighters battle the fire which destroyed all but the exterior brick walls of the structure. The fire was discovered at 12:30 a.m. by a passing motorist who contacted authorities. The building, also called the Old Opera House, was built in 1868. (David Hente photo)

A part of Cape Girardeau's heritage died early today when fire swept through the city's Old Opera House, which was built in 1868.

The building, which housed the Royal N'Orleans restaurant at Broadway and Lorimier, has been termed a total loss, as was its contents.

At the scene this morning, Dennis Stockard, owner of the building, said, "We'll rebuild." He expressed hope that the building can be saved.

"We'd like to keep the building as it is on the outside," he said.

"These walls are four to five bricks thick," said Stockard, who renovated the three-story brick and wood building within the past year. "We'll have a structural engineer to inspect the walls early next week."

Stockard, who said the building was covered by insurance, declined to put a value on the building.

"How can you put a value on a building like that?" he said.

The fire is believed to have started in a utility room behind the kitchen area, on the Lorimier Street side of the building.

Fire officials said a faulty flue pipe from a gas water heater ignited wall paneling between the kitchen and the utility room. The fire then spread into the kitchen area and burned through the second and third floors.

It was the third major fire in downtown Cape Girardeau since June; in June fire destroyed an old building that housed Uncle Ralph's Furniture at Independence and Spanish and in July fire destroyed the old Idan-Ha Hotel at Broadway and Fountain.

The N'Orleans fire was discovered about 12:30 a.m. by a passing motorist who stopped Lt. Ed Barker of the Cape Girardeau Police Department several blocks away.

Barker said when he arrived, he could see thick, brown smoke completely engulfing the building, with flames shooting out second-floor Lorimier Street windows.

Assistant Fire Chief Paul Kesterson was one of the first to arrive at the scene.

"There was heavy, dark smoke coming out from the second-floor windows," he said. "There was no fire in the first-floor dining area.

Ten minutes after the initial arrival of firefighters, Kesterson ordered a second alarm.

Kesterson ordered a brief interior attack of the fire through a side door in the vicinity of the kitchen area, but quickly withdrew his men because of danger of falling debris.

He explained that by that time, the fire had already spread to the second-floor area and ignited the 16-inch wooden beams that hold the wooden floors to the brick wall.

"I was afraid the floor and beams would collapse," said Kesterson. "The building was already too far gone, and it wasn't worth the risk of endangering the men's lives to send them inside."

Kesterson said he believed the historic building was as well as gone about 15 minutes after he arrived.

"It had too much of a head start on us," he said. "When we first started putting water on the fire after we arrived, the smoke changed to a lighter color. But then we pushed the fire back inside the interior of the building, where we couldn't get to it with water.

"That's when I knew it was all over with. It was tinder dry in there. The wood was over 100 years old. There was no fire alarm or sprinkler system."

Kesterson said firefighters were also hampered by a new galvanized roof that was put on the building as part of the renovation last summer. Firefighters were unable to ventilate the roof and get water onto the fire below, he said.

Only when sections of the roof collapsed about 2:30 a.m., after the wooden support beams had burned away, were they able to get enough water inside the building to halt its progress toward the front.

By that time, the fire had consumed nearly all of the northern half of the building, leaving only the brick walls standing.

Kesterson said a stiff southerly wind during the fire proved to be a blessing to firefighters. He said the wind carried the flames and hot gases to the north, over the KFVS-TV parking lot, and away from the adjoining KFVS-TV building and the Southeast Missourian building, which is across the street, on the south side of Broadway.

Kesterson said the fire may have had up to a 45-minute head start.

As a precaution, police have closed off the 300 block of Broadway and Lorimier Street, from Broadway north to Bellevue.

Fire officials are worried the weakened brick walls on the south and east sides of the gutted building may collapse without warning.

Kesterson said a building inspector will examine the building today to determine if the walls are safe.

Because of the late hour, there were few onlookers when firefighters arrived. But as word of the nature of the fire spread, dozens of people gathered at the southeast corner of Broadway and Lorimier to watch as the flames slowly worked their way through the building during a nearly three-hour period.

A moderate rainfall that started around 2:15 a.m. finally sent most of them to their homes, leaving only firefighters, police officers and news media people at the scene.

After the fire was brought under control, weary firefighters walked over to the Salvation Army's emergency services canteen for a cup of coffee and some cookies, and took a minute or two to relax before the cooling down and cleaning up operations began.

The Old Opera House, as it has been known in the city for 119 years, was built by the German Turner Society. At that time, it was called Turner Hall.

Turner Societies, or Turnvereins, were organizations of German immigrants and specialized in gymnastics exercises and other recreational activities.

Many of the members of the society were artisans, such as brickmasons and carpenters.

The building was part of a Civil War reconstruction program, and was used as a social center for various kinds of gatherings.

Prior to being built, the site contained the city's first tavern, which was built in 1806 by Capt. William Ogle.

Later, two schools were built on the site; the Cape Girardeau Academy in 1843, and the Washington Female Seminary in 1849.

For many years, the Old Opera House was the social center of Cape Girardeau and the scene of parties, dances, weddings, election rallies, beer busts, minstrels, operas, melodramas, wrestling and boxing matches.

Most of the events were held on the second floor where there was a large stage.

A unique feature of the second-floor hall was a removable wall behind the stage that permitted the audience to sit in a terrace beer garden and view the shows on hot summer evenings.

In 1888, the Masonic Lodge purchased the building from the Turner Society for $3,000.

Because of the noise and interference of rehearsals and performances of theatrical troupes, the Masons eventually built a new temple one block away, at the corner of Broadway and Spanish.

In later years, the Old Opera House was the scene of movies and other forms of entertainment.

As the years passed, its importance in the community began to decline.

In 1904, the first issues of The Daily Republican were printed by the Naeter Brothers, founders of the Southeast Missourian, in the southwest corner of the lower level of the building. The newspaper was asked to move because noise from the press interfered with the second-floor performances.

In the late 1940s, the building was among several historic sites in the city to be recognized. In 1951, a historic plaque was placed on the building by the Cape Girardeau Rotary Club.

As Turner Hall, the building had been recognized and admired by architects and builders for its typically German style of architecture.

The building's New Orleans French Quarter appearance was added in 1955.

But recognition did not always mean preservation.

In the 1950s, First Federal Savings and Loan announced plans to raze the historic building and use the site for a parking lot.

The building was saved when the late Richard Barnhouse purchased the building and restored it to much of its former grandeur.

Barnhouse established the building's French architecture, which is reminiscent of buildings in New Orleans' French Quarter. Barnhouse also established and operated a restaurant that specialized in New Orleans-style French cuisine.

At one time, its wine cellars were said to be the largest between St. Louis and Memphis.

Following the deaths of Barnhouse and his wife, the building was purchased by Dennis Stockard, owner of DeJoy's Inc. The firm owns and operates restaurants in Missouri and the Midwest.

Last year plans were announced for a Royal N'Orleans Renovation Dinner Club, with proceeds going to a special fund for the restoration and remodeling of the building. 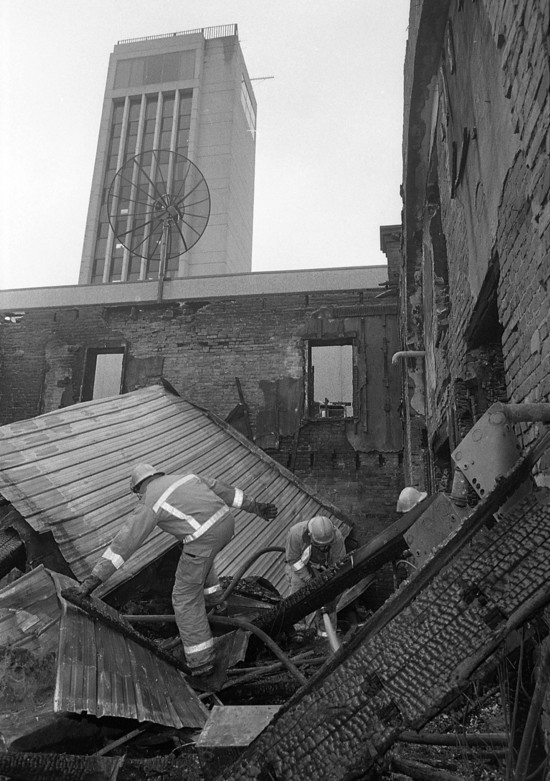 Searching through the rubble

Cape Girardeau firefighters search through the rubble Thursday, March 8, 1990, following a fire at the Royal N'Orleans restaurant. Firefighters said the building was a total loss. The owner of the historic structure, Dennis Stockard, said he hopes to rebuild. (Fred Lynch photo)

The Royal N'Orleans restaurant was rebuilt and reopened for business less than a year after the fire gutted the building.

The building is presently occupied by Katy O'Ferrell's Publick House.