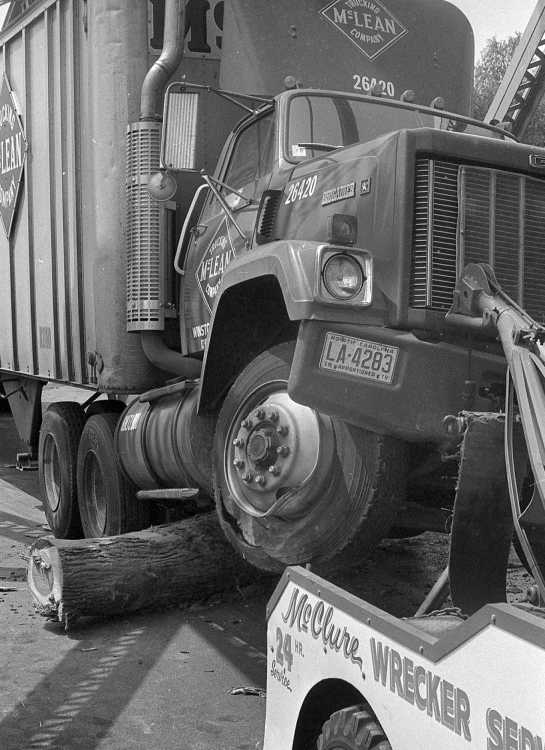 A tractor trailer cab straddles one of several logs that tumbled from a Jackson sawmill truck on the Illinois side of the Mississippi River bridge Monday afternoon. The logs were jarred loose when the westbound P and K Sawmill truck's load struck the first bridge post. The eastbound tractor trailer, owned by McLean Trucking Co. of Winston-Salem, N.C., was unable to stop before colliding with the logs. (Fred Lynch photos) 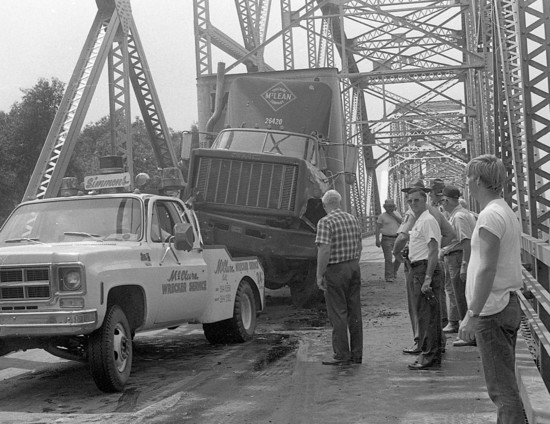 The driver of a tractor trailer narrowly missed being injured when his rig ran over several logs that had tumbled off a Jackson sawmill truck on the Illinois side of the Mississippi River bridge Monday afternoon.

One of the tractor trailer's diesel fuel tanks was ruptured, leaking fuel on the bridge. The bridge was closed to traffic for about 1 ½ hours. The accident occurred about 1 p.m. when a P and K Sawmill truck's load struck the first bridge post as it entered the bridge toward Cape Girardeau from Illinois, knocking several logs loose.

An approaching eastbound McLean Trucking Co. tractor trailer was unable to avoid the logs as they tumbled toward his vehicle. "It just looked like they exploded off that thing, the way they flew up in the air," truck driver Charles E. Birdwell, 50, of Nashville, Tenn., said. "I thought they were going to hit the windshield."

Mr. Birdwell said four logs hit the empty tractor trailer, which came to rest with the cab straddling one of the logs. Neither driver was injured. The sawmill truck was driven by Tommy L. Hankins, 22, of Jackson.

Illinois State Police were assisted by the Cape Girardeau Police and Fire Department in cleaning up after the accident. Mike Hill, a McClure, Ill. man who happened to be on the bridge at the time of the accident, offered his assistance in pulling the logs from under the tractor trailer. Bill Simmons, operator of a McClure wrecking service, pulled the disabled tractor trailer from the bridge.

Traffic on both sides of the bridge was delayed for about 1 ½ hours and in Illinois was backed up to Route 3. 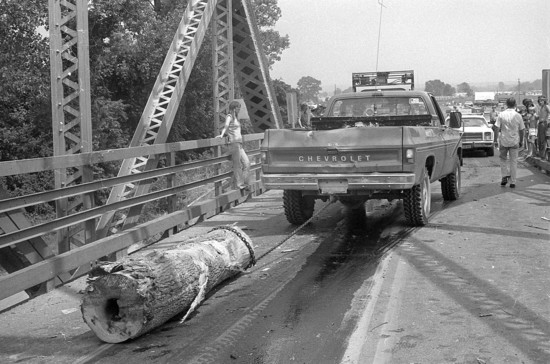 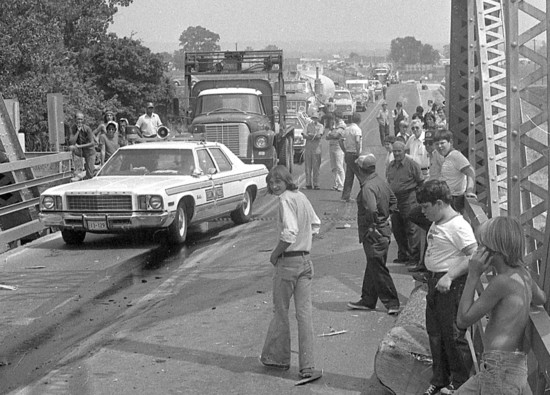 Chris Foeste responded to the second photo above:

The gentlemen in the white t-shirt in the right foreground is Mike Foeste, my father. Kudos goes out to my mother over Easter weekend spotting my dad in this picture. My father then recounted this as one of the scariest events that he had been in due to being about 150 ft on the bridge when he saw the logs start falling off and wedging between the beams.

Logging on the river