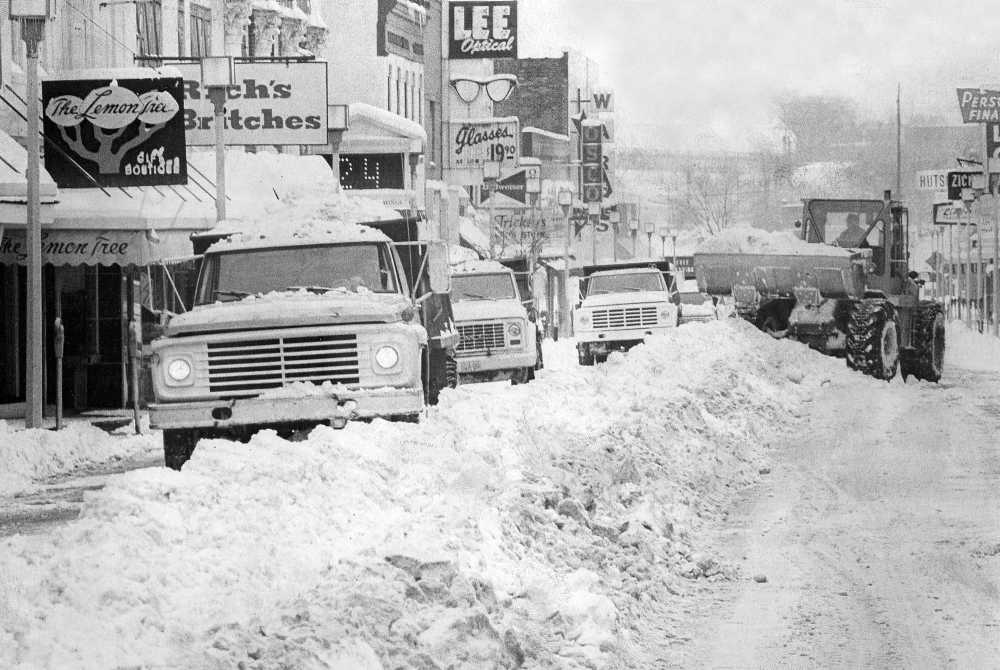 A year before the Blizzard of 1979 produced a record two feet of snow in Cape Girardeau, the city recorded 15 inches of snow Jan. 15-16, 1978. That blizzard rivaled a record snowfall in 1917. This picture shows the cleanup operation on Main Street looking south toward the bridge.

Last year on Jan. 9 football fans watched their TV sets while a winter blizzard howled outside, dumping 10 inches of snow atop three inches which fell three days before.

Sunday, the snow didn't begin until evening. Flurries were seen about 7 p.m., but it wasn't until early this morning that the storm really pummeled the region.

By 9 a.m. the Federal Aviation Flight Service at the Cape Girardeau Municipal Airport reported six inches of snow on the ground. The temperature was 27 degrees, a far cry from last year's zero and sub-zero readings.

School cancellations were widespread, including the closing of Cape Girardeau public and parochial schools. Today is the first snow day of the winter for schools here....

Forecasts are unclear on how long the snow will continue. The National Weather Service was predicting an eight-inch accumulation, with the storm tapering off and ending this evening.

The FAA, however, said the storm cell causing the snow is so large it may continue through Tuesday. With six inches already on the ground at early morning, the accumulation may top 10 inches, an FAA spokesman believes.

Just when it began to look like it would never quit, the skies cleared for a time and Cape Girardeau's largest snowfall in 50 years was over--or nearly so.

The snowfall here, an estimated 15 inches, was the deepest measurement in the State of Missouri, according to The Associated Press.

Estimates of the actual snowfall are difficult, the FAA said, because of drifts.

So while the good news is that it's over, the bad news is another low pressure center is forming in Western Texas and headed this way.

At present it appears that storm center will be to the south of this region, but its effect still will be felt. We may get additional snow Wednesday. The temperature is expected to dip to about zero tonight.

Most of the region is immobilized. The Highway Patrol says many roads are impassible because of drifting snow. People have been urged to stay off the roads unless there is an emergency.

The degree to which it has affected schools, business, and commerce is evident in the fact "that for the first time since we have been in the funeral business, we've postponed a funeral because of the weather," Walter Joe Ford of Ford and Sons Funeral Home said. Other funeral postponements also were reported.