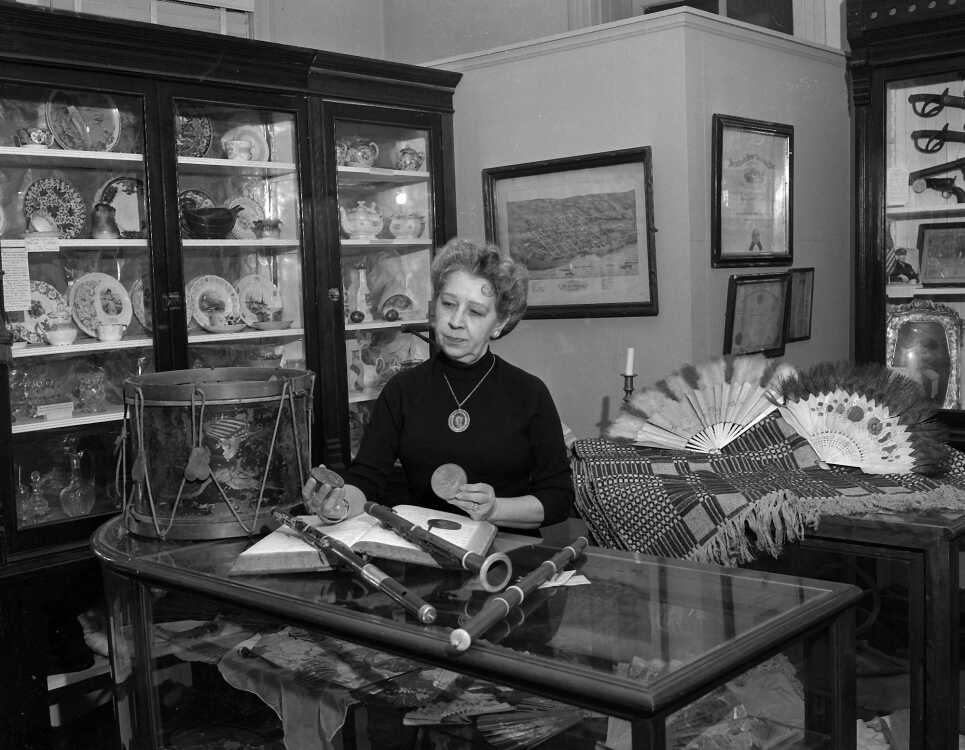 Mrs. Arthur W. Thilenius is shown in the museum at Common Pleas Courthouse in 1961. Below is another photo of the museum. (G.D. Fronabarger photos)

A museum housing many of Cape County's momentos of historic significance, long desired by those who have sought a means of preserving valuable items as a heritage for future generations, will be opened to the public during specified hours from Saturday through Tuesday.

It will be open to the public Saturday from 1 to 5, Monday from 1 to 9 and Tuesday from 10 to 5. Thereafter, regular open hours will be from 1 to 5 on Saturdays and Sundays.

In conjunction with the formal opening of the museum, the city will hold an open house from 1 to 5 Sunday afternoon to show the public the remodeled Common Pleas Courthouse, almost completely redone, inside and out, since re-acquisition of the property from the federal government.

Mayor Walter H. Ford and the City Council have urged residents to come to the open house to see the amazing change that has taken place in the historic, century-old structure.

The museum was erected by J.W. Gerhardt, a member of the historical society, and while compact, holds hundreds of items of exceptional value.

Both wall and floor cases, all glass enclosed, enhance the museum's appearance. The ornate wall cases were built in 1856 and came from the old Wilson Drug Store here. Charles Garber and Martin Hecht contributed the floor cases.

Mrs. Arthur W. Thilenius, president of the historical society, said the oldest object in the museum is a book of funeral sermons in German, loaned by J. Ray Blaylock of Jackson.

Among other Bibles and books on display is a 250-year-old Bible placed in the collection by Miss Esther Knehans.

There are a number of firearms, both pistols and rifles, dating back to the Revolutionary War. The rifles are of various types and form a striking pattern in the large central case.

There is a clarinet dating back to the Seminole War of 1835-1842, and there are fifes used in the Civil War, along with other objects of the conflict.

A pledge signed by many residents of Cape Girardeau to defend the city against Southern invaders during the Civil War is among the items. The original muster list of the city's Home Guard at that time is included.

Of significance in the history of the city are an old fire helmet owned by a member of the volunteer force, and one of the buckets the brigade used in fighting fires.

There are hundreds of other items of a widely varied nature, all loaned to the museum and worthy of the careful viewing of residents interested in the county's historic background.

Mrs. Thilenius said if there had been space, many more cases could have been filled with items offered to the museum. She said an effort was made to select those of the greatest significance.

Miss Ione Hirsch is cataloging every item in the museum and preparing a card describing it and telling by whom it was contributed.

During the time the museum is open two hostesses will be on duty at all times to answer questions or aid visitors.

Hundreds of Visitors Call at Old Courthouse in Cape

Rebuilt Common Pleas Courthouse and the Cape County Historical Society museum on the second floor drew hundreds of visitors at an open house on Sunday afternoon.

City officials and employes, along with members of the society, greeted visitors, answered their questions and told what had been done to the 108-year-old structure and to assemble the museum.

Many visitors, it was noted, expressed their pleasure at seeing the building restored and kept as a point of real historic value to the community. Their comment was keyed with the remark that the building was far more of a credit than a federal building or a new modern structure such as had been contemplated under the courthouse-postoffice trade.

Mrs. Arthur Thilenius said the guest book at the museum showed 440 persons registered, not including children. She said the objects were so attractive to many that they went for friends and returned to show them the museum.

The guest book was placed on a podium made from wood in the recently cut tree planted by Don Louis Lorimier beside his wife's grave at Old Lorimier Cemetery. The tree was at least 156 years old when it died and had to be cut. The podium and a gavel were made by Mr. Thilenius.

The museum will be open until 9 tonight and from 10 to 5 Tuesday. Mrs. W.F. Oehler will be hostess this week. Available to those who come is a booklet, "Facts and Remedies in Grandma's Day," compiled by the society, and a list of prominent men and women buried in Old Lorimier Cemetery prepared by the Riverside Regional Library.

It was announced the formal dedication of the museum will be in late June when the fountain and bandstand are completed.

The register kept by the city showed 450 persons viewed the restored courthouse, not including smaller children.

A committee was to begin today a search for a new home for the Cape County Historical Society Museum that has been in Common Pleas Courthouse here for 12 years.

The committee headed by Dr. Felix E. Snider, director of libraries at SEMO State University, will determine whether to move the museum into an existing building or to build a permanent location.

Generating considerable interest is the century-old Oliver House in Jackson, which is in the process of being turned into a museum for Jackson.

The committee is to study several sites and also the possibilities of obtaining federal funds for constructing a museum building. The committee is to report back to the entire society membership at a special meeting to be scheduled later, according to Earl H. Oldham of Jackson, society president.

The society was notified recently that it would have to move the museum out of its room on the second floor of Common Pleas Courthouse because the court needs more room.

The approximately 50 persons attending a special society meeting Saturday afternoon in Riverside Regional Library at Jackson did not favor any specific site but requested the museum committee make a study and recommendations.

Circuit Judge Stanley A. Grimm of Cape Girardeau explained to society members why the court requires the room occupied by the museum since May 1961. He said a renovation of the court facilities would provide a private conference room for attorneys and their clients. A new entrance also may be constructed. 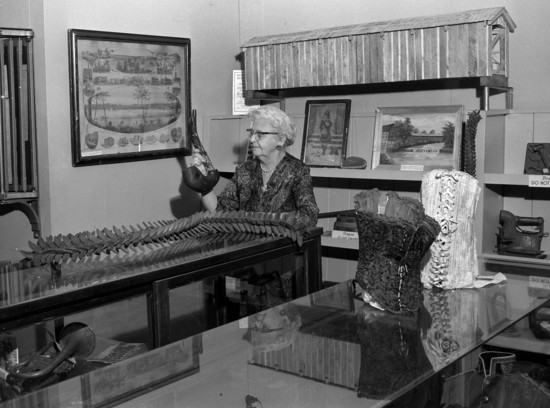