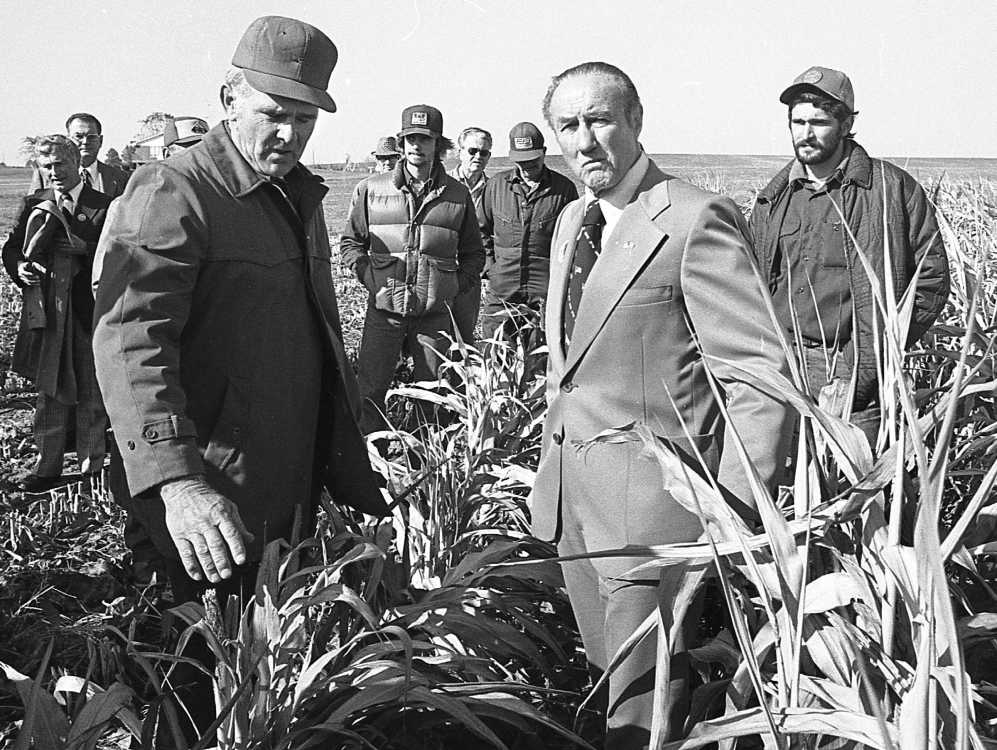 Harlan Hager, who farms near Gordonville, talks with Sen. Strom Thurmond Thursday, Oct. 28, 1976, about his grain sorghum crop and the effects of the late summer drought in this area. The senator was here campaigning on behalf of the Ford for President committee. Behind the senator is Steve Hager, who works with his father on the farm. (Fred Lynch photo)

The purpose of the visit to the Hager farm was to discuss with farmers some of the problems they have experienced during the year.

Mr. Hager pointed out that the Army Corps of Engineers has been involved in a water study of the Cape Girardeau-Jackson area for nearly five years and nothing has been done to prevent flooding of Hubble Creek and Whitewater River, both of which are noted to frequently leave their banks to play havoc with bottonland farmers throughout the county.

Sen. Thurmond, who considers himself a friend of the farmer. has been a member of the Senate since 1954. He received strong support from southeast Missouri in his 1948 presidential campaign.

In 1964, the former South Carolina governor, who hardly shows his age, gave up seniority as a Democrat on Senate committees to join the GOP. He now serves as ranking Republican on the Senate Arms Services Committee. He also serves on Judiciary and Veterans Affairs Committees and on the Select Committee on Intelligence.

He said he is donating his time the month before the election for the President because he is "the best for our country."

He left Jackson for Poplar Bluff where he planned to visit the Veterans Administration Hospital and hold a press conference before returning to South Carolina. He arrived here from Forrest City, Ark., early in the morning after campaigning in Arkansas for Mr. Ford.