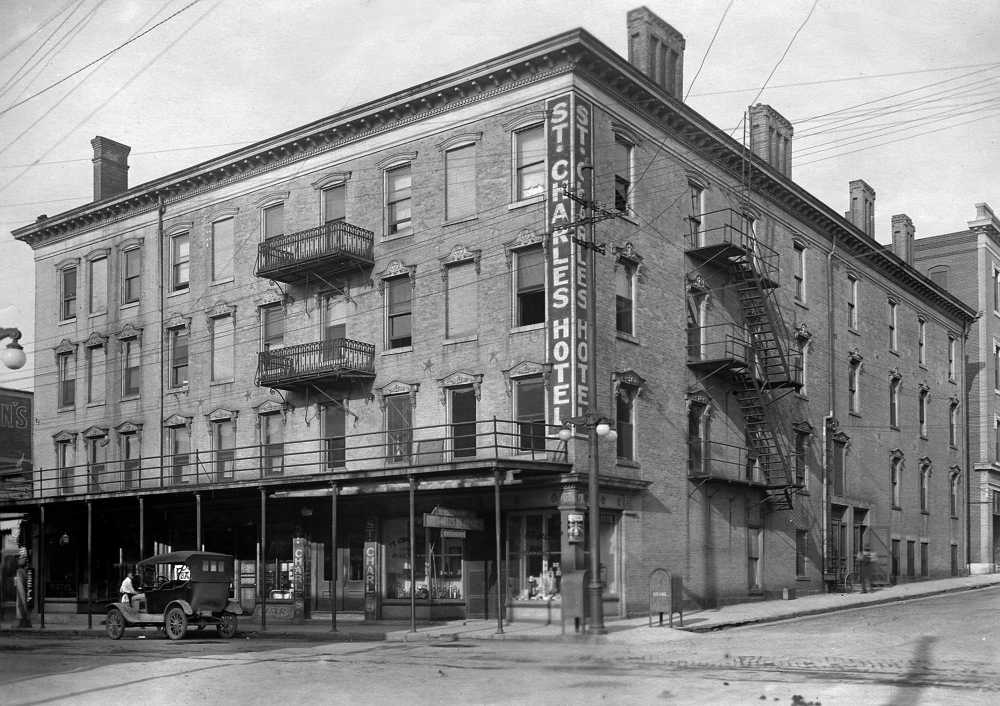 In January 1861, it was announced in a Cape Girardeau newspaper that a magnificent structure was finally completed: The St. Charles Hotel on the southwest corner of Main and Themis streets. The proprietors, Garaghty & Gail, proclaimed the four-story brick building as modern architecture with verandas, an observatory, picturesque views and large ventilated rooms. The hotel featured cornices with dentils and decorative window hoods. On Dec. 16, 1965, the hotel was auctioned off, and Charles A. Hood, the mayor of Cape Girardeau at the time, purchased the building for $55,000. It had an appraised value of $100,000. In February 1967, the hotel was razed to make room for the Sterling variety store. (from Lost and Saved Landmarks)

One of the earliest operators of the St. Charles Hotel--which was designed by Joseph Lansmon, who also was the architect for the Common Pleas Courthouse and St. Mary's Cathedral--was Zalma Block.

Block came to Cape Girardeau from New Orleans some time after 1852, and he apparently first operated the New Johnson House, which later was renamed the Riverview Hotel. During the Civil War, the Riverview was used by federal soldiers as a hospital and officers' quarters.

Several years after the war, Block assumed control of the St. Charles. With the aid of his wife, the former Matilda Rodney, he ran the hostelry until his retirement Feb. 8, 1886.

The St. Charles was the leading hotel in Cape Girardeau and the center of social activity.

"The St. Charles corner was one of the busiest places in town," Lee L. Albert, who has written of Cape Girardeau history, recalls.

Gen. U.S. Grant, then commanding the western armies of the Union, was the honored guest of a ball at the hotel in July or August of 1862.

When Mark Twain was a riverboat pilot, he made stops at the St. Charles, history reports, and Charles Dickens was said to have spent a night at the hotel during a lecture tour.

But the hotel was best known for the magnificent balls that were held to commemorate notable events and happenings.

For example, Cape Girardeau news accounts of a leap year and centennial party held there in 1876 were as follows:

"The St. Charles Hotel, on last Friday evening, was crowded with a brilliant party, gotten up by the leading young ladies of our city for the purpose of entertaining the young gentlemen, and to treat them to one of the finest balls that ever came off in this magnificent hotel."

The hotel also can be said to be in one sensed the birthplace of Southeast Missouri State University. It was in the parlor of the hotel, on Oct. 28, 1873, that a state board met and decided to put the Third District Normal School at Cape Girardeau.

But the St. Charles also is known for an infamous guest it housed in the 1850s--a seriously ill man removed from a boat and taken to the hotel, where he soon died of cholera. From that start, a cholera epidemic spread through the community, taking many lives.

The primary competition came from the Riverview Hotel. The Riverview had a larger dining and ballroom. Albert recalled: "But the St. Charles was more homelike and the young set seemed to like it the best."