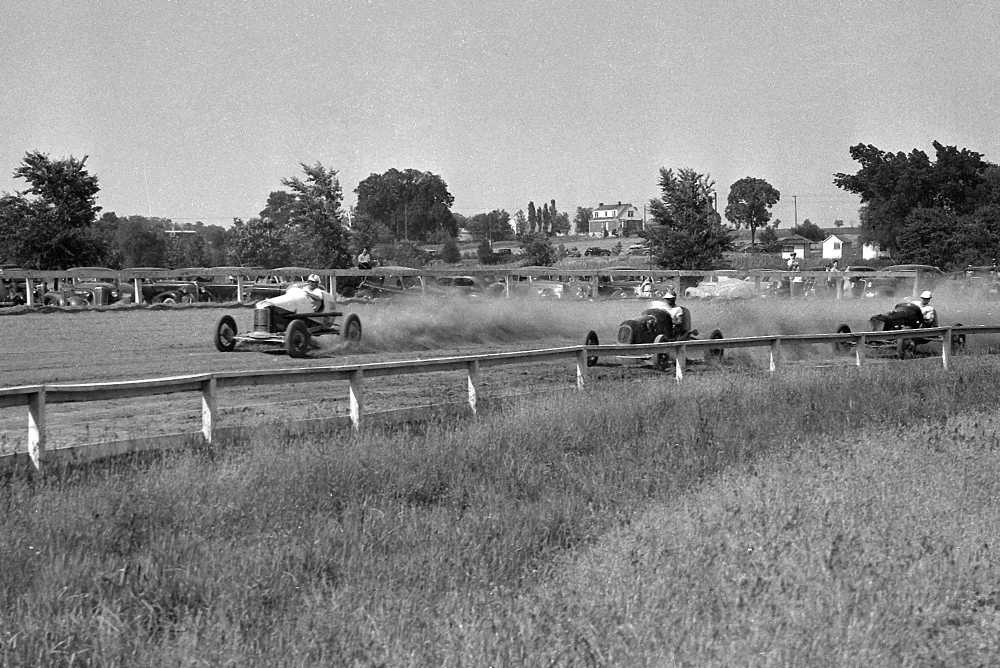 These midget auto racers were captured by G.D. Fronabarger in this undated photo at Arena Park in Cape Girardeau. This race appears to be on the main track. A fifth-mile track was built for the races inside the main track as described below.

Overtime work was on the agenda for American Legion members this week, it was brought out by a committee meeting Wednesday afternoon, as the organization, going over the flaws which developed in the first of 13 midget auto races earlier this week, prepared a smooth running performance Monday night at new city park.

First big job on the list is a complete repair job on the fifth-mile oval over which the doodlebugs race. The crawfish soil of which it is composed refused to soak up the excessive amount of water placed on it at the insistence of officials of the St. Louis Midget Automobile Racing Association before the races were held.

The straightaway was placed in good shape, and needs only to be rolled and further packed. But on the backstretch, still gummy and as bumpy as a logging road, plows have done a thorough job of uprooting the wet soil.

To Get Clay Coating

It will be allowed to dry, rolled and packed smooth, and then, probably, receive a layer of clay for a billiard table smoothness which will allow drivers in future races to inch every bit of speed possible from their roaring machines.

Followers of the midgets noticed that on Tuesday night one of the two top drivers, Ray Knepper of Lebanon, Ill., driving the new No. 45, was the only entrant in the St. Louis races to win two events.

George Binnie, of Kansas City, who drove No. 20 to three victories here, overcoming Knepper in two close events, couldn't keep pace with the Illinois lad and was forced to a second place in his elimination round. He failed to place in the handicap or feature event. Knepper not only won his heat, but also the handicap feature in St. Louis. 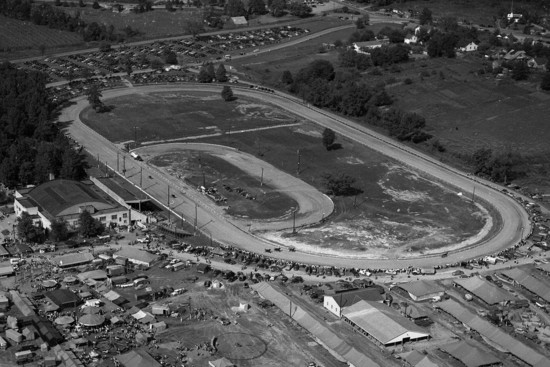 This photo shows the fifth-mile track inside the main track at Arena Park.

A sport which caught the fancy of all southeast Missouri last summer will make its 1948 inaugural Monday night when the first of 16 weekly midget automobile races, with all their thrills and spills, gets underway at the Arena Park speedway under the auspices of the Louis K. Juden Post, American Legion.

An enlarged seating capacity, capable of accommodating crowds upward of 4,000 persons, a canvas backdrop and wire fencing, along with a vastly improved track and facilities of operation will greet fans when diminutive speedsters begin their roaring grind around the track.

The time trials Monday, as every night during the season, will get underway at 7:15 o'clock with the first of the series of speed events to begin upon their conclusion approximately an hour later.

That racing will be far above the efforts of last season is shown by the fact that the drivers' purses will be upped this year from $750 a night to $1000. The added money on which the midgets will ride is expected to be a great incentive to top-flight cars on the entry list.

In face, officials who have made contact with the St. Louis Midget Automobile Racing Association, under whose sanction the program is held, report that there will be more cars than ever before entered in the weekly programs.

They predict that no less than 25 to 30 of the powerful Offenhausers, V-8s, and other makes will be on the track ready to go each racing night. Last year there were rarely over 15 of the bantams on hand.

So the track may be more adequately prepared for its heavy duty work this season, water lines have been placed to the infield so the oval can be more properly wetted down. Drainage has been improved by laying of tile.

The 1948 season of midget races at Arena Park, sponsored by the American Legion, will be brought to a close Sunday night in what is expected to be the best night of racing of the season. A card of around 20 cars is expected, led by Red Hamilton who has been burning up all the tracks with his speed the past week. Other drivers on schedule include Joe Bulan, Al Hager, Shorty Burns, Orville Martin, Ben Chesney, Jack Daugherty, Ed Tegethoff and Russell Fox. The latter will drive the Offenhauser car owned by Charles Harris of Cape Girardeau.

As an added attraction, Legion officials are to present a cup to the winner of the feature race, the last event of the night. Along with the cup, the winner will also receive the regular money award.

Legion members have been working all week getting the track in condition, and today it was reported in the best shape it has been for any of the previous races. Time trials will get off at the usual time of 7:15 o'clock.

Due to the lack of patronage, the weekly midget auto races, held at Arena Park under the auspices of the American Legion, are to be abandoned for the season according to Paul Spitzmiller, commander of the Legion post. The ones Monday were the sixth of nine weeks of racing scheduled this year, two nights being rained out and a third one called off because of the tornado. The races were held in 1947 and again in 1948. The races were to have been concluded on Labor Day. Legion officials were disappointed in Monday's attendance which was 2100, which was less than the number expected. The races have been drawing around 1500 fans each night this season, an attendance which about pays expenses, Legion officials said. 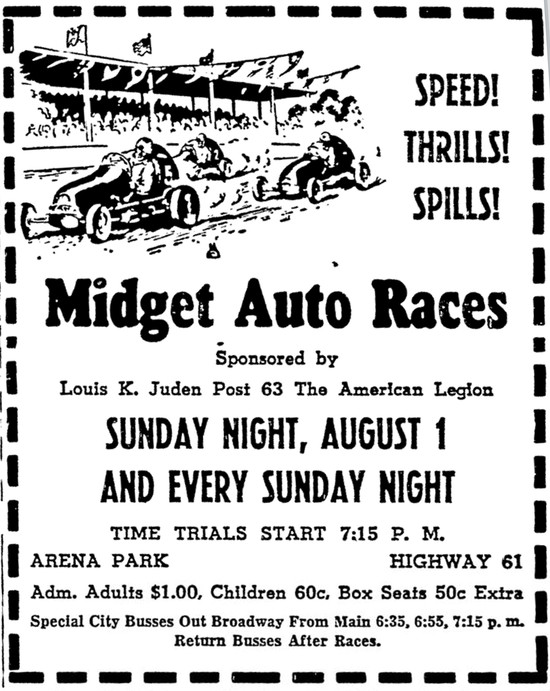