Elvis to appear in Cape 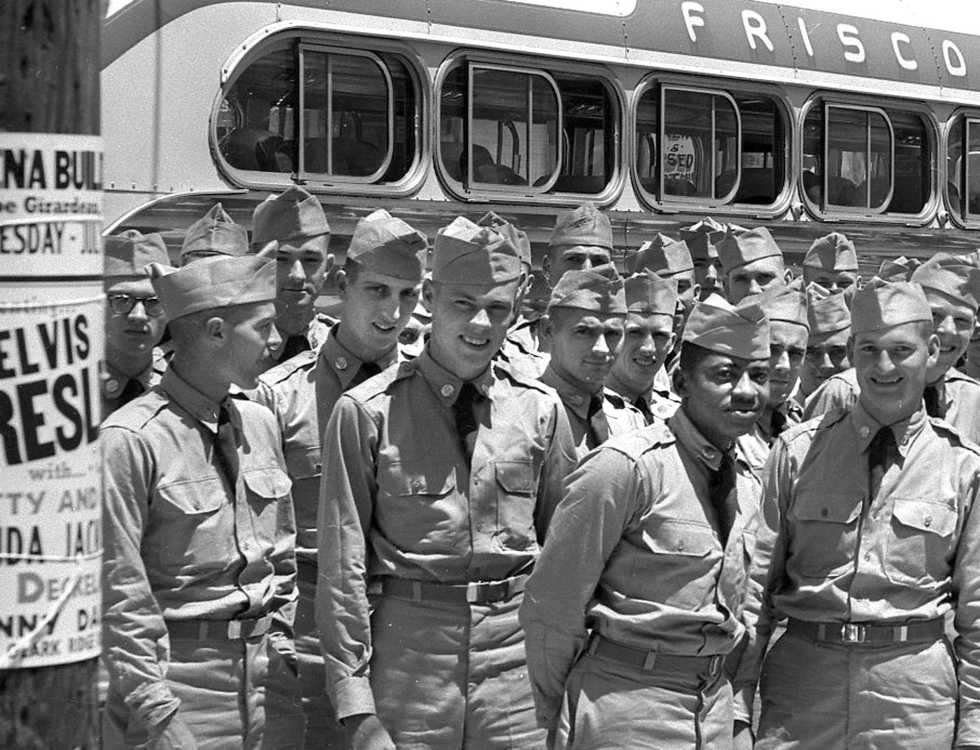 A poster promotes the upcoming show featuring Elvis Presley on July 20, 1955 at the Arena Building in Cape Girardeau. This photo was published July 18, 1955 in the Southeast Missourian. Here is the caption:

Cape Girardeau took on somewhat the appearance of a military center Saturday when nearly 300 soldiers stopped to eat the noon meal while en route from Fort Leonard Wood to Fort Knox, Kentucky. Mostly recruits, they had been to Fort Wood to be outfitted before being integrated with established units at Fort Knox. (G.D. Fronabarger/Southeast Missourian archive)

The Southeast Missourian ran a city brief the next day:

BENEFIT--A variety show featuring music, comedy and dancing was presented before approximately 300 persons at the Arena Building Wednesday night under the auspices of the Southeast Missouri chapter of United Cerebral Palsy. Headlining the program was vocalist, Elvis Presley, recording artist, whose program was well received by the audience. John Daume and his Ozark Ridge Runners also made a hit with those attending.

Presley's music was described as a combination of "country music with modern-day bop." Among his listed hits were "Blue Moon of Kentucky," "Good Rockin' Tonight" and "That's All Right, Mama."

At 20, Presley was just two years out of high school when he performed in Cape Girardeau. The summer before he had recorded a few demo songs for Sam Phillips of the Memphis Recording Service, popularly known as Sun Studio. Though Phillips was impressed enough with Presley's talent to team him up with a few local musicians, none of the songs had the sound that Phillips was looking for.

Presley continued to work as a delivery driver for Crown Electric Company in Memphis for several more weeks in 1954, driving a truck during the day and singing in small clubs at night. His one appearance on the Grand Ole Opry later that year was not very successful. One Opry official suggested that Presley go back to driving the truck.

Elvis auditioned for the television show "Arthur Godfrey's Talent Scouts" in the spring, but he failed to be accepted. He continued to tour which led him to Cape Girardeau in the summer of that year.

On the day of the performance in Cape Girardeau, the Southeast Missourian referred to Presley as "the fireball from the Louisiana Hayride." The next day the paper said that his performance was "well received by the audience." Nothing else was said of his performance.

Four months later, Presley signed his first contract with RCA Victor Records, the label on which he would record for the rest of his life. Presley's manager, Colonel Tom Parker, negotiated the sale of Presley's Sun contract to RCA for an unprecedented $40,000 with a $5,000 bonus for Presley.

In January 1956, Presley recorded his first single for RCA, "Heartbreak Hotel." By May, the song would be No. 1 on the Billboard chart.

Within a year from the time he appeared in Cape Girardeau, he appeared twice on "The Milton Berle Show" and once on "The Steve Allen Show." By August he appeared for the first time on "The Ed Sullivan Show" and began filming his first movie, "Love Me Tender."

Wanda Jackson, one of the performers in the Cape Girardeau show with Presley, shares her memories of Elvis with a photograph of the two in this story published Sept. 11, 2008: